You’re Not Making the Godfather: Quit Taking Your Training So Seriously

While it’s great to have passion about your fitness, it’s not healthy for the long-term to act like you’re headed for the Olympics. It’s time to look at the big picture.

Back when I was in film school at the University of Southern California, there was a phrase that popped up from time to time: “What does he think he’s making, The Godfather?” It was something said when a student-filmmaker’s behavior and attitude about his or her project was rather bloated compared to the actual quality and importance of the piece. He wasn’t making The Godfather, he wasn’t going to become a world-class director or win any Academy Awards, but rather he was making a five-minute, Super-8 flick that might get shown in years to come at family get-togethers. Chances are he’d have learned more about the filmmaking process if he saw his piece as what it was, too.

Now, years later, as a coach and personal trainer, I sometimes find myself wanting to ask my clients a similar question. There is a breed of client that attacks workouts and competition as if they were Olympians – only, they’re not. And while I fully support having passion for all your endeavors and setting scary goals for yourself, if you’re not an elite athlete (and chances are if you’re reading this, you’re not) then you also have to have a little drop of reality in that big pool of passion.

I know, I’m a killjoy, right? I’m a dream-smashing curmudgeon.

But let me explain a little, and I’ll start by giving you an example. The other day my friend Katrina texted me asking for advice. Given that Katrina has recently become quite gung-ho about both Brazilian jiu jitsu and CrossFit, I suspected something bigger might be at the root of her question.

The following is how the text message conversation went down:

Katrina: Do you think kinesiotape has any benefit for my shoulder injury?

Me: What is the injury?

Me: When did you injure it and did you rest at all?

Katrina: Did it in BJJ on Monday. I compete tomorrow. I took one full day off CF and BJJ, then trained BJJ, but no arms at CF until yesterday. Now it hurts – shoulder/bicep, also in the back near neck.

Me: You need to not compete and stay away from either gym for a bit. KT tape is not the answer.

Katrina: I can’t NOT compete.

Katrina: Yes, a metaphysical one.

Me: Ah, well, I only coach in reality. Reality says rest and ice and have a long, productive athletic career well into your black belt years by taking care of yourself now. If metaphysics wants you to f$#@ yourself up and never earn a black belt and get arthritis, then so be it.

Katrina: So, that’s a yes on the KT tape?

So, here’s the deal. I’m “tough love Becca” because I screwed it up for myself the first time around and I’d really like my clients not to do the same. I’d really like you not to do the same. I used to be crazy gung-ho about BJJ, CrossFit, and a slew of others things, as well. And now I’m carting around a basket of injuries that years ago I never really noticed, but as I age they stick out more and more – like a spring working its way out of a cushion.

When I was neck deep into all the athletics that I was doing, nobody talked to me about mobility and recovery. Nobody told me to take a break. What they did do was “ooh” and “ah” when I said I was training two or three times a day. What they did do was help me tape my hand up like a flipper when I popped my thumb, so I could keep rolling in jiu jitsu. I got a lot of encouragement, but I didn’t have anyone to put it into context for me, to explain that it wasn’t just about making it through today. 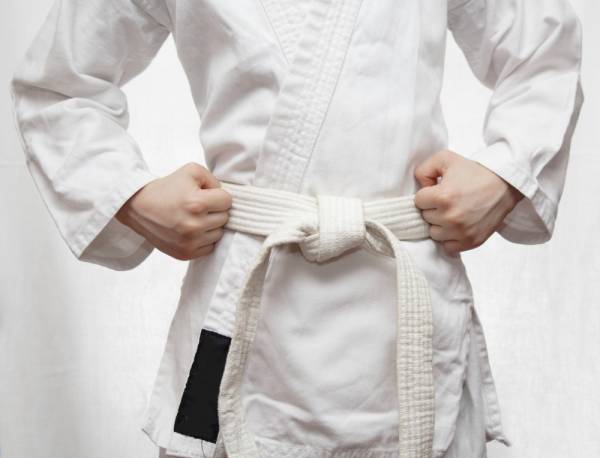 When you find a team, it’s an awesome thing and they will love and support you forever. But they are usually just as warped as you. They’re not going to tell you to stop when you need to stop – ‘cause then they might have to stop, too. Your teammates, and possibly even your coach, aren’t equipped with any bigger perspective than you are. They’re not going to tell you that being a “world champion white belt” is maybe a goal that’s okay not to pursue.

Because what real world champions do to their bodies isn’t healthy. And a good coach who sees you in your life and in the bigger context isn’t going to let you pursue a fantasy at the risk of your long-term health and happiness. A good coach will tell you to set goals that make you nervous, goals that seem “impossible,” and yet at the same time reasonable. They could happen in your life.

It all comes down to risk and reward, and sometimes we get so excited about an activity, about a community, about an emotional or hormonal reward we get from working out, that we forget we’re human after all.

It wasn’t until Andy Petranek kicked me out of his gym that I got my head straight. I realized training for a muay Thai smoker wasn’t worth not being able to walk. And the older I get the more I wish I’d just slowed the @%^# down when I was younger. And maybe that’s normal. Maybe that happens to all people when they get older, and maybe I wouldn’t be who I am now if I hadn’t had a few screws loose back then. And maybe I should think of the loose springs in my proverbial couch cushion as “character.”

Or maybe, I can really hear the lesson now and be in better shape for all the years I’ve got left. Because I’ve got a lot of years left – and so do you. Let’s make the most of all of them, and not just the ones early on.

The next time you get injured and want to push through it, ask yourself: