I’m the type of guy who, when given the choice and when both options are equally effective, would rather fix something with a sledgehammer than a scalpel. Most common squat and deadlift problems meet this description. You could fix them with accessory exercises and isolation work, but I’d rather keep a loaded bar on my back or in my hands while simultaneously relearning or ingraining proper motor patterns. You can use resistance bands to accomplish this purpose, as long as you have a little imagination.

The Problem: Gravity Only Pulls Down

Let’s start with a statement that’s so entirely obvious that people rarely recognize it’s a problem: gravity only pulls down. When you’re trying to lift a weight, gravity is trying to pull it straight to the floor. Why is this a problem? Well, our muscles don’t all produce force perpendicularly to the floor, directly opposing the pull of gravity. They cause movement at joints in all planes and at many different angles to produce angular motion – eventually resulting in the movement of weight against gravity.

When you’re trying to strengthen a particular muscle or group of muscles in a given pattern, any external load provides maximal resistance when it’s applied parallel to the direction of limb movement. To illustrate, hold a dumbbell at arm’s length directly in front of you while standing, keeping your arm parallel to the floor. I guarantee your shoulder will fatigue in that position faster than it would if it was held 45 degrees above or below parallel. That’s because when your arm goes above or below parallel to the floor, the direction at which you’re applying force to the weight is no longer parallel and directly opposing the pull of gravity, and the aspect of the lever arm in the sagittal plane is shorter, so the muscles of the shoulder have to produce less torque to hold the weight in place. 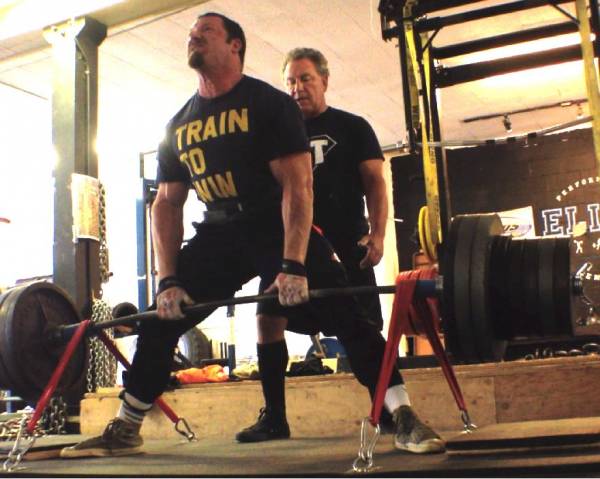 With that previous discussion in mind, now we can talk about how to use bands to address weaknesses and imbalances. Bands don’t have to pull straight toward the floor like gravity does. That freedom allows us to pull joints and limbs in other directions to more directly oppose the actions of the muscles or patterns that are holding us back.

You can use bands for this purpose in two different ways. You can add band resistance on warm-up sets as a tactile cue to get your muscles firing properly, then remove band tension and let the primed firing patterns carry over to improved performance on your heavy sets. Or, you can decrease weight a little bit and leave the band tension in place for your work sets, biasing the muscles or aspect of the movement that’s weak.

There are three basic things you have to accomplish with a deadlift: holding onto the bar (which is outside the purpose of this article), extending your hips, and keeping your back extended. There is some knee extension as well, but most people can quarter-squat way more than they deadlift, so knee extension is rarely the limiting factor for someone’s pull.

Hip extension is typified by forward movement of the hips. So to bias the hip extensors, a force trying to pull the hips backward (as in the weighted glute bridge or hip thrust) is optimal for focusing on the pattern. To accomplish this, you can anchor a band behind you and put the other end around your waist. By doing so, when you’re trying to push your hips forward to finish the lift, the added band resistance pulling your hips backward is perfect for engaging the glutes and teaching you to get your hips through.

The other problem is with the back rounding, either simply leading to potentially dangerous form or causing you to be unable to finish the lift. This could either be due to not setting the lats properly or having weak spinal erectors. To fix poor lat engagement, you can set light bands up in front of you and put them around your wrists so you’re forced to engage your lats to pull the bar back toward you.

To train or engage the spinal erectors, you can set a band up in front of you and put it around the back of your neck so it pulls your thoracic spine forward, attempting to round it over and making lockout more difficult.

The squat also requires maintenance of spinal and hip extension, but knee extension plays a much more important role for the squat. You could set up a band behind you to bias hip extension for the squat, just like you did for the deadlift. However, I don’t think that’s a prudent idea due to the chance you’ll lose your balance and the band will pull you backward onto your butt with a loaded bar on your shoulders.

You know you have relatively weak knee extension if your squats all tend to end up looking like good mornings. Your body is finding its strongest position, and if your quads are weak that means straightening your legs out prematurely to finish the lift with your hamstrings and glutes. To work on this problem, you can set bands up in front of you and put them around the back of your knees. The bands pulling forward will resist knee extension, much like a terminal knee extension. The bands do two things: they pull your knees farther forward in the first place, which will make the lift more quad dominant, and they make it more difficult for your quads to extend your knees, giving the quads extra work and helping them catch up with your hip extensors.

If you have a problem with your back rounding when you squat, you can address it similarly to the deadlift, with a band around the back of your neck anchored in front of you. I’d recommend using front squats for this variation so you can dump the bar if you start caving forward. Dumping a back squat over your head isn’t much fun.

Last but not least, a lot of people have problems with shifting weight to one leg or another in the squat. To fix this problem, you can set up one band in front of you and put it around the back of your weak leg. The band tension will help shift your hips toward the neglected leg, and the band will work to resist knee extension, giving the lagging leg more work to help it catch up to the stronger leg.

Odds are this article has some tricks to help you get over your hurdles on the squat or deadlift. You can also apply these principles to bring up weaknesses in almost any movement. You just have to be a little creative.

Have you worked with bands in your lifts? How did you use them and did it help? Post your experiences to the comments below.

Greg is a strength coach finishing a degree in Exercise and Sports Science. He's a competitive powerlifter with several all-time, drug-free records in the 220 and 242 weight classes, including best competition lifts of 750 on the squat, 425 bench press, and 710 deadlift.

You can find him on Facebook and Twitter usually talking about fitness, science, and beards. He keeps a blog bringing cutting-edge information and detailing his training at Greg Nuckols.