Fructose Is Bad for Your Body and Your Mind

Scientists took a close look at the impact of fructose, specifically high fructose corn syrup, on the bodies and minds of people – and found nothing good.

When I look around today I see an interesting polarization of the population. Obesity is on the rise, as we all know and hear about all the time, but it seems like the number of people interested in fitness and healthy nutrition is also on the rise. It may be a rejection of the trend toward increasing waist lines, but we are all participating in it, even just by reading this article.

One theoretically major part of the decline of public health has to do with fructose, specifically, high fructose corn syrup (HFCS). A recent report in the Nutrition Journal did a thorough examination of what fructose might do to a person or a whole population of people. Researchers sought to define the impact of fructose by looking at both what the calipers might tell us and what an IQ test might tell us.

Fructose is one of those things that could be said to be natural. Indeed it is a commonly occurring natural sugar, sounding not unlike the word fruit, where this sugar can frequently be found. Fruit is good for you, and fructose is natural, so it seems on the surface like it may be a healthy option. The reality is this is false. In the quantities found only in a modest amount of dietary fruit, fructose might be plenty healthy, but that’s not the end of most people’s intake.

This chart show the relative sweetness, even just with HFCS that is 42% fructose: 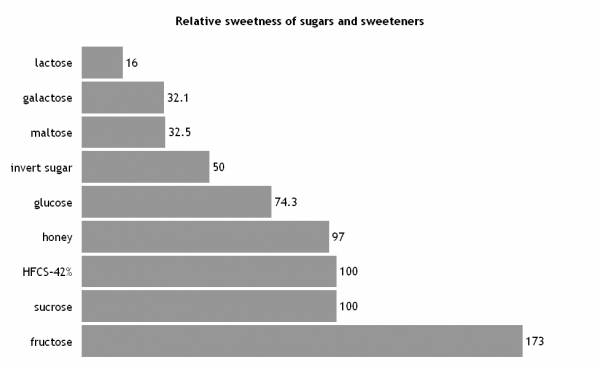 One of the things that makes HFCS so bad was originally what made people think it was good. As a kid I remember the diabetic adults in my life being recommended by doctors to eat fructose sweetened foods as a healthier option. This was because despite being sweeter than many sugars, fructose doesn’t cause the same insulin response, and so was deemed better for preventing metabolic diseases like diabetes. Unfortunately, this feature doesn’t eliminate fructose from the adiposity, dyslipidemia, and insulin resistance promoting effects of sugars in general, but it makes it less satiating than other sugars. So it’s just as bad for you and will leave you hungry for more – a double whammy.

But that’s not all. Metabolic syndromes have demonstrated associations with cognitive impairment, so the researchers in this study also looked for this link in the available literature. The original research on this involved rat subjects that clearly showed a link. Recently more research using humans examined multiple sugars, and sure enough, many of them (fructose included) were associated with cognitive impairment even in otherwise healthy individuals. So perhaps the beginning of cognitive decline into diseases like Alzheimer’s may start with sugar. Interestingly, there was no link found with naturally-derived fructose from fruits.

Of course, it goes without saying but I’ll say it anyway – avoid processed foods with added sugars, and eat healthy natural foods including fresh fruits. For those with friends or family who need the extra push, point them toward eliminating HFCS especially. Let’s get this stuff off our tables.

1. Lakhan and Kirchgessner, “The emerging role of dietary fructose in obesity and cognitive decline,” Nutrition Journal, 12:114, 2013.