I live in an area that hosts a lot of pheasant shoots, so there is an abundance of great value meat from those and from rabbits, too. Game meat in general tends to be an excellent value, high-quality source of lean protein that tastes amazing.

Historically, game meats were accompanied by rich, indulgent sides representing the affluence of the landowners. It is my intention to stay true to some of the classic combinations but not make them so rich that you feel like Augustus Gloop.

I call this Rabbit Ragu, but it is a good recipe for almost any meat. It’s basically just old-fashioned cottage cookery, the likes of which have been prepared in my draughty little abode for generations. Meat browned (or not) and simmered with mirepoix vegetables – carrots, onion, and celery or fennel. Obviously, I then make a few additions, but nothing scary.

The beauty of this kind of cookery is that it automatically comes with at least three portions of veggies. And any protein locked up in connective tissue is liberated through the long slow-cooking process.

“It’s basically just old-fashioned cottage cookery, the likes of which have been prepared in my draughty little abode for generations. Meat browned (or not) and simmered with mirepoix vegetables – carrots, onion, and celery or fennel.”

This recipe is great served with some broad pasta like pappardelle if you are okay with carbs. I only occasionally use pasta and I only ever use wholewheat. Here, I have kept it super healthy by serving it with braised lettuce, which is both delicious and a tad vengeful, as my vegetable garden failed. 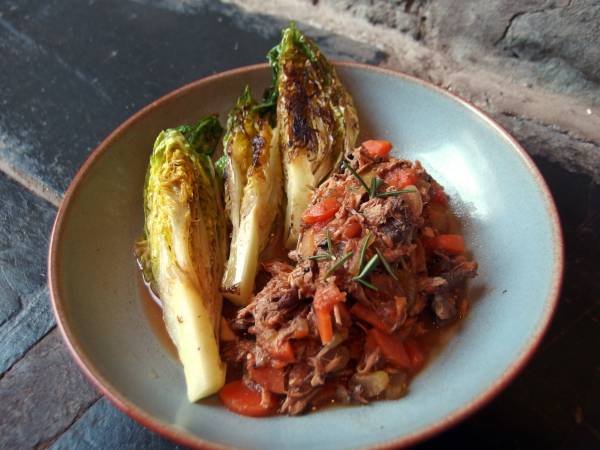 Note: A “rasher” of bacon is simply another way to say a “slice” of bacon. Drawing a blank in my mind as to its origin and meaning, I hastily deferred to Britain’s breakfast food expert and author of “The Breakfast Bible,” Seb Emina. He quickly pointed me in the direction of this little gem: “Rasher on the coales, q. rashly or hastily roasted.” So there you have it. The term seems to refer the speed of cooking. I thought it was to do with a ration or allowance, which shows how much I know.

This recipe was one of those educated-guess experiments that didn’t end with toast for dinner, which does happen. Instead, we now have a new regular dinner fixture. I love game birds or chicken with roasted potatoes and bread sauce, but that is clearly a carb-on-carb nightmare. So I put the wonderful bread sauce flavors into some braised pearl barley (also known as “risotto-not-risotto”), a better quality source of carbs, with roasted root vegetables on the side.

Here are a couple of helpful hints for preparing your game bird for the oven. Hopefully you can get your friendly neighbourhood butcher to do this, but it is easy enough to do yourself.

There, that wasn’t difficult, and neither is the rest of this recipe. 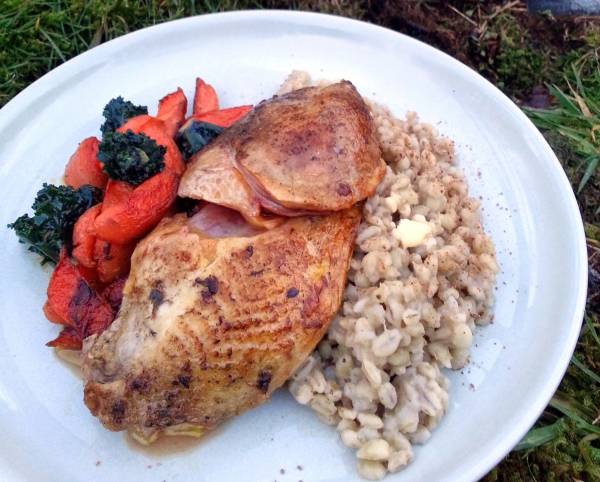 Although there was nothing particularly challenging in the first two recipes, I did make you wait a while to reap the fruits of your labor. So I thought I should offer you a quickie. And if you are a bit of a foodie, this is an opportunity to show off your farm shop deli find of fantastic paprika in a cool tub.

The only variation between this stroganoff and any other is the protein. So if you fancy it, swap the venison for the traditional beef or try pigeon, pheasant, rabbit – whatever, really. It is a great recipe for lean meats, so perfect for game, and the spiciness is more a familiar flavor than game to the modern palate. It works well as a gateway recipe to explore the wonderful high-quality, thrifty world of game.

“There are loads of stories as to the origins of this dish. The one I like the most, and the one that is most appropriate for the Girevik Chef (my professional alter-ego), is that it was created for Pavel Stroganov.”

I have left the recipe pretty traditional, but changed the accompaniment. Matchstick potato fries are a popular side dish for stroganoff. Although I don’t think potatoes or fats are the devil, increasing the surface area of a starchy vegetable to ensure it absorbs as much fat as possible is a bit too far. So I have served it with a celeriac and apple salad that visually evokes the matchstick fries, but also brings the lovely combination of fruit and game to the table.

There are loads of stories as to the origins of this dish. The one I like the most, and the one that is most appropriate for the Girevik Chef (my professional alter-ego), is that it was created for Pavel Stroganov. 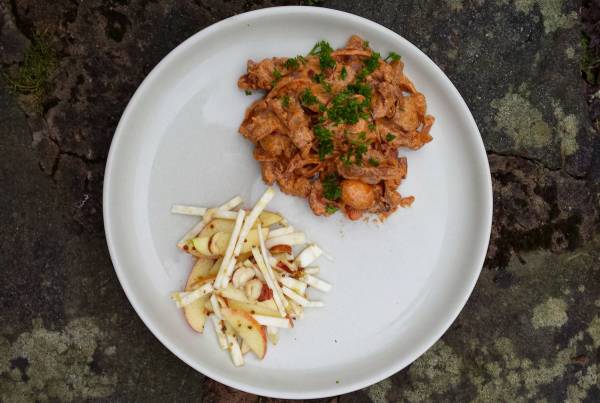