Getting Started With Juicing: What You Need to Know

Juicing has become popular over the past few years, in part due to the popularity of the 2010 documentary “Fat, Sick, and Nearly Dead.” If you want to try it, here are essential things to know.

Do you juice? If not, maybe you should. To clarify right off the bat, this article isn’t going to be about steroids, Jose Canseco, or the Miami Biogenesis Clinic. I’m talking about including raw, fresh-pressed vegetable juices into your diet to optimize your health and athletic performance.

Juicing has become incredibly popular over the past few years, in part due to the popularity of the 2010 documentary Fat, Sick, and Nearly Dead. In it, overweight Australian Joe Cross filmed his transition to health by going on a sixty-day juice fast and traveling across the United States inspiring people with his story. If you haven’t seen it, you can check it out via Neflix Instant or on YouTube. The Wall Street Journal even reported in 2012 that sales of home juicers were up 71% over the year.

So the question is, should you jump on the bandwagon? In a word, yes, but there are many misconceptions about juicing and how to go about it. Here are some of the most important things you need to know to do it properly:

The Benefits of Bioavailability

Why should we drink juice in addition to eating raw vegetables and fruits? Whereas solid food requires several hours to digest, juicing separates the water and nutrients from the fiber of fruits and veggies, which enables the body to assimilate the micronutrients (vitamins, minerals, and phytochemicals) contained within the plant in minutes with minimum effort from the digestive system. This helps the body conserve vital energy and allows for maximum nutrient bioavailability (absorption).

Many vegetables contain incredibly powerful compounds that are only activated when their cell walls are sufficiently broken down, and juicing is one of the most effective ways of doing that. For example, breaking down the cell walls of cruciferous vegetables like kale, cabbage, and broccoli activates their potent cancer-fighting phytochemicals known as isothiocyanates. While you can certainly create these chemical reactions by chewing whole foods, most people don’t chew their food nearly enough to be effective at it.

Not all juice is created equal. The only juice you should consider healthy is freshly made unpasteurized (aka raw) juice made primarily from vegetables. The bottled fruit and vegetable juices you typically find in the aisles of your grocery store have been boiled to oblivion and have lost all of their beneficial enzymes and almost all of their nutrients, basically leaving you with just sugar water.

It’s not a quick fix weight loss solution, but it may help you get leaner over time. Juice fast crash diets are pretty popular right now, but they can be problematic if they’re used incorrectly. Most people use them as a detox from their unhealthy lifestyles and after they’re done with the fast, they go right back to eating and drinking unhealthy foods, which negates the whole concept of the fast. However, a short juice fast can be worthwhile if it’s used to jumpstart a transition to a healthy whole foods plant-based diet. If you’re very overweight, a longer juice fast may be beneficial, but make sure you don’t do anything that serious without supervision from a doctor.

In my experience, it’s much better to consider juicing as a high-powered supplement to an already healthy diet. Drinking a fresh juice before eating a meal will help you feel full more quickly, since the receptors in your stomach will recognize the large amount of micronutrients present in your system. The reason why you can feel hungry shortly after eating a big unhealthy meal is because your body realizes you haven’t consumed enough micronutrients for it to function on an optimal level. Over time, flooding your system with high amounts of micronutrients may help you feel more satisfied and reduce food cravings or what Dr. Joel Fuhrman, author of Eat to Live, calls “toxic hunger.”

Juicing may help increase athletic performance. Many plant-based athletes incorporate juicing into their diets, including endurance athlete Rich Roll and fitness model and bodybuilder Chad Byers. In addition, several scientific studies have suggested certain fruits and vegetables (beets in particular), when juiced, actually increase the oxygen-carrying capacity within your bloodstream. Exercise also creates a lot of oxidative stress in your system, and since you can drink five times the amount of veggies you would be able to get if you ate them whole, you end up getting that much more in the way of protective and restorative vitamins, minerals, phytochemicals, and antioxidants rushing through your system.

Watch Out for Sugar 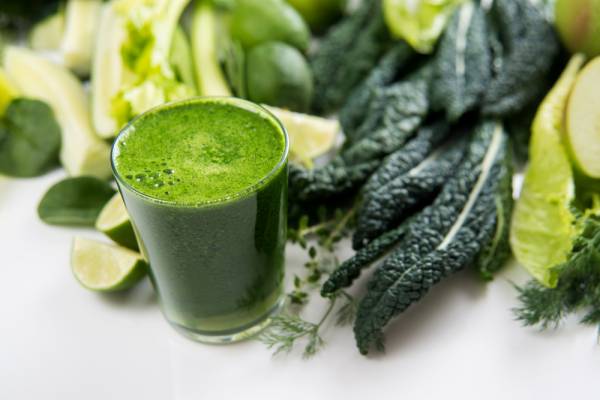 Don’t overdo it on the high-sugar vegetables and fruits. One thing to be careful of when making or buying juice is the sugar content. The same principle that allows nutrients from juice to be absorbed so easily into your system also applies to sugar, and that’s not necessarily a good thing. So when in doubt, limit the amount of carrots, beets, and fruit in your juices. Try to make the overwhelming majority of your juice from leafy greens, other veggies such as cucumber, celery, and peppers, and add a bit of low-sugar fruit such as lemon, pear, or apple to sweeten it up if need be.

Making juice isn’t just for cold drinking. One of the best uses for fresh juice is in soup bases. A combination of celery juice, carrot juice, and filtered water makes a fantastic substitute for salty vegetable broth. In this case, since you’re consuming it within a pot of fibrous veggies and beans, the sugar content of the carrot juice isn’t such a big deal.

Make sense? I know it’s a lot to take in, but if you start simply by drinking a juice once or twice a week, it won’t be overwhelming. In my next post, I’ll go over the different kinds of juicers on the market and which ones you should consider buying, some of the best places around the country to buy pre-made juices, and my favorite recipes.