Hard Work Is Worth the Sacrifice (Athlete Journal 39)

Even though it’s challenging to train as much as I am right now, it’ll all pay off at my next meet.

First off, I celebrated my twentieth birthday this week! It’s really weird not being a teenager anymore. At first I was a little scared of leaving my teens because it made me feel really old.

I thought more about it, though, and I think it might help people take me more seriously. I’m not some kid trying to scrape by in the jiu jitsu world anymore. I’m a responsible adult who can fend for herself. It’s amazing what a silly number can do. I still have to get used to saying I’m twenty, though!

Training was great this week. I feel like I’ve been working insanely hard lately. I’ve been continuing with running and lifting and I’ve even started doing the morning classes to get extra drilling and rolling in. Even though it’s challenging to train as much as I am, I know at the New York Open it’ll all pay off. I want to go in there knowing I worked as hard as I possibly could.

Since the New York Summer Open is about month away, I’ve started to do a lot of visualization. Some of it is intentional and sometimes it happens while I’m trying to fall asleep (which keeps me up at night). I like to think of any possible situation that could arise while I’m competing and think of a way to overcome it. Doing this helps me feel more prepared when competition day finally rolls around.

The scariest thing about competing, in my opinion, is the fear of stepping onto the mat, not knowing what to do, and freezing. That’s never happened to me and I honestly don’t think it will, but it’s still scary. So, in order to calm that fear and stay focused, I need to visualize. I would suggest it for anyone who gets nervous about competing.

Speaking of Frank, I want to give him a shout out for working so hard and motivating me to push myself. I definitely think he’ll be crushing his division this summer! 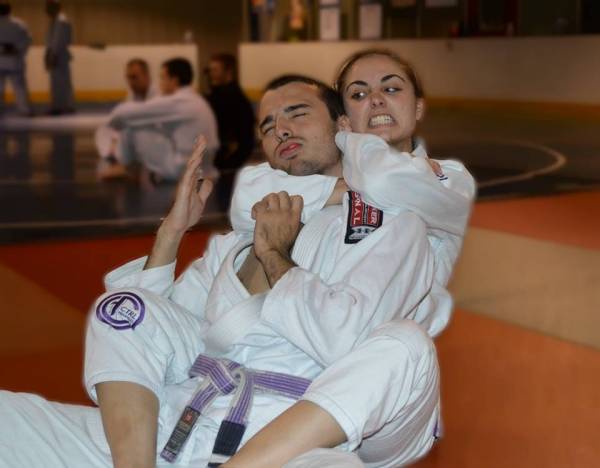 I’m really happy with how my strength and conditioning has been going. I’m excited that I’m finally back into a regular lifting regimen. I’ve definitely gained a lot of strength and stability from it. I feel more explosive and powerful when I roll, and I also feel a little safer from injuries knowing I’m strengthening areas I’ve had problems with, such as my back.

My schedule took a slight toll on my running this week, only because I attended morning training sessions. I got a sprint workout in on Sunday because I felt guilty about what I ate on Saturday (don’t we all). I enjoyed going to my old high school track, but those sprints busted my calf muscles up for the rest of the week! Hopefully that won’t happen again if I decide to do another sprint workout.

My training has been awesome. I think the biggest things I should worry about from now until the New York Summer Open are keeping up with cleaner eating and drinking more water. That’s the hardest part for me. I just have to keep reminding myself of how much I want to win.

No one ever said it gets easy. You just have to adapt to a life of hard work. I know everything I’m sacrificing will be worth it in the end. That’s what keeps me going! Have a great week, everyone!