With Hexoskin you can track a number of fitness statistics, all just by wearing a shirt.

When it comes to tracking health statistics, the Hexoskin seems to offer more bang for your buck than many competitors. With excellent wearability and feature-rich platforms available for both iOS and Android, Hexoskin may set the bar for personal-use telemetry.

Compared to other Bluetooth devices I’ve used, the Hexoskin provides immediate and accurate feedback. The software is also easy to understand. Once you’ve logged in, you simply click the type of workout you are going to use and begin your session. That’s it.

HxService is a free app that can be utilized to sync your workout into the HxDashboard, which you sign up for when you purchase your unit. All your information is stored in this server, providing you with comparable data for all of your workouts. Additionally, you can give access permission to coaches and friends who may want updates on your progress. This is helpful if you’re on vacation, out of town, or in a situation where you need remote coaching.

Quite possibly the best feature of this product is wearability. Hexoskin comes in the form of a tank top for both men and women. The top is meant to fit tightly in order to provide accurate tracking. That said, the shirt is quite comfortable and offered in several sizes.

A set of straps that tighten around the thoracic and abdominal areas comes with the shirt. These straps assist in keeping the electrodes in place to collect accurate data. The actual Hexoskin unit resides in a small pouch on the right side of the body. It tethers to a built-in cord that is unencumbering. The unit itself can be charged via the same cord used to sync data with your computer. It charges quickly, too.

Pertaining to data, the Hexoskin tracks:

Heart rate (HR) is one piece of data that everyone likes to see. It gives you feedback as to how quickly you are recovering between bouts, how intense your workout is, and how fatigued you are. HR can easily be tracked with cheap devices, but I believe Hexoskin tracks it more accurately.

While breathing rate generally requires sophisticated devices, Hexoskin appears to track this accurately, as well. The device tracks how often you breathe and how much expansion versus contraction there is within the chest and stomach. 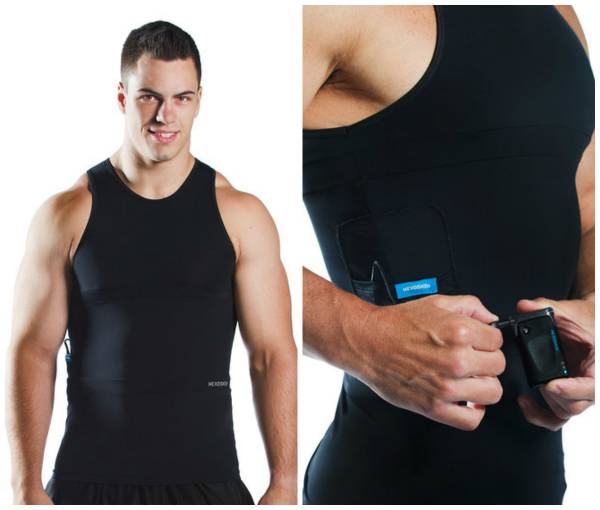 Possibly the most important factor measured for athletes, especially those looking to assess power, is g-force. This measure is taken through an accelerometer. Without professional lab testing, I can’t guarantee that you will receive the best data from any device, but for personal use this product could provide you with sufficient numbers. At the very least, it will allow you to see some level of force production, which is good when you want to increase speed and power.

I mentioned earlier that I don’t believe Hexoskin accurately tracks steps and cadence. At one point in my testing, I stayed in a stationary spot, moving my torso forward and back without taking a step. The result was an increase in steps taken every time I leaned forward.

This may be due to a malfunction of the three-point accelerometer. Changing position might cause the accelerometer to assume you’ve taken a step. This will directly affect measurement values for your steps and cadence. For many athletes this may not be a big deal, especially those in contact sports. It may be more important to distance runners, sprinters, and marathoners to track that data accurately.

Another issue is the potential for poor g-force function. With the unit being located at one spot on the body, it makes measuring forces that are multi-planar a bit of an issue given the variables of human error, specifically involving posture, performance, and efficiency. This is strictly speculation, but I think it may be something to look into in more detail. 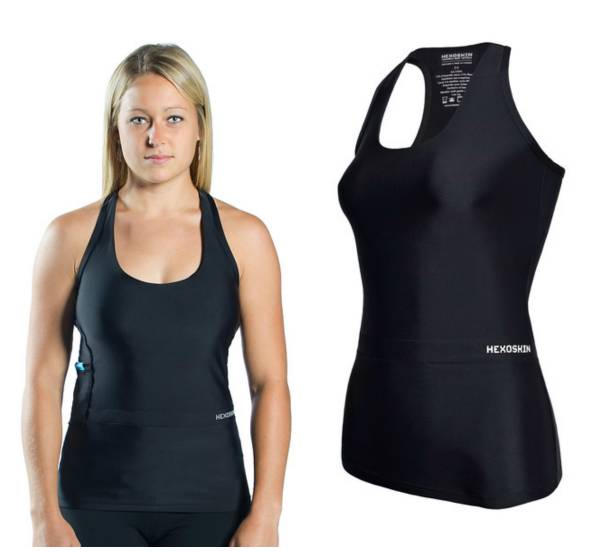 Overall, the unit is great for recreational athletes, casual runners, extreme athletes, or professional athletes looking for personal telemetry. The shirt is comfortable and sweat-wicking, and since it’s made of polyester, it doesn’t make you overheat.

This product sits at a fair price point, as well. Many similar units on the market are unable to track as much data as the Hexoskin. Accuracy does not appear to be a problem, with a few minor exceptions. Therefore, it’s my conclusion that the Hexoskin is hard to beat without spending an additional $800.

Hexoskin is available for $399.99 at Hexoskin.com.