How to Build a Better Pedal Stroke, Part 2

After two weeks I have undertaken ten training sessions, and during these I have attempted to ride more in a circle during both the effort and rest phases. Here is a detailed analysis of my results.

In my first article on how to get a better pedal stroke, I discussed my personal goal to see if altering my stroke would help me become more efficient. Research seems ambivalent as to whether a more circular pedaling style is more efficient and the results have been dependent upon the type of racing.

Using a CompuTrainer, I assessed my natural pedal stroke and reassessed it after some initial attempts at pedaling in circles. After two weeks I have undertaken ten training sessions, and during these I have attempted to ride more in a circle during both the effort and rest phases. This amounts to only ten hours, which although I suspect is insufficient to adopt a new movement pattern, might indicate some improvement.

The Test Results and What They Mean (or Don’t Mean)

This first picture is from my attempt at pedalling in circles from last time: 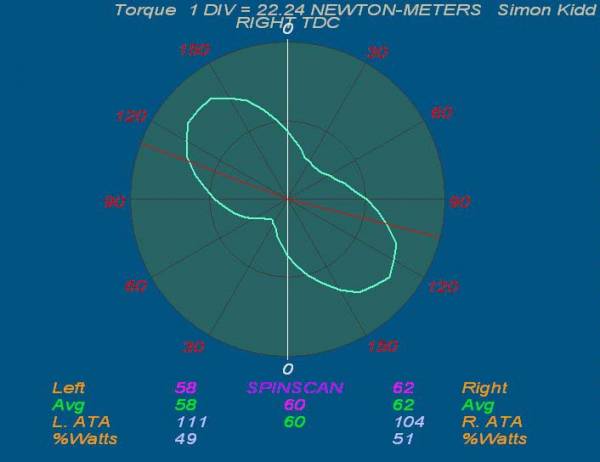 This second picture is from my test this week: 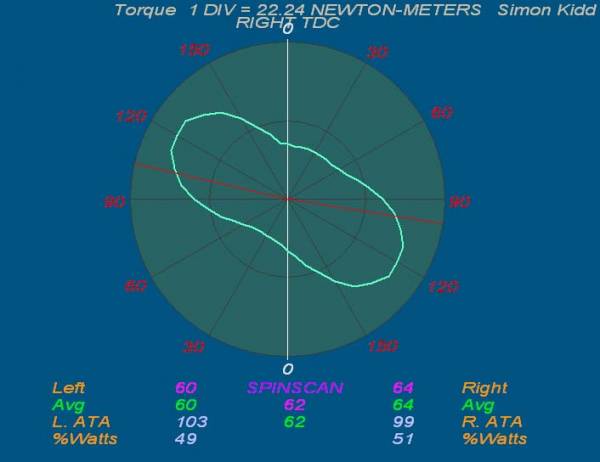 In both tests, I was aiming to maintain 200 watts at 90 rpm. My first observation is that my pedal stroke is slightly more rounded in the second picture. This change is reflected in the slightly higher numbers shown on the chart for ratio of mean to peak power – 62 this week and 60 for last time. However, my heart rate was the same both times at 148 beats per minute.

There is another number on the chart called ATA. This is the position where maximum torque is produced. Ideally, this maximum torque should be produced when the pedals are near horizontal as this is when the force from the legs and angle of the pedals are at the most advantage. It is noticeable that the angles have reduced from 111 (left leg) and 104 (right leg) last time to 103 and 99 this time. So, I appear to be pedalling with more advantage as I am producing the maximum torque nearer the horizontal pedal position. Although it is difficult on a sample of one rider and a one-day test to be conclusive, I feel this shows my pedal stroke is changing and I am producing force nearer to an ideal position.

Unfortunately, this was not reflected in a lower heart rate. But we do have to take into account that heart rate can be quite fickle, varying depending upon time of day, hydration, coffee intake, and so on. Plus, I am still producing the same average power. So one might argue that unless I became more efficient at delivering oxygen that my heart rate would not change anyway. I will be continuing and re-testing over the next few weeks to see if any changes occur on this front.

Putting aside pedal efficiency, pedal stroke analysis can provide other useful information. This picture is the same as the first picture above, but I have encircled where the picture shows deviation on trace as the left leg goes over the top. 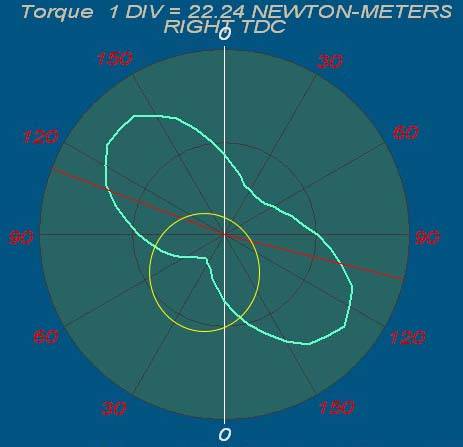 The left leg is having problems pushing the pedal over the top of the stroke. This type of information can provide useful insights into the mechanics of the rider and some direction to further investigation to assist the rider. I happen to know that my left ankle has an issue dorsiflexing (pulling up) due to an old strain injury and also a previous back injury resulting in some nerve impingement. Together these mean that my dorsiflex movement fatigues very quickly. Some further investigation reveals that when this happens the right leg has to compensate by assisting the left leg through that final movement. Clearly this is a waste of energy.

The body may also try to compensate for this lack of movement by increasing the amount of hip flexion on this side. In this situation some exercises to help maintain and improve the range of dorsiflexion would be useful. For some riders, a lack of range of hip flexion may result in a compensating movement where the knees move out at the top of the pedal stroke as the body attempts to gain a little more movement. Other traces I has seen with people that I coach included an imbalance between left and right legs with one leg being significantly weaker than the other. This imbalance contributed to uneven movement at the hips and the lumbar spine. The rider in this case stated that on some long rides they experienced lower back pain.

In my view, whether pedalling in circles results in a higher efficiency still seems to be uncertain. However, a pedal stroke analysis can provide a useful insight into the riders mechanics to look at the quality of movement and whether there are some other areas, such as joint ranges or compensating patterns, that need to be addressed.

How to Build a Better Pedal Stroke, Part 1