Weightlifting training has the characteristic feature that in a training session lasting from 1.5 to 2.5 hours the actual hands-on-the-bar time will amount to only five to twelve minutes. But in this short time a lifter may move anywhere from four to twenty metric tons and even more. This is a lot of work.

Traditionally, that work was measured in total kilos lifted. Over the years this was found to be an easy way to measure, but not an accurate one in regards to energy expended. With greater research it has been found that the energy expenditure in a given workout will depend on not one, but three different things: the bodyweight of the lifter, the skill level of the lifter, and the particular exercise performed. The latter is especially affected by amount of muscle mass involved in the particular exercise.

Effect of Skill Level and Bodyweight

This can be seen from the table below. The bodyweight categories shown are the traditional ones but the general principle remains the same, of course. In the same way, exact performance levels are not given for mid-level and elite athletes. What we see is only a simple bifurcation used to show that rising skill levels become more efficient. With more skill levels, you would undoubtedly notice a sliding scale from novice to Olympic level.

It can be readily seen that lighter lifters are more efficient than heavy ones for every skill level, while at the same time all lifters do improve their efficiency as their skill level goes up. So it may be possible that an elite lifter will use less energy in a workout even though he or she is lifting much more than a less skilled one would.

The amount of energy expenditure while performing the same work (work meaning the resistance in kilograms times distance lifted in meters) differs as well when we consider the character of the exercises. Therefore, for comparison of their energy capacity the term specific energy expenditure (SEE) is utilized – the quantity of energy needed for performing work per kilogram-meter (cal/KgM). In this way we can measure the efficiency according to input and output. In short, the amount of given output, measured in resistance-meters, in some exercises requires more energy input than it does in others.

The table below shows the sizes of SEE for a single rep performance of several weightlifting exercises. Shown here are figures gained while lifting a bar at 80% of 1RM in the given exercise and pulls performed with weights equal to 100% of the snatch and clean and jerk 1RM.

We can easily see how different exercises have different caloric requirements. We also see that elite lifters are more efficient users of their calories than mid-level lifters are. Again, this is due to improved technique.

The figures given in the table below show that the smaller the muscular mass participating in the performance of the exercise, the larger is the SEE. If the observed SEE in the various weightlifting exercises is paired to the energy expenditure for the clean and jerk (given as 100%) then, pairing them we obtain the following percentages:

In the clean and jerk, where all the muscle groups participate, SEE is the smallest and in the bench press, where we use only the muscles of the arms, it is three times larger. That is why a bench press workout is much more tiring than a clean and jerk workout. It is why Olympic lifters can train their lifts almost daily, including squats. Lifters will also immediately notice how much more taxing front squats are back squats. We all know this, but it’s kind of nice to see precise figures. And don’t forget that squats, bench presses, and rack presses all have significant eccentric components. This will use up more energy and require more recovery time. 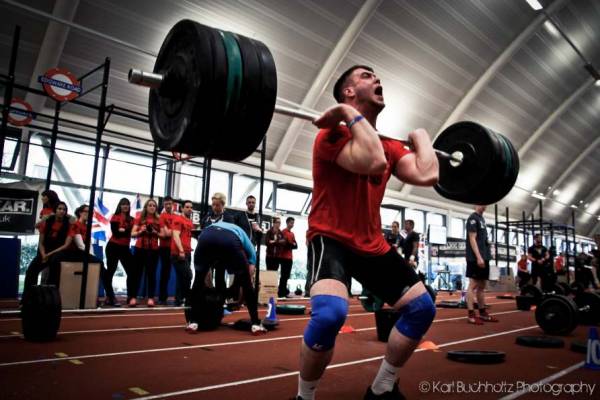 If we compare the energy expended in one lift of the bar at 80% of 1RM, it is seen that the higher the weight category, then the larger the expenditure of energy of its lifters. Depending on the type of exercise, on average a lifter expends from 9.6 kcal in the snatch people to 14 kcal in the jerk. If we take the size of the gross energy expenditure, then the exercises will lie in the order as shown in the table below. 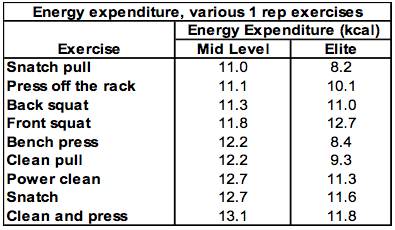 The SEE of an exercise performed as a single is 35% higher than those made during multiple rep performances. This is because you can become very efficient with repetitions, taking advantage of the stretch reflex or eccentric movement at the start of the lift.

In one training session, the energy expenditure of an elite lifter can reach 1,500 or more kilocalories, while that of a mid-level lifter is 1,200 kcal or more. On the surface it would indicate that the elite performers are not working that much more than mediocre lifters – but you now know that this does not tell the whole story. Upon closer analysis this is explained by the fact that despite their improved technical efficiency, the training load of a qualified lifter, as measured in both number of lifts and average intensity, is so much larger.

So from this we can see that the amount of energy expended by weightlifters will depend on a number of factors beside just volume of training as expressed in simple tonnage (number of lifts next average).