Timing is an interesting thing. Al Pacino has a great speech in Any Given Sunday where he notes that, “The margin for error is so small … one half second too slow or too early and you don’t catch it.”

Lifting is exactly like that – tiny, almost imperceptible margins of error. Inches of movement not done right leading to catastrophic injuries as big loads come crashing down. Consider the impassive faces of top powerlifters as they set up for their squat. Laser focused on maintaining their arch and their form, fully aware that even a minute change in form will lead to 800lbs crushing them underneath it. Or consider how back injuries occur. One of the most common causes is not that muscles aren’t working correctly, but rather that they are merely delayed in coming on at the right time. A half a second too late and the next thing you know you’ve got a disc injury.

The quest for perfect form should be a life-long pursuit in every aspect of our lives. Consider the Japanese tea ceremony, or the work of a master calligrapher to create the perfect brush stroke and capture the true essence of the word. Each exercise we do is as deserving of our full attention and efforts to perfect it.

But what if some tasks are simply beyond you? I have to be honest and say that I think my days of barbell work are just about over. I’ve read many guys in my age bracket say it before I got here. They said that sooner or later barbell quick lifts just stop making you feel good, and deadlifts and kettlebells are a better way to achieve the same effect. It’s only been in the last year that I’ve started to feel the exact same way.

Maybe you have bad wrists from breaking them numerous times. Maybe, like me, you’ve got a lower body injury that has permanently changed your ability to train off the floor. Maybe you’ve got some shoulder stuff going on and locking your hands in place on a bar upsets them. Whatever the case may be, there are ways to use kettlebells to get the same effect as you’d get from a bar, without many of the potential injury flare-ups you’d normally have.

The double kettlebell clean is a perfect place to start the journey into using kettlebells to replace the bar. One thing I will say is to make sure you can actually perform single cleans well. If you haven’t already, please go back and read this article on how to do the perfect kettlebell clean and get some reps in.

The kettlebell clean is honestly far harder to do well than the snatch, even though we tend to teach the snatch last. The reason for this is that people are often inclined to try to yank the bell into place with the clean, whereas they can’t do this with the snatch. (Incidentally, this is one of my problems with the American swing as people will have a weak hinge and extension pattern and then rely on yanking the bell into place rather than drive it into place through the force of hip extension.)

Let’s start at the beginning – the clean is a swing. I suggest you learn how to clean with a bell much lighter than you use for swings, or in this case double swings. The thing I always try to imagine is that I am still doing swings. The only difference is that I want to direct the bell somewhere else. My arms are quite loose with only enough tension to get the job done, rather than stiff and wooden. (This is actually quite similar to the barbell clean where you want arms loose and whippy, but the body locked tight and braced). Using a lighter bell will allow you to put all your focus on the swing and redirection portion of the lift rather than on just getting the bell into place.

One of the best things about the double clean is that it is an enormous upper arm builder. The elbow flexors are forced to quickly decelerate the bells on the drop – as anyone who has done repetitive snatches or cleans will tell you after they experience DOMS in the biceps the day after. Along with the upper arms, the upper back – the rhomboids and traps, in particular – is forced to work overtime to stabilize and hold everything in place. Add in a double dose of weight for the swing and hip hinge portion of the lift and we’ve got a very effective lift that won’t aggravate wrists, shoulders, or lower body issues. 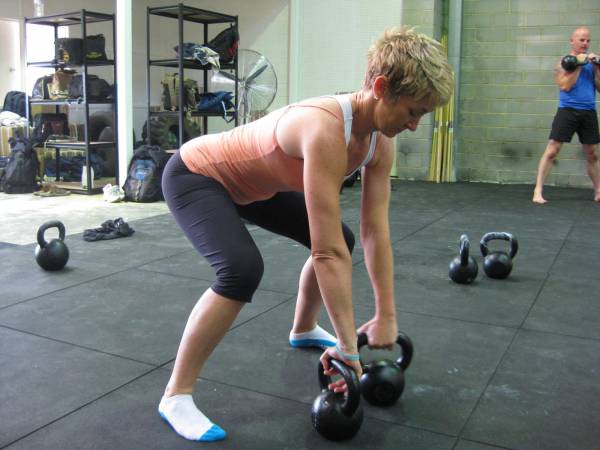 The start position is set up so that your thumbs turn back. You can even place the bells in a V-shape so that you can begin the lift already in this position. Keep the shoulders sucked in, even when in this internally rotated position. But the action on the upswing will be to go into external rotation. Here’s what Kelly Starrett has to say about creating torque at the shoulder, “… keep your elbows in … elbow pits forward … When you add rotation, it takes up all the capsular slack within the socket, making the joint very tight and stable.”

As you see in the video I make a point about keeping my elbows in. This is a major difference between the kettlebell clean and barbell clean. Imagine trying to hold a towel between your upper arms and your ribcage – really keep them glued in. This will help keep the shoulders packed down and keep the back braced, as well as keep the shoulders stable and protected.

The magic of the clean happens at about the point where the bells pass your waist. You really have a choice with kettlebells – you can decide when the bell ends up on the back of your forearm or you can let the bell decide when it comes crashing around and smashes into you. As the bell clears your waist push your hands through the handles. If you’ve remembered to swing the bells as if you were swinging, just guiding them somewhere different with your arms, this will be easy. 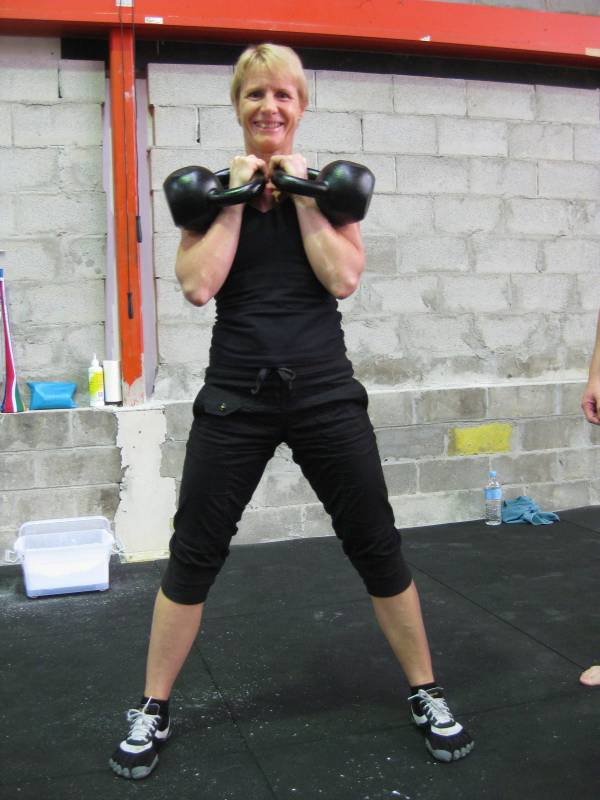 The final part is the rack position. For men, you’ll be able to get your hands reasonably close together, almost touching, while still keeping your braced plank position with shoulders packed down and back. For women you’ll need to go a little wider – the Russians have long believed that resting kettlebells on the breasts is unhealthy. So keep the bells just to the sides but still within the line made by shoulders.

One final point on holding the rack position: the checklist for a solid, braced position – whether the rack or a plank – is the same. The starting point is tensed glutes, as if trying to hold a credit card there. Then tightening the abs to further brace. And finally breathing behind the shield – only using short breaths as needed and keeping the tension in the glutes and abs throughout.

Next time we’ll look at the double kettlebell high pull – one of my favorites yet one that often makes people feel uncoordinated.