How to Increase Power Output With Better Programming

Finding the sweet spot between force output and velocity will result in a great potential for muscle gain and performance.

The ability to exert peak power outputs is a balance between high amounts of force output and velocity. Finding the sweet spot between those inversely related variables will result in a great potential for muscle gain and performance.

“Many athletic endeavors rely heavily on the force-velocity relationship, i.e. power production, which is the product of maximal force over a given amount of time.”

The specificity of this type of training has a profound effect on:

Many athletic endeavors rely heavily on the force-velocity relationship, i.e. power production, which is the product of maximal force over a given amount of time. The more force someone can apply at the highest velocity, the better his or her peak power outputs. And that is a key performance indicator in formal athletics that involve short intense bouts of activity, like martial arts, military training, powerlifting, and Olympic weightlifting. 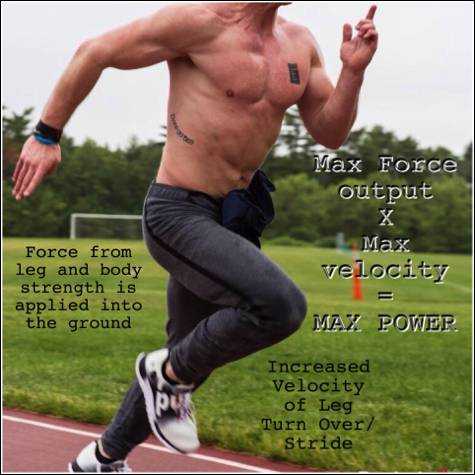 The easiest way to explain the above formula is to envision a running back, a defensive lineman, and a linebacker. Let’s assume a running back is traveling at the same speed (12mph) and direction in both scenarios.

Both collisions were powerful, yet the linebacker was a more efficient power producer with a better ratio of force output and velocity for his given positional responsibilities. Therefore, most athletic teams train for peak power with the realization that a stronger, faster, and more powerful athlete will have enhanced opportunities for success

When real-life chaos is bearing down on the select few who protect and serve our country, rights, and way of life, peak power is critical to performing those responsibilities and saving lives. Hand-to-hand combat, jumping, sprinting out of harm’s way, running stairs with 100+lbs of gear on to save you from a burning building, and running down a junkie after an attempted arrest are just a few scenarios in which fast-twitch muscle fibers are predominantly recruited.

The ability to be forceful and to exert that force at high velocities will help save lives.

Research suggests that between the ages of fifty to seventy, there is an average loss of 30% muscle and strength. Furthermore, the degree of fast-twitch muscle loss is far greater than slower twitch fibers. The loss of the ability to move quickly with stability and confidence results in falls, broken bones, and hospitalization – the trifecta for pneumonia and fatal health complications over time.

Am I saying to throw your grandmother on a weightlifting platform? No, but I do feel that basic central nervous system and explosive training principles can and should be adapted to aging populations to improve quality of life.

Research has suggested that the optimal loading percentage for upper-body peak power training is about 42% of your bench press max. When you are able to increase power outputs on sub-max loads, the athletic payoff in contact sports, plyometric exercises, and even increasing your bench press strength is positively affected.

Additionally, peak power outputs for lower body training have been shown to be about 10-20% of your squat RM. Westside Barbell’s Louie Simmons has found 40-60% of 1RMs to be effective when using dynamic barbell training, with more advanced athletes actually having greater power outputs using lighter loads (increased firing synchronization and rate). The takeaway here is that performing loaded barbell or dumbbell jump squats can improve your ability to sprint faster, run harder, jump higher, squat heavier, and produce more power.

This is a stand-alone plan. I highly recommend you adhere to its intensities and systematic approach to achieve maximal results, and that you minimize any other additional strength and power programming.

“Over time your loads should increase and your bar speeds should remain constant.”

If you are not able to fully commit to this program due to other programming requirements (from your coaches or if you’re currently in the middle of a program), then I recommend you experiment with inserting one day per week into your current program. For example, pick day one to do during the first week of the month, day three the second week of the month, and day two in the third week of the month, leaving the fourth week free to recuperate from the intense monthly training cycle.

If you are in between programs or eager to start, and your goals are similar to the outcomes of this program, then I recommend you do all three days as your sole strength-training program.

More Details on the Plan

How to Progress the Plan

In the beginning your body will need to learn to move at optimal speeds. Once you have matched your previous bar speed with the same loads on two different sessions, increase the load by 2-5% and develop optimal speed at that load. Over time your loads should increase and your bar speeds should remain constant.