With less than a week till the Boston Marathon, there’s bound to be a lot of nervous runners out there. If you happen to be one of them (or if you suffer from pre-race anxiety in general), then keep reading.

What Is Pre-Race Anxiety?

Pre-race anxiety is certainly not uncommon, but the degree to which it influences a runner’s thoughts and performance vary from person to person. Some runners can channel their nervous energy in a positive direction and use it to their advantage, while others allow it to cause a considerable amount of undue stress.

This year, at the Boston Marathon, runners are going to have to contend with not only the usual feelings of anxiety, but also anxiety generated from the threat of another terrorist attack. As much as we would all like to think that such a threat doesn’t exist, the possibility will nonetheless cast doubts and fear in the minds of many.

What runners need to understand is that anxiety, or stress, if elevated to greater-than-normal levels, can result in a variety of negative reactions, some of which include: impaired judgment, feelings of being overwhelmed, and a consequent decline in confidence, as well as physical symptoms such as nausea and dizziness, tight muscles, and aches and pains.

Since the onset of pre-race anxiety tends to start a day or two before races, it’s important that runners try to develop some type of de-stress routine. This is not easy, but it’s worth attempting.

Even the Professionals Experience Anxiety

I’ve experienced enough bouts of severe anxiety that learning how to control my nerves is now a priority. In past races where my nerves have gotten the better of me, I’ve struggled to control my breathing and have even experienced uncontrollable shaking.

Elite runners are not exempt from experiencing pre-race anxiety either. In fact, it’s likely that they’re more prone to it. In a recent interview I had the opportunity to participate in, I was able to talk briefly with semi-retired professional runner, Hal Higdon, and hear his take on nervous runners:

Being a competitive runner, I’ve never gone to a starting line without being extremely nervous about it, worried about my ability to perform. I remember standing on the starting line at the World Masters Championships in Toronto in 1975, seconds before the gun was going off, and I was sure I was not going to be able to move … I had this vision that the gun would go off and there would be ten or fifteen other runners taking off and I would be standing there paralyzed.

Hal went on to say that nervousness is “frankly” quite normal among competitive runners, and while this year’s Boston Marathon will be a little more worrisome for some, he encouraged nervous runners to take advantage of the large crowd support. 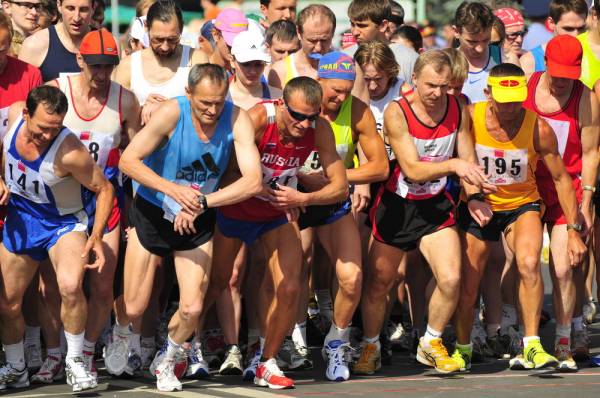 How to De-Stress Before the Race

In addition to finding comfort in numbers, here are a few other tips to help you control your nerves:

Practice deep breathing: Deep breathing, if done right, can help to calm the body and relax the mind. Sama vritti (or equal breathing) is a yoga breathing technique for beginners, and can be used at any time and in any place. The idea is to get yourself in a comfortable position, close your eyes, then nose-breathe in and out for a count of four on the inhale, and an equal count of four on the exhale.
Try using essential oils: This idea was suggested recently by a friend who uses essential oils to help manage her own anxiety and that of her children. I contacted an essential oils specialist to ask for a recommendation (specifically relevant to the type of anxiety that runners experience before a race), and she suggested “Blend of Melissa.” Melissa is beneficial, she said, for “calming circulation, strengthening and slowing the heart, lowering blood pressure, and easing palpitations due to unusual stimulation, fear, or excitement.” You apply it on the wrists, forehead, and feet.
Set more than one goal: You’ve probably seen this suggestion more than once on various running websites. Many running coaches tell their clients to set at least three goals: a good goal, a great goal, and an optimal goal. Setting three goals may help to put a runner’s mind at ease, knowing that at least one of the goals will likely be achieved. Alternatively, you could set no goals. If you have no goals or expectations, it may help to eliminate the stress of having to perform.
Write up a checklist: Writing out a race plan that includes a gear list, as well as fueling and pacing strategies, can help minimize stress. Stress generally surfaces when circumstances seem beyond your control, so the idea of having everything planned out in advance (and recorded) is thought to generate feelings of being in control and thereby increase confidence.
Remember that stress can be a good thing: Normal levels of stress help to ready the body for action by releasing adrenaline and endorphins that aid physical performance. “Good” stress stimulates us, helps us to focus, and ultimately helps us to replace fear with confidence.

A final tip: one coach I know likes to remind his runners that races are just like “days at the office.” There is nothing to fear if you remember that you’ll simply be doing what you typically do on an almost-daily basis.

Have you experienced pre-race anxiety? What helps you relieve the stress? Post your thoughts and experiences to the comments below.