How to Scale CrossFit WODs for Measurable Improvements

Structuring the benchmark Girls as time-constrained tests provides a method to help your athletes mature into accomplished CrossFitters.

If you have double unders, “Annie” is hard, fast fun requiring seven minutes or less to complete. But if you’re just learning double unders, this good-time girl can turn into a real bitch, as my man Mike discovered.

When Mike saw “Annie” on the whiteboard, he was jazzed. This would be the first WOD he’d be able to perform as prescribed. But twenty minutes later he was only halfway through his set of thirty double unders. By this point he was screaming and cursing on every missed rep. It was both excruciating and hilarious to watch, and I’m pretty sure there’s still a black cloud of obscenities hanging over PVCF’s first location.

“Annie” took Mike almost 28 minutes. (This was 2008, “Death before DNF!” was the rallying cry for many CrossFitters, and mea culpa.) I knew something wasn’t right about that. He’d completed all the work, sure, but the benchmark “Girls” workouts were supposed to be intense. Half an hour of flailing may have been grueling, but it was hardly intense.

A guy like Mike took 150 double unders and sit ups on the whiteboard as a personal challenge, I realized. There was no way he was going to quit until he was done. But what if instead of a challenge, he was presented with a test? One with a time limit?

Ten minutes seemed a reasonable cut-off. Based on that limit, I figured a logical way to schedule double under and sit up couplets of 50, 40, 30, 20, and 10 reps. Next time I programmed “Annie,” it looked like this:

At 10:00, two experienced athletes, who had stayed ahead of the clock, had legit “Annie” times: 5:42 and 6:05. The rest, having recorded their efforts each round, had data: total double unders and total sit ups. When “Annie” came around again, they could compare their new score against that days to see if they’d improved.

As time passed, this new approach helped me out with another problem. My athletes, it seemed, were growing obsessed with doing the “Girls” as prescribed. It didn’t matter to them if they were slow or if their form degraded. They weren’t swayed by my appeals to math and physics. “Decreased time,” I’d tell them. “Increased power!” They didn’t care. As long as they were using the weight written on the board, they were happy.

I went looking for validation of my position. In Greg Glassman’s original article on the benchmarks, he said “Fran,” “Elizabeth,” and “Diane” should each take about four minutes. On the other hand, he went on, there was nothing wrong with taking a full hour to complete one of these workouts, if that was required. I found that confusing. Were we supposed to be chasing intensity or what?

As far as I could see, going heavy often meant a “Diane” that took twenty minutes, as an athlete ground out doubles and then singles at 90% of deadlift 1RM. That would be fine in a strength training session, but against the clock? As Col. Kurtz once murmured, “The horror. The horror.” 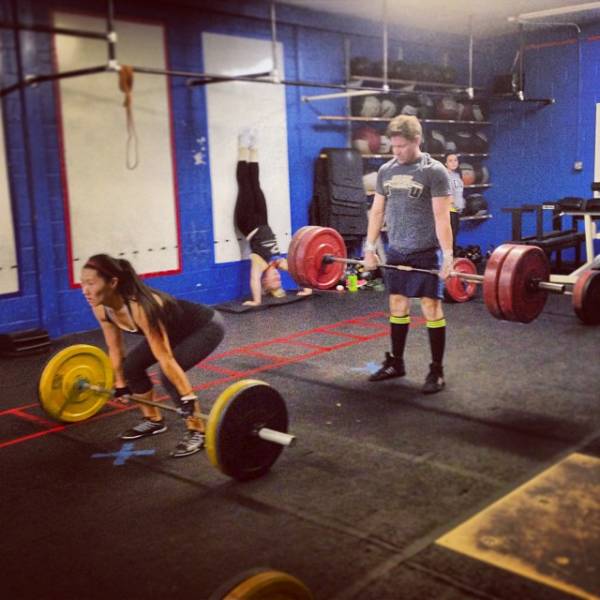 The more I thought about it, the more I grew certain that the Girls weren’t for practicing. If these workouts were actually to be used as benchmarks, then they should be treated as a measure of current capacity, not as training. Once I started structuring the Girls as tests, rather than simply timed, slapdash workouts, my athletes slowly came around to my way of thinking. We prioritized movement quality, time domain, volume, and load, in that order.

As an example, here’s how we program “Fran.” “Fran” tests your ability to crank out 45 barbell thrusters and 45 pull ups in a certain amount of time. For the developing CrossFitter, the appropriate load and movement choice is whatever allows them a fair shot at accomplishing that goal. Greg said the time domain should be about four minutes. After experimenting with that, we’ve found that for our general population a six-minute version is a lot more doable.

The first time a new trainee is exposed to “Testing Fran,” we hand them an empty barbell. If you have a more experienced athlete who has never done “Fran,” but who’s obviously strong enough to use more than an empty barbell, have her establish a thruster training max and then use 50% of that weight. Time constraints still apply.

“Just the bar?” they complain. “Trust us,” we tell them. And indeed, six minutes later, they are hurting. Not to the extent the experienced athlete who went as prescribed is hurting, but at a level appropriate for someone new to training. 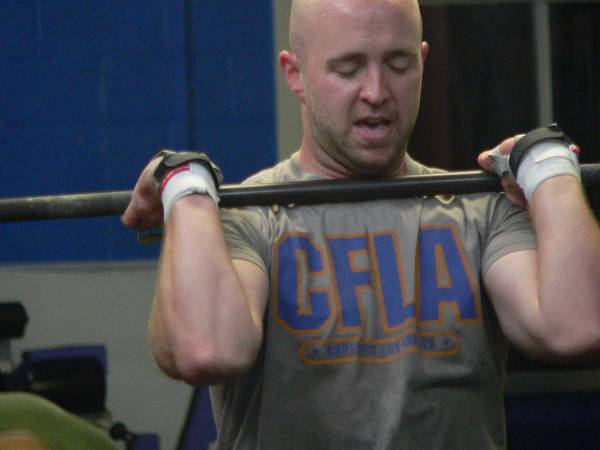 If our new athlete beats “Testing Fran” by getting, say, all 21-15-9 thrusters and ring rows, then the next time “Fran” comes up, he can put ten pounds more on the bar and use a more challenging pull up sub. Eventually he’ll work his way up to using prescribed movements and loads – when he’s actually ready to handle them. If he didn’t get all 45 reps of each, then he’ll repeat at the same level of challenge until he successfully completes the WOD in six minutes.

Structuring the benchmark Girls as time-constrained tests provides a method to help your athletes slowly, but surely mature into accomplished CrossFitters. It works for all of the Girls. Simply determine a desirable time domain for the WOD, break it down in a logical manner, and then challenge your athletes to complete the prescribed volume under those constraints.

People tend to forget that ten years ago these WODs were considered beyond the pale. Though these days they are sometimes performed back-to-back-to-back by CrossFit Games athletes, being able to perform the Girls as written is a considerable athletic achievement for the average CrossFitter. And for most people, it’s at least a two-year endeavor. And that’s okay! There’s no rush.

Teach your athletes to approach the Girls with respect, to move with integrity, and improve incrementally. When they finally jot “as Rx’d” next to their times, they’ll have truly earned it.