Hey guys, can we chat? And by “guys,” I mean the boys, girls, men, and women of the CrossFit community. Did you guys see the workout video from “Diemond Dave’s Judy Chompin’ Weightliftin’ Dojo” on YouTube? You know, this one:

Hey guys, can we chat? And by “guys,” I mean the boys, girls, men, and women of the CrossFit community. Did you guys see the workout video from “Diemond Dave’s Judy Chompin’ Weightliftin’ Dojo” on YouTube? You know, this one:

Those snatches are pretty bad, huh? Probably not something you’d want to see from yourself, your athletes, or your clients. These are bad not only from a performance and efficiency standpoint, but also are a needless injury risk. I think we can all agree on that. Now, we (the CrossFit community) are not expecting all of the folks in your gym to look like James Tatum or Ariel Stephens, but we definitely won’t allow a continual display of hideous, mutant starfish sexual maneuvers. We all see weightlifting movement like that from time to time, and when it happens, I think we would all agree the athlete needs to reduce the load and work on building a better foundational movement. I’m not asking for mastery, just a true understanding of what’s going on in the movement and the means to execute it in a more technically competent fashion.

Beyond a solid understanding of the basics, most of us, as well as our clients, spend a significant amount of our training time and energy in pursuit of weightlifting skill and the related movement strength pieces. I’m also venturing a guess that we’d all agree that gaining strength and proficiency in weightlifting movements does a ton to improve our CrossFit performance. So why is it that the concerns in regards to range of motion, technique, skill, and foundational strength in the weightlifting movements tend to be so easily brushed aside when dealing with the gymnastic components of CrossFit?

Maybe it’s because high-level CrossFit is all about moving weights? Wait, 50% of the events at the 2013 CrossFit Games had some type of gymnastic element. Or how about this gold nugget from Jacob Tyspkin of CrossFit Monterey and the Monterey Bay Barbell Club: “Gymnastics is of particular importance for females. In the 2012 CrossFit Games, six of the top ten girls, and all of the top three, had a gymnastics background.”1

Then maybe it’s because we’re not concerned with gymnastics at the highest levels of our sport and instead we’re just concerned about the basics. So what about this part from Greg Glassman’s famous World-Class Fitness in 100 Words, “Similarly, master the basics of gymnastics: pull-ups, dips, rope climb, push-ups, sit-ups, presses to handstand, pirouettes, flips, splits, and holds.” Hmm, that’s 50% of the movements listed in that hundred-word gem.

Well then surely it’s because most of us live in the “middle” of CrossFit land, the classics, “The Girls.” Darn, wrong again. 76% of standard CrossFit benchmark Girls contain gymnastic movement. So, if gymnastic movement is foundational to our pursuit of world-class fitness, is present in an overwhelming majority of our benchmark workouts, and is a huge commonality in being genuinely good at The Sport of Fitness, then why are we okay with our community standards for gymnastic technique and range of motion being so far from what we demand in barbell driven movement?

Yes, I’m talking to you. You with the three-AbMat-scaled, snatch-width grip hand placement, palms rotated to 90 degrees, butchered and disjointed kipping handstand push up. It would never be acceptable to say that cutting half of the range of motion for a strict press or push press would be okay, but it’s done with boring regularity in our community when we look at gymnastic movements. Do we really need to look to the double-green-band, half-range-of-motion, pseudo-kipping ring dip? How about the massive-spinal-overextension, legs-splayed-wildly, lower-body-dominant kip that bombs forces much greater than bodyweight onto an inactive shoulder girdle? 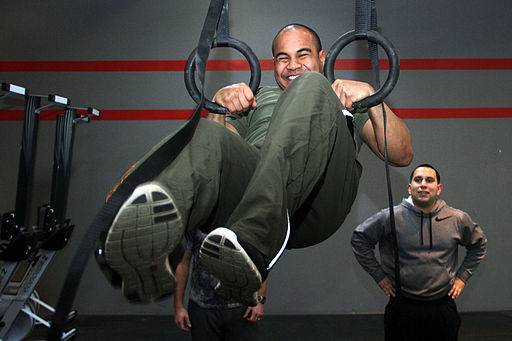 I think part of this stems from an ignorance about prerequisite strength and protecting our bodies. I think that’s a piece of the puzzle, but honestly I believe that for the most part we as a community know better, but choose to ignore it. We scale load, but not range of motion and technique requirements in our weightlifting pieces. But we don’t do the same with gymnastics because we’re lazy and impatient.

Creating good scaling and progressions for gymnastic movements that replicates proper movement patterns and sought-after technique takes creativity, knowledge, and skill. However, I believe the bigger factor is that many people are not prepared to accept just how much more consistency, patience, and dedication it takes to earn and own your gymnastic movement. People don’t want to go the long, hard road of graduating through progressive variations of movements, and to systematically expose themselves to greater demands of skill and strength over months or even years. They want to check that little Rx box without evaluating a long-term risk and reward relationship.

For most people, spending a couple months figuring out double unders is about the longest they have ever spent developing a movement in their life. Trying to get people to dedicate many times that amount of time and effort on developing strict, full range of motion, technically-correct gymnastic movement is one hell of a hard sell. Keep in mind I’m not talking about gymnastic wizardry, simply a strict pull up, ring dip, and handstand push up as a start, while also reaching for a strict muscle up as a gymnastic priority. And if you start looking toward intermediate and advanced gymnastic movements, then you need to start coming to terms with spending multiple years in pursuit of movements and holds. 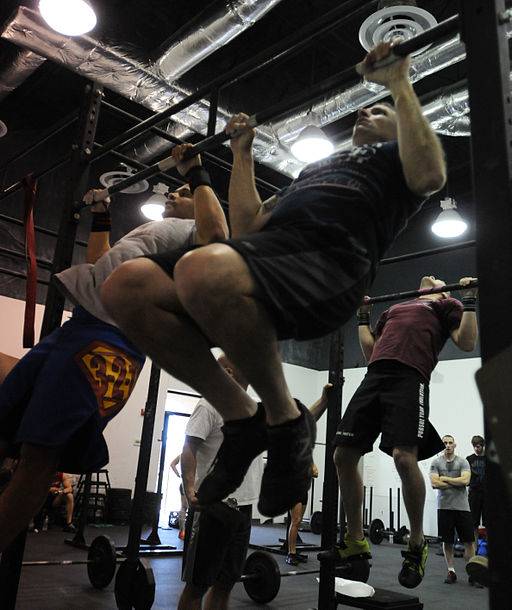 This isn’t just a call to beginning and intermediate CrossFitters. When you look to the number of DNFs in the “Legless” event at the 2013 Games, it obvious we need to set a higher priority for gymnastic skill and strength bias in the community at all levels. Will it take time and dedication? Absolutely. But here’s the thing, we’ve all got the time. I don’t know about you guys, but I don’t plan on arbitrarily stopping CrossFit in a year or two. Most of us are hooked for life. Aside from that, there is literally no downside to these pursuits. Becoming stronger, better, and more efficient at foundational gymnastic movements doesn’t reduce your ability anywhere else. It will improve your strength, control, coordination, spatial awareness, movement quality, sequencing, and mobility with no tradeoff – aside from taking the time and effort, and holding yourself to a higher standard.

Be better at the basics. Be virtuous.

Charles “Chuck” Bennington has been intimately involved in the CrossFit community since his CrossFit Level 1 Certification in 2009. His interaction is not with just his local area, but the international CrossFit community at large. He has been coaching multiple levels of CrossFit clients on a daily basis for the past four years and spent three years as the Director of Operations at GSX CrossFit in Fort Worth, Texas.

Beyond typical CrossFit coaching, Chuck has been working for several years working with a team of some of the best individuals in the community to plan, coordinate, and execute various competitions to test athlete fitness levels, both in the individual and team settings. The events he has been a part of bringing to life in the last several years include 2010 CrossFit South Central Regional, 2011 Reebok Global Marketing Meeting, 2011 Life AsRx Tour, 2012 Life AsRx Signature Series, 2013 Xtreme Top Box Throwdown, and currently the Monster Series.

Chuck currently resides in Sarasota, Florida where he and his wife own and operate Seaward CrossFit. Aside from traveling as a lead coach with CrossFit Gymnastics and coaching at his home gym, he also works on a one-on-one and remote-coaching basis to assist individuals competing in weightlifting, powerlifting, and CrossFit with programming and nutrition guidance.