The mind is every bit as powerful as the body when it comes to accomplishing physical tasks. While it isn’t your brain that runs the distance or climbs the mountain, it does fire off directions to those parts of the body that accomplish those tasks. The importance of the mind in achieving great feats cannot be overstated.

Just as the body has to obey the laws of nature and physical properties, the mind has to obey laws of its own. While there are many mental strategies for peak performance, one in particular seems to be the most important, and that is the law of visualization and imagination. The mind must first be able to visualize, picture, or otherwise imagine what it wants the body to accomplish, before the body can set out to accomplish a task.

This is where the concept of imagination comes into play. At first glance, one may think that imagination is something for children or artists, but this could not be further from the truth. The mind’s ability to imagine with depth and detail is just as central to the physical task at hand as the body’s preparedness.

Visualization: The Power to Create Experiences

When talking about the mind’s ability to imagine, create, and envision, it is necessary to understand the exact process. It is not enough to simply think to yourself, “I can do this.” Nor will imagining success guarantee that you will get there. Instead, one needs to invoke the powers of mental imagery. According to author and Ironman triathlete Ralph Teller:

“Mental imagery, also called visualization and mental rehearsal, is the process by which we create or recreate experiences in the mind using information stored in our memory. This structured imagery is aided by a vivid imagination. The more control we have over our imagination, the more we are able to control our performance”

The key phrase here is “create or recreate experiences.” Simply put, you need to trick your mind into believing that you have already gone through with the task and accomplished it. For extreme physical challenges, this means not just idly thinking about the task at hand, but creating the experience piece by piece, down to the most minute detail.

For example, before my third Labor, in which I climbed a 20ft rope until I reached the height of Mt. Everest (29,030ft) for Parkinson’s Disease awareness, I spend weeks inside my own head creating the experience of what it would be like to climb up Mt. Everest. I did not simply sit down and repeatedly think “I am going to climb the height of Mt. Everest”. I actually tricked my mind into believing that I had already done so.

I mentally prepared as if I was actually going to make the literal climb up the steep, rocky face of the world’s highest mountain. This meant imagining every arm-reach up to the next stony handhold. This meant imagining the intense cold of the environment, combined with the intense heat of my body as it exerted every last ounce of energy it had. This meant feeling the splintering rope underneath my hands as I pulled my body weight up with my arms and legs. By the end of my multi-week imagination process, I could actually feel the calluses on my hands, despite not yet having made the actual climb. I could feel the mental exhaustion, coupled with the triumph that one feels after reaching the peak. In essence, my mind fully believed that I had made the climb to the top of Everest even before I attempted and succeeded at the rope climb challenge. 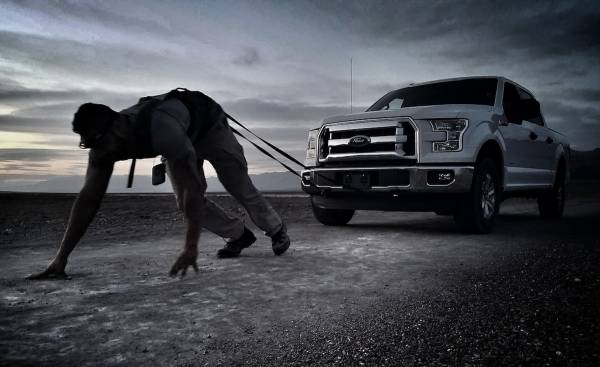 On May 22nd, 2016, the author pulled a 2.2+ ton truck for 22 miles across Death Valley in the Mojave Desert. He did it to raise funds and awareness for veteran suicides.

I knew in my heart and in my mind that the rope climb could be accomplished because my mind thought it had already done so. It is hard to describe how intensely one needs to imagine in order to accomplish this feat, but it is possible, and it is one of the greatest resources for accomplishing any task in one’s life, no matter how big or how small.

Imagination and the Flow State

Part of the reason why mental preparation and intense visualization are so crucial to achieving peak performance is because of the concept known as “flow.” Flow, sometimes referred to as “being in the zone,” is something that many people experience, whether during a physical challenge or something that is of extreme interest or importance. Researchers have attempted to outline the effects of flow:

“Among the various characteristics attributed to being in this state are a fusion of body and mind, a heightened sense of skill mastery, deep concentration, emotional buoyancy, increased self-confidence, a focus on the present, low self-consciousness, perceptions of effortlessness, feelings of relaxation, self-transcendence, and automaticity of performance.”

Despite its instinctual nature, it is often difficult to reach this mental state. The flow state is a requirement when setting one’s goals to the highest level, and because it is a fusion of mind and body, the mind is just as important as the body, and vice versa. You could be the most physically fit person in the world, but if you lack self-confidence and imagination, you will fail where an athlete of lesser physical stature will succeed with ease.

Conditioning your mind will necessarily require a much different approach than the body, but you will only reach your potential if you are pushing both to their absolute limits. For the mind, this means painting a detailed mental portrait of what you want to accomplish. You must practice this skill until you have the ability to mentally experience your goal before your feet leave the ground.

During Michael McCastle's 11 years of military service as an air traffic controller, he was deployed around the world. His passion for fitness and peak human performance eventually led him to work as an assistant fitness leader and mental conditioning coach for Naval Special Warfare candidates and top level athletes. With over a decade of experience, he continues to help business leaders, corporate teams, entrepreneurs, and athletes at all levels achieve peak performance in sport, business, and life.

Michael has set 4 separate world records, and is a mental strength coach, certified personal trainer, public speaker, and founder of the Twelve Labors Project. Through this initiative, he uses feats of incredible endurance to heighten awareness and raise funds for philanthropic causes, including cancer research, wounded veterans, and Parkinson's disease research. His efforts have been covered by Men's Health, USA Today, The Navy Times, and a host of other media outlets.

The increasingly difficult challenges Michael attacks are meant not only to test his own physical and mental limits, but to inspire others to live with purpose, stand for a cause greater than themselves, and relentlessly pursue their own goals.