In Over Your Head: Pro Advice for a Better Overhead Squat

What’s it good for? Why should you do it? What are the secrets that make the it better? Read on for all the answers.

The overhead squat. Delight to some. Nemesis to many. What’s it good for? Why should you do it? And what are the secrets that will make it work better? Read on for all the answers.

A Reason to Do Overhead Squats?

According to a 2014 study published in the Journal of Strength and Conditioning, the overhead squat elicited higher muscle activity in the anterior trunk musculature and other muscles than the back squat – and at lower levels of load. As coach Doug Dupont explained in his analysis of the research, “When they compared pound for pound, the overhead squat had higher EMG activity in every muscle except the gluteus maximus, and only during the concentric phase.”

So not only will the overhead squat have carryover to performing the snatch, but in and of itself it can activate your certain muscles better than any other squat. You can read Doug’s full analysis in the article, “Science Compares the Back Squat to the Overhead Squat.”

But does the overhead squat actually have carryover to the snatch? Many people cite Olympic weightlifting as a reason to train overhead squats. But veteran weightlifting coach Nick Horton says weightlifters don’t do overhead squats and he doesn’t think you should be either. In fact, in response to the question of whether or not to do them, he wrote, “Unless you are a rank beginner and are seriously lacking core strength, probably not.” 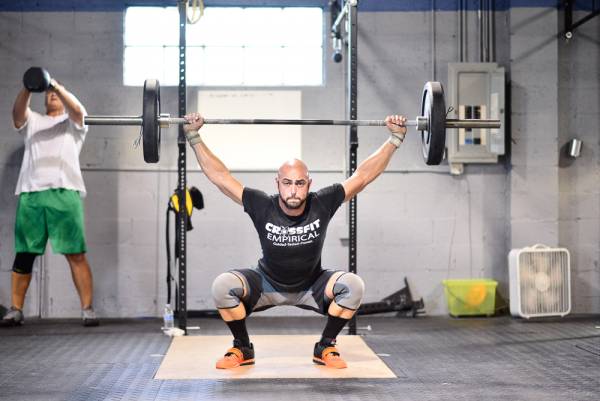 What the Experts Say About the Overhead Squat

But maybe you’re a die-hard believer in the overhead squat for weightlifting. Or maybe you’re a CrossFitter who has a definite need to practice and build your overhead squats. If so, then Patrick McCarty has done some homework for you. In his article The Overhead Squat Is a Punk: Advice From Experts on How to Make It Better, he spoke with experts to get their tips on how to get a better overhead squat.

From Tamara Reynolds, competitive weightlifter and co-founder of Weightlifting Academy, a worldwide, and co-owner of Asheville Strength in Asheville, North Carolina:

Wrists back! For some reason, I see a lot of people who have learned to overhead squat or snatch with their knuckles pointing forward. This is putting the weight of the bar on your poor little thumb joint. Get your wrists back and put your palms toward the sky like you are doing a pushup on the ceiling. If your knuckles are forward, the bar is going to want to come forward. Don’t let it!

Stretch the bar! Pull that bar apart like it’s a rubber band and you’re going to shoot your pesky little brother with it. When you pull the bar apart, it forces your elbows to lock and makes your upper back tighten up.

From Samantha Tollman, competitive weightlifter and assistant coach for USAW Level 1 certifications as well as being a technique coach for Mike Burgener in the CrossFit Weightlifting courses:

My favorite cue in the overhead squat is “ponytail.” The bar should always remain where a ponytail would be located, right over the back of your head. The bar shouldn’t move past or behind as you squat nor should it be towards the front of your face. This works for men and women. Ponytail!

…while old-school CrossFit was big on “active traps” and “shrug like crazy,” it’s actually better to not shrug your shoulders to your ears, as it will just cause some internal rotation of your elbows, which is the opposite of what you want.

Building Mobility for the Overhead Squat

If you do decide to pursue the overhead squat, then getting your shoulders both strong and mobile is key. Yoga expert Sima Tamaddon used her knowledge of anatomy, mobility, and the overhead squat to create this five-minute flow to get your body ready before a squatting session. You can just follow along!

A Challenge for You: Bodyweight x 15 Reps

Before I let you go for today, let’s get a little old school. Check out this video of CrossFit O.G. Nicole Carroll in pursuit of a set of fifteen overhead squats with her bodyweight on the bar. This was done back in 2007. That means you’ve all had a lot longer to get this strong than Nicole did. So, who among you is willing to take this challenge?