The diagnosis of Wolff-Parkinson-White syndrome left Hardy with an uncertain future, but now he’s aiming his skill-set toward coaching and helping new fighters navigate all aspects of the MMA scene.

For professional fighters, getting injured or being diagnosed with serious medical conditions can be devastating. On March 22, 2013, UFC Fighter Dan “The Outlaw” Hardy was set to fight Matt Brown at UFC 7 on Fox, but after completing the California State Athletic Commission’s required EKG testing, he was pulled from the card by the UFC. The diagnosis of Wolff-Parkinson-White syndrome has left Hardy with an uncertain future.

Medline Plus describes Wolff-Parkinson-White syndrome as “a heart condition in which there is an abnormal extra electrical pathway of the heart. The condition can lead to episodes of rapid heart rate (tachycardia).” Possible complications arising from this condition vary. According to Medline, “It may rapidly lead to shock or death, and requires emergency treatment.”

In spite of his condition, which had been asymptomatic, Dan feels better than ever. Overtraining for years took its toll on his body, and now that he is free of the constant pressure of fight camp, his health has flourished. In our recent interview, Dan said:

Physically I feel very different now. I have spent a year without the damage of fighting and training camp. My workouts now are based on physical strength and flexibility. I still integrate martial arts into my workouts, but now as an element of training instead of the dominant factor. My problem has always been pushing too much and being overtrained and exhausted. This was a combination of my own enthusiasm, wanting to impress my coaches, and being so competitive with everyone else in the gym. On the days where I should have been taking it easy or resting altogether, I never did, even when I was injured. I’d be going for a secret midnight run to quench my desire to exercise or turning a technical session into hard sparring when I’m already tired.

Over this past year in particular, now that I have no set training schedule, I’ve just been listening to my instincts a lot more. Paying attention to how my body feels and being honest, whether that means pushing a little bit more because I know I have it or taking a day to let my body recover. The piece of advice that I got recently during a meditation session is that nobody knows me better than me, so if I learn to be honest with myself I will always make the right decision when it comes to training.

Dan’s training schedule varies, depending upon what he wants to focus on. “I do about four hot yoga sessions a week, I do some kind of strength training almost every day, and I do some kind of cardiovascular conditioning a couple of times during the week.”

After a career of watching his weight, Dan has now developed healthy eating habits and doesn’t follow a particular diet structure. He eats when he’s hungry and uses his energy level as a guide. He explained:

With my diet, I tend to have a couple of smoothies a day, juice or almond milk, frozen fruit, and protein. My meals are usually salads with lots of power foods like hemp, avocado, and spinach, or stir-fried vegetables with rice or quinoa. I snack on trail mix, fruit and things like hummus and rice cakes. When I need a boost, I grab a Xenergy.

My new favorite power meal at the moment is frozen bananas, dates, and a little cinnamon. Blend it until its smooth and you will be surprised how much like ice cream it is! My girl also makes these awesome Incan bowls for breakfast when we have a big day of training. Quinoa cooked in tangerine juice with a little honey, slices strawberries, bananas, and a mixture of seeds such as flax, pumpkin, chia, and sunflower.

Spending time away from fight camp made Dan realize how out of balance his personal life was during his career. He enjoys the new opportunity he has to travel and spends more time with his friends and family. Hardy is also making the transition from fighter to trainer and muchof his time is spent mentoring up-and-coming athletes in collaboration with XYIENCE. And with 36 fights behind him, The Outlaw knows what it takes to be a professional fighter: 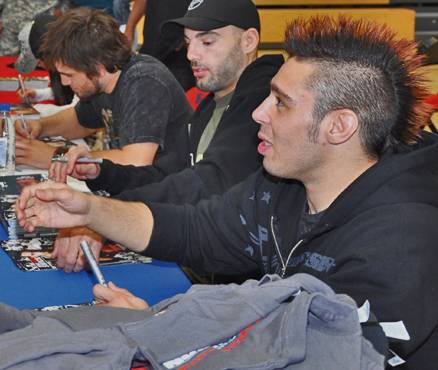 Dedication is by far the most important. It encompasses everything else because without it there would be no consistency, no forethought before making a bad decision, and no focus in the gym. My first real mentor was my Taekwondo instructor, Mick Rowley. I really began to embrace martial arts as a lifestyle when I began training with him. He introduced me to Bruce Lee, the master of dedication to the martial arts.

After so many years of hard work and dedication as a “student,” it’s really very cool to move into a mentoring role and help XYIENCE kick off its grassroots Power to Win Team. The program is aimed at up-and-coming amateur athletes, so that gives the pro-athletes like me a chance to become a teacher of sorts.

In addition to training, Dan stresses the importance of becoming adept at public relations when building a career. “It’s important for young athletes to realize the benefits of working with brands beyond the pay check,” he explained. “With XYIENCE, I’ve been able to hone my on-camera skills and have a lot of fun doing the Fit Tips and parodies like the Xy-What? video where I get to punch BMX athlete Mike Escamilla over a bet about how to pronounce the product name.”

To top it all off, Dan’s experience in managing the stress of competition is invaluable to the athletes he mentors. What’s interesting is that in addition to visualization, Hardy’s pre-fight preparation includes regulating his heartbeat. 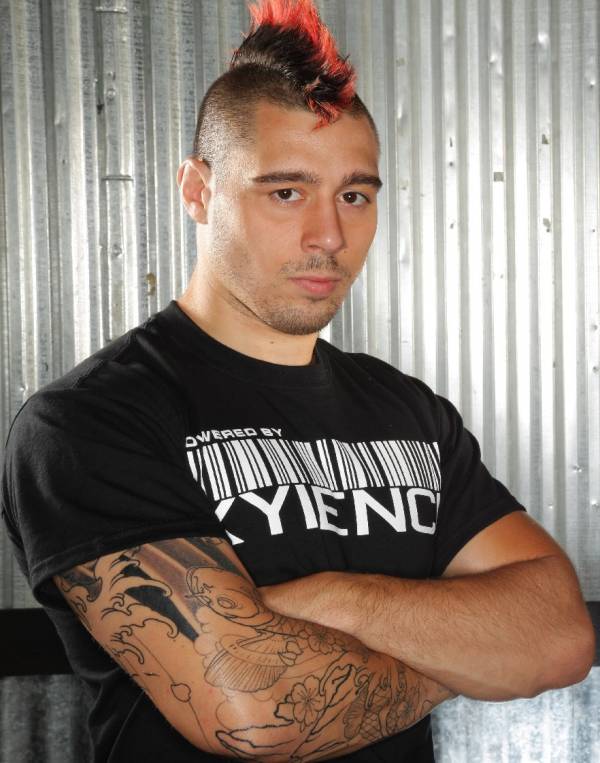 The heart rate meditation is something I learned a while ago as a way of focusing inward when my mind is erratic. I have breathing and counting methods I use also, but I always feel more connected when I focus on my heartbeat. I remember as a kid I saw a show on TV where a guy slowed his heart rate right down and I would practice before I fell asleep at night. I found it was really useful during exams at school, job interviews and before fights.

In my late teens, someone taught me some visualization techniques to meditate on being successful. I combined them for training camp meditation and then by fight time. Every time I got any anxiety I would focus on my heart rate, control my breathing to slow it down, and then visualize the fight going my way.

Dan’s success in MMA is a result of all of his hard work and dedication in all aspects of the game. He is a well-rounded athlete and an invaluable asset to anyone who is fortunate enough to train with him. To stay up to date on what’s happening with The Outlaw, follow him on Twitter and Facebook. He’s very active on social media and has some great training and diet tips.