There’s been a lot of ruckus surrounding CrossFit and rhabdo lately. But it is even about rhabdo? Or is it more about our attitude as CrossFitters?

I owe my brother, Chris, an apology. He ordered a DVD workout series called Les Mills’ Pump and posted on Facebook that he was anxious to get started. Curious, I took a look at some of the preview videos and immediately took to Facebook myself to ridicule the program. The squats were not anywhere near parallel and they were doing bicep curls. You know, all the stuff we Eleet CrossFitters eschewed a long time ago.

Naturally, all of my CrossFit “friends” chimed in on my post, helping me rain condescension all over the Beach Body family of products. Their P90Xs, their Flirty Girl Fitness, you name it. And that, friends, is why people hate CrossFit.

Rhabdo and a Case of the “Hates”

It’s been an exhausting week for defenders of the CrossFit castle, for sure. The wagons got circled in a big way after a fella by the name of Eric Robertson started the snowball rolling down the hill. He posted a piece called CrossFit’s Dirty Little Secret that discussed rhabdo and cited some anecdotal evidence for CrossFit’s responsibility for same, including its mockery of the disease itself pursuant to the Uncle Rhabdo clown.

The dominoes began to fall, hard. To be fair, the Robertson piece was a modestly-researched and well-intentioned piece, albeit perhaps misplaced. Rhabdo, while a serious disease, accounts for a miniscule percentage of CrossFit related injuries and is hardly unique to CrossFit. Yes, it happens. No, it’s probably not going to happen to you.

Luckily, a young lady by the name of Ericka Anderson came to CrossFit’s defense with her article entitled CrossFit Doesn’t have a Dirty Little Secret – You’re Just Irresponsible. In it, she suggested that if you get rhabdo, it’s your own damn fault. Seriously, she says this very thing: “Rhabdomyolysis – an extreme condition thwarted upon oneself – is not the fault of CrossFit. It’s not the sport, the organization or even the coaches. It’s your own fault.”

I could write an entire page on the fallacy of this statement, and while I am 100% a fan of personal responsibility, the author seems to be suggesting that a person ought to know the difference between the onset of basic muscle fatigue mid-workout and the early symptoms of rhabdo and act accordingly. I have known people who’ve gotten rhabdo, from mild to severe, and I can’t imagine a scenario where any athlete might have even a scintilla of a clue that rhabdo is imminent.

Enter Kevin Lavelle who got more to the point with his Why Do People Hate CrossFit? article. Kevin is a six-month CrossFitter and apologist who spring-boarded off Ericka’s article and tried to answer the question posted in his headline. How could anyone hate CrossFit? It’s blasphemous just to suggest it!

More articles, tweets, and defensive blows were thrown. Here’s the summary: Rhabdo article > No, it’s your own fault article > Why do people hate CrossFit? article > Good Morning America > tweets and more tweets from CFHQ > this article about why people really hate CrossFit > You are here.

You can go back to the first appearance of Homo erectus to find examples of “other-intolerance,” to wit:

Caveman 1: “Hey man, those dudes living across the valley? Their foreheads slope way worse than ours.”

Caveman 2: “I hate those sunsbiches. Let’s go club them.”

“Other-Intolerance” simply exists as a part of the human condition. As a species, we tribe-up, (which was necessary for our own protection in the early days of fending off threats), and then proceed to assess, then despise, those who are not like us. Seriously. Look around. This kind of behavior exists in every corner of every society. 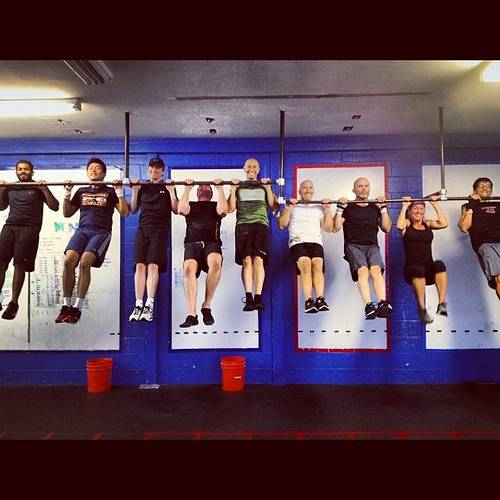 So without the preachy sociology lesson, what makes us different, for the most part is the fact that we, the CrossFit Kool-Aid drunkards, can’t for the life of us comprehend why someone might not LOVE CrossFit as much as we do. This manifests itself in many ways, but mostly in the rapid-response bloggerism that rises up like antibodies whenever someone deigns to challenge our sacred sport. Write a rhabdo article? We’ll swallow you whole. We don’t like criticism because we don’t get it. Why would you criticize this? Have you seen me lately? Don’t you want to look like me? What’s WRONG with you?

But secondary to the incredulity is, frankly, a healthy dose of hubris. You have to admit folks, we’re a cocky bunch, and we have been right out of the gate. CrossFit, Inc. conducts its business as though it invented the very foundations of modern medicine, and we, the disciples, aren’t much better. Think about it – one of the first things we learned to utter as toddlers in the sport was, “Our warm up is your workout.” Translation: we rock; you suck.

In the Level 1 certification, we were taught that we could play their sport and dominate, but that they couldn’t last two minutes in our world. We sneer with disdain at runners as we pass them on the road, and gleefully share our “awkward gym moments” videos. One of the most persistent threads on the CrossFit message boards is called “Seen at the Globo Yesterday” where users routinely share stories of people they’ve laughed at doing hapless non-CrossFit junk at some local big box gym. 7,500 posts and counting.

We can’t look at an object that we can grab with two hands without overhead squatting it and demanding a photo be snapped. We do our single-handed handstands all over the world and flood the photos onto Facebook. We hate bodybuilders (“Work out for aesthetic reasons? Good luck when you’re eighty.”) and scoff at Zumba. We dress our kids up in the new “Your mom, my mom” t-shirts.

Which is all fine. I totally get it, and I support everyone’s right to trumpet their love for the sport as loudly as I have and will continue to do. (Yes, I overhead squatted a Christmas tree. Guilty, and guilty.) But the reality is, we bring this on ourselves. Want to know why people hate CrossFit? It’s because we rarely show any compunction for expressing our disdain for them, whatever it is that they do.

The only reason the rhabdo article got so much traction is because we, the CrossFit community, FREAKED. We shared it, passed it around, asked why, acted incredulous, and responded with our blog articles, defensive position, and wagoning up. Had we just ignored it, it most likely would have fizzled out with not so much as a “like.”

So, what can we CrossFitters do, from a practical sense to make peace with the world at large?

So to my brother, Chris – I apologize, bro. Whatever regimen we choose, here’s hoping we both continue on a path to better fitness.