What is the best balance between technical training and conditioning? To what extent do judo-specific exercises also develop fitness? What rest and recovery requirements does judo training impose?

The founder of judo, Jigoro Kano, insisted that judo training, like judo itself, should be based on the principle of “maximum efficiency with minimum effort.” Yet even 75 years after his death, there has been little systematic study – at least in the West – of the metabolic demands of judo or of the best training methods for developing top-level judoka. What is the most effective balance between technical training and general conditioning? To what extent do judo-specific exercises also develop general fitness? What rest and recovery requirements does judo training impose?

A pair of papers from the University of São Paulo, in Brazil, seeks to answer these questions, examining both the past and current training of members of the Brazilian national judo team. The first study, a survey of 61 Olympic athletes spanning the history of Brazil’s participation in Olympic judo (1964-2008), examines differences in the training of medalists and non-medalists during the six months before the Olympic Games in which they competed.1 The second, a review article, discussed the heart rate, lactate levels, and other metabolic parameters associated with three common types of judo-specific training.2

Like most Olympic athletes, and like judoka in other countries, the participants in the first study typically trained in the neighborhood of 24 hours per week, spread across two 2-hour sessions per day, six days per week. The authors noted that support from the national federation and other sponsors is essential, both to help athletes meet their own financial needs and to ensure the availability of coaches, facilities, and support personnel.

Training sessions generally included both general strength and conditioning and judo-specific training such as technique drills (uchi-komi), throwing drills (nage-komi), and sparring (randori). The study found few differences between the training protocols of medalists and non-medalists, but did observe that the foundation for a medal is laid long before the six-month pre-Olympic period. It is likely that medalists had previously developed superior grip control and technical skills, but no data exists to verify this hypothesis. Within the six-month pre-Olympic period, the only notable difference was in the emphasis on ground-work randori – sparring on the ground. Medalists viewed this training as less relevant to judo competition, and did less of it, than non-medalists. Indeed, the authors observed, competitive judo matches are rarely decided through ground fighting. 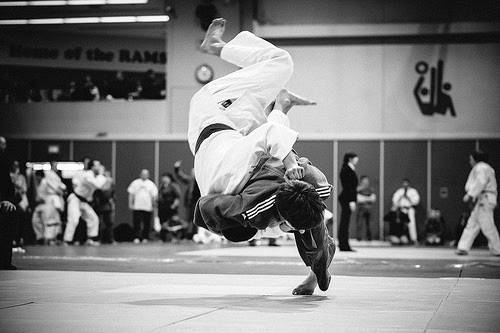 As noted above, individual judo training sessions typically last about two hours, regardless of training level. Top athletes training for a competition may have more training sessions per week, but the format of each session is somewhat consistent. Of the two hours, typically about one-third is devoted to general conditioning, one-third to technique and throwing drills, and one-third to randori. In contrast, a typical judo match can be as short as a few seconds, and will not exceed eight minutes. Thus, the authors observed, coaches need to carefully plan training and recovery to ensure their athletes are in peak competition form.

Uchi-komi is the judo term for repetitive technique drills. These can be performed at various levels of intensity, from very slow movements to drill the details of a form, to rapid repetition for conditioning purposes. Typically, the athlete takes the technique just to the point of balance breaking, without actually completing the throw. After intense uchi-komi drills, study participants achieved heart rates comparable to those seen in randori. Olympic-level judoka developed lower heart rates than national-level athletes, but it was not possible to determine whether this was due to better technical efficiency, superior fitness, or both. 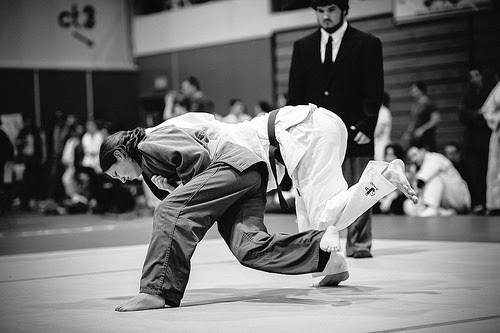 In nage-komi, the technique proceeds to completion of the throw. The effort required for each repetition depends on the athlete’s skill level: more advanced judoka tend to rely more on timing and leverage, and less on brute strength. Nage-komi practice is more demanding, particularly for the person being thrown. For example, one study paired each test subject with two partners to measure the maximum number of throws that could be completed in one minute. In these studies, both heart rate and blood lactate levels were moderate for the partner executing the technique, but caloric expenditures were very high, comparable to other forms of full-body resistance training.

The third exercise modality, randori, introduces an element of competition. While in drills, partners typically take turns being thrown, but in randori both partners simultaneously attempt to execute techniques. Depending on the goals of the practice, the range of techniques can be tightly limited – say to a set of techniques used in nage-komi drills in that training session – or can be completely open, constrained only by safety considerations and competition rules. Not surprisingly, this is the most demanding of the three modalities. Study participants achieved heart rates and lactate levels comparable to those found in maximal treadmill tests.

Based on their review, the authors suggested short, intense randori or drill sessions, with longer rest intervals to improve anaerobic fitness, while longer sessions at lower intensity are more appropriate for improving aerobic fitness. The authors found that the potential for overtraining is high enough to warrant ongoing monitoring of immune function, markers of muscle damage, and other potential danger signs.