Sports drinks may seem like a healthier kid’s beverage than soda and other sugary beverages, but that’s not necessarily the case. In fact, many schools are banning them altogether.

Sports drinks may seem like a healthier kid’s beverage than soda and other sugary beverages, but that’s not necessarily the case. In fact, last week a bill sponsored by the California Medical Association was proposed that would ban the sale of all sports drinks, including Gatorade and Powerade, in middle school and high school cafeterias. Sports drinks are already banned in California elementary schools. The bill would act as an amendment to the existing code that bans the sale of soda in schools.

This bill isn’t the first document to target childrens’ sports drink consumption. Sports drinks are also banned in Connecticut and New York City schools, according to the New York Times.

In June 2011, the American Academy of Pediatrics (AAP) also outlined the potential misuses of sports drinks for children and adolescents in Pediatrics journal. To begin, the AAP outlines the difference between sports drinks and energy drinks. Sports drinks are defined as beverages that contain carbohydrates, protein, or electrolytes, whereas energy drinks have an added stimulant, like caffeine or guarana. The document makes it very clear that “Stimulant-containing energy drinks have no place in the diets of children or adolescents.” Although sports drinks don’t receive such severe treatment, the AAP does recommend limited consumption for three primary reasons:

Although sports drinks tend to be high in calories, they have little or no nutritional value. Most sports drinks contain electrolytes, but the AP points out children don’t usually need additional electrolytes, since a balanced diet already meets the body’s needs. Regular consumption of non-nutritive, high-calorie beverages increase the chances of weight problems, which is why the Academy concludes, “Given the current epidemic of childhood overweight and obesity, we recommend the elimination of calorie-containing beverages from a well-balanced diet, with the exception of low-fat or fat-free milk, because it contains calcium and vitamin D, which are particularly important for young people.”

California state assemblyman Das Williams, who authored the 2012 bill that would eliminate sports drink sales from middle and high school campuses, cites sugar content as one of the primary reasons for the ban. “A 32 ounce sports drink has 14 teaspoons of sugar. Kids jacked up on that much sugar have a harder time learning,” Williams noted in a CBS article. Most sports drinks contain some form of sugar, whether it be the dreaded high fructose corn syrup or the less offensive sucrose. The high sugar content is also linked to increased risk of dental caries and tooth decay. Although children and adolescents need carbohydrates to fuel growth, the Academy emphasizes that carb intake should always be balanced with other nutrients, like protein and fat. The document notes: “Excessive intake of carbohydrate-containing beverages beyond what is needed to replenish the body during or after prolonged vigorous exercise is unnecessary and should be discouraged.”

Sugar isn’t the only culprit when it comes tooth decay. According to the AAP, many sports drinks also have a pH between 3 and 4, which is considered to be very acidic. Low acidity contributes to enamel demineralization, which makes them even more detrimental for dental health. Many sports beverages also contain citric acid, which has been linked to enamel and mineral loss. Tooth decay is already common in children and adolescents, and sports drinks just compound the issue. 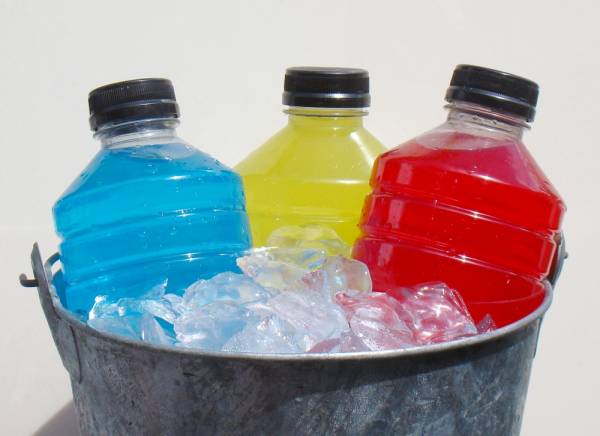 Despite these drawbacks, sports drinks aren’t all bad for children and adolescents. If your child is very active, sports drinks can help with electrolyte balance during an intense event. They’re particularly beneficial in very hot or humid weather conditions or during prolonged activity. In fact, the AAP states sports drink use during an extended period of exercise is “the most appropriate use of a commercial sports drink” for children.

As an occasional treat or a game day beverage, sports drinks are appropriate for children and adolescents. As with other sugary treats, like soda and candy, the key is to limit sports drink consumption and educate your children about their potential health effects. Whether or not schools decide to ban sports drinks, your children should know about their proper use and should also be able to distinguish a Red Bull from a Gatorade.