Well, the answer to that question is to learn the handstand push up strict.

Muscles in the Handstand Push Up

I could mention every muscle used in the handstand push up, but it would be literally every muscle in the body. When doing this exercise, you must keep the lower body activated to keep balance and keep the body from doing the “banana back.” Your shoulders and arms should be in activation to hold your body weight, all the way down to your fingers to keep balance when you feel your body begin to waiver. 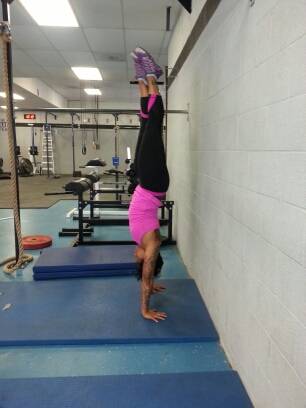 The Importance of the Handstand

When learning the handstand push up, it’s important to master the handstand first. If you are not comfortable being inverted and unable to hold a handstand without a wall for at least a few seconds, you must go back to your handstand basics. Now, most people bypass this element. As soon as people learn to invert against a wall, they begin to try to kip into the handstand push up, but there can be harmful implications of learning to kip before doing it strictly.

The Dangers of Kipping the HSPU

One danger, and probably the most important aspect of not having the baseline strength for the handstand push up, is the velocity at which you come down in the tripod position (the lower part where you are basically in headstand – pictured to the right). When athletes do not have the strength, they tend to come down fast and hard. The reason behind this is because the athlete has not developed the control over the lowering aspect of the handstand push up. 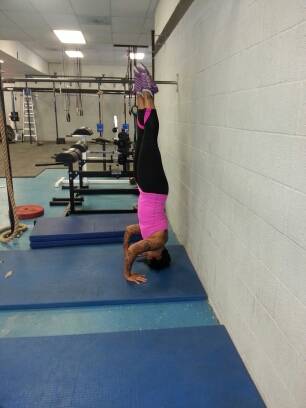 When coming down at a fast pace, what ends up happening is the athlete puts a lot of stress on the cervical spine. The natural lordodic curve of the cervical spine can be lost, which requires treatment from a chiropractor or physical therapist. Now, you may be thinking, “My neck muscles are nice and strong, that will not happen to me.” Well, if you have not developed strength to do the handstand push up strictly, more than likely you have not developed that much strength in your neck. Plus, you never want to gamble with your neck, it is so important to keep it in a safe position.

Now, before I scare anyone, most of this force is absorbed by the cerebrospinal fluid, but risk is still there. Think about your weight, then the velocity at which your body comes down as you “land” on the ground in tripod position. This can be a bit jarring for the brain! Any hard impact can make the brain hit against the skull, causing serious injury such as brain bruising, swelling, and blood vessel tears. As mentioned above, the risk is there, but not imminent, and probably the worse thing that can happen to most is a nasty headache. But, please, hink twice before doing the handstand push up without the strength to do one strict.

Most of the CrossFit athletes I have seen in the elite level have the control to do the handstand push up strictly, so when they begin to kip, they have control all the way down from the top position. The movement is faster kipping because of the way they come up from the tripod position, but not necessarily when they come down. But with beginner athletes diving right into the kipping version, they are moving quickly in both directions – the way they come down and the way they go up, and this is not safe.

My recommendation is you should be able to do at least ten strict handstand push ups for males and five to ten for females before attempting the kip. Also, I would add that athletes should be able to hold their handstand by themselves, without the help of a person or wall. As I was told in training, a real “Rx” handstand push up is one done strictly – without a wall. That should be a goal athletes try to attain rather than how fast they can go. Keep your body safe. You only have one to work with!