Most of us spent a huge portion of our childhood being told to do things we didn’t want to do. We had to be told every day to get out of bed, get ready for school, eat our vegetables, do our homework, brush our teeth. And on it went on for years, until we finally struck out on our own in the world, fully capable of doing it all for ourselves.

As adults, we continue to do all sorts of things we don’t want to do, because we know they’re for our own good. We pay our taxes, mow the grass, and change the oil in the car. We go to the dentist, to family gatherings we’d rather skip, and to jobs we don’t like.

So how is it that, when it comes to taking care of ourselves physically, people just can’t seem to muster up the gumption to do what’s necessary, even if it isn’t always enjoyable?

We use a whole lot of words on this website to describe the various concepts and nuances of health and fitness, but the essence of physical improvement is simple: don’t eat crap, move a lot, and get adequate sleep. But to hear many people describe it, there is an immense metaphysical chasm that separates those who bear the title “athlete” from those who watch them on TV.

Part of that fallacy is understandable. The athletes we see in the media are peak performers who have spent a lifetime honing their skill and physique. The distance between the average lite-beer-swilling couch potato and the Olympic sprinter he just watched set a world record isn’t vast. It’s inconceivable.

But in what other area of life do we set ourselves against such a standard? We don’t tell our first-graders they should stop writing stories because they’ll never be Kipling. We take our kids to piano lessons and soccer practice, with the full knowledge that we aren’t raising the next Rachmaninoff or Messi. We still go to our jobs every day, even if we have no realistic expectation of ever being the CEO.

When someone looks at an athlete and says “I could never do that,” what they’re really saying is “I don’t want to put in the work that you did to get where you are.” The heart of the difference is not ability or even talent, but desire. Michael Jordan might’ve made a fine accountant. But his desire was basketball, and so he mastered it as fully as anyone has before or since.

To be sure, not everyone has the level of athletic talent, desire, and determination displayed by the world’s elite athletes. So if someone doesn’t have the desire to be an athlete, isn’t that okay? Not really. The human body was undeniably built to walk, run, climb, lift, and jump. We have specific physiological adaptations, like enormous lungs and the ability to sweat, that are only relevant to athletic organisms. The human body is, by design and construction, an athletic machine. To neglect the required maintenance of that machine is to deny its nature.

So why do they do it? Because they perceive the chasm. That inverse mirage between where they are now and where they’d like to be. They are convinced of their own inability to undertake any sort of training at all. Or they believe if they did train, it would be so painful, and the progress so infinitesimal, as to not be worth the effort. So instead of sweating in some dungeon of a gymnasium, trying to chase down a physique they just weren’t meant to have, they go to great lengths to justify rotting away on the sofa.

But those of us who stand on the other side of that imagined chasm know it isn’t impassable, because we had to cross it ourselves. We had to do it of our own will and for our own reasons, but the same basic principles applied. We made changes to our diet, a little at a time. We found ways to move ourselves that challenged and stimulated us mentally as well as physically. We prioritized our sleep to make sure our bodies had time to repair and grow from the stimuli we threw at them during the day.

We didn’t give up when it was hard right away, or when results were slow to come. We sweated, sacrificed, and gritted our teeth through every manner of discomfort, inconvenience, and even embarrassment. We fell off the wagon, then got back on and started again. Through grim, consistent determination, we made our bodies subject to the will of our minds, rather than leaving our minds slaves to a rebellious and complaining body.

We saw the chasm, too. But we trained anyway. 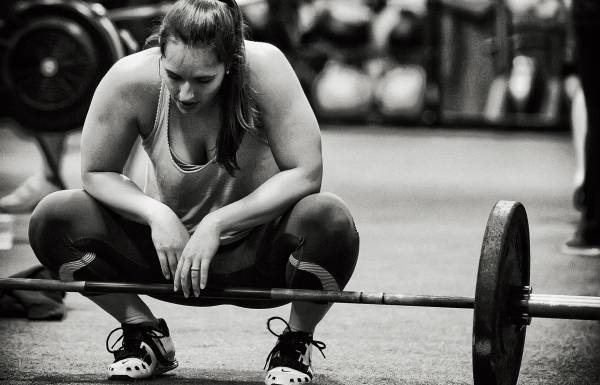 The road to becoming physically and emotionally stronger is riddled with ups and downs.

The chasm is wide and deep, and it’s made entirely of your excuses. It is teeming with your busy schedule, your bad knees, the weight you’ve put on since high school. It is your distaste for sweating and breathing hard, your fear of looking stupid, your self-defeating low self-esteem. It is every rationalization you’ve ever made for not doing what needs to be done to properly care for the only body you’ll ever have. It is the misguided modern notion that anything uncomfortable isn’t worth doing.

Everybody has that chasm, and everybody should be training in spite of it, or even because of it. Find something you can do, and then do it. Then do a little more of it. And then do something else. Take up cycling, or yoga, or weightlifting. Take a spinning class. Go for a hike or take up rock climbing. Adapt your chosen activity to the skills and weaknesses you might have. Instead of sitting on your hands, paralyzed at the immensity of the chasm you’ve created, find ways to get over, or through, or around it. And then get going.

If you get off the couch tomorrow and work hard for a long time, will you ever become Rich Froning? Probably not, but I’d be willing to wager that’s not your real goal, anyway. Being a vastly improved you, on the other hand, is still on the table. It will not be easy, it will not be fast, and it will be decidedly uncomfortable. You will not be immediately impressed with yourself. Quite the opposite, you will probably be horrified and disgusted with yourself for some time.

Now it’s time to do your homework. Get out a blank sheet of notebook paper and your #2 pencil, and make three columns.

It’s time to get across that chasm. Right now. If you get off the couch tomorrow, you will be better than yesterday. If you do it again the next day, you will be better still. If you keep doing it, consistently and intelligently, no one can tell you what you may achieve.

Maybe you’ll lose 100 pounds. Maybe you’ll rediscover the pure joy of riding a bicycle. Maybe you’ll be able to run a mile, or ten miles. Maybe you’ll regain the dignity and confidence you haven’t felt in too many years. But if you wait a week, you’ll wish you had started sooner. Just start today. 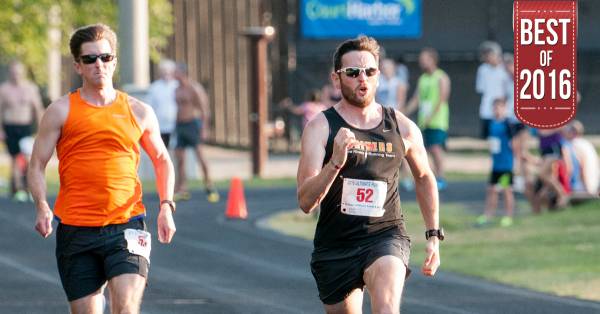