Minimalist Running, With a Twist: The New Airia Ones

These shoes are a good middle ground between traditional running shoes and minimalist shoes.

I love running, so when I was offered a chance to test and review a pair of new Swedish-designed Airia Ones, I was totally pumped. My current shoes have a hole in the toe, so this was going to be a big upgrade. Also, I have come to trust the Swedish and their principles of design. (Note: the shoes did not require assembly.)

The Airia One is certainly unlike any other shoe that you will find on the market. The heel is round, which the company points out to be a feature that can accommodate a variety of strike patterns. The sole features different bumps and angles – “Newtonian angles,” as Airia puts it – that are meant to create an “energy flow” that translates into faster, more efficient running strides. “You will unleash the hidden power in your running step” is a phrase the company uses in their product marketing.

The rubber Vibram sole features an uneven heel drop when comparing the heel to the inside of the midfoot (6mm) and the heel to the outside of the midfoot (0mm), which is meant to play into the “flow of energy” design. The shoe is wrapped in a thin, bone white breathable mesh that makes them quite light overall. But buyer beware. As I will discuss later, this is one of the features that ultimately makes these shoes outdoor- and weather- unfriendly.

The first thing that stood out to me when starting to jog in the Ones was how odd they felt as compared to the minimal footwear I have become accustomed to over the past couple years. Also, you can’t walk in Ones. I mean, you can, but they aren’t well-suited for taking a morning stroll. The company advises consumers that the shoes are not suitable for casual wear because of a design that is meant to optimize a runner’s stride:

Uniquely designed irregular and sharply angled sole and upward-pointing toe harness the untapped power of the human body and doesn’t leak energy like other running shoes … Every tiny push into the ground is optimized to advance you through to the next running step[.]

Ultimately, what Airia sought to design was a performance-enhancing shoe that exists outside of the traditional running shoe paradigm, and they certainly accomplished the latter.

I Must Bare My Sole to the Readers

Before I go any further with this review, I must disclose something about myself: I have flat feet. My running mechanics are different than the average runner. I do spend a lot of time trying to develop better foot strength and proprioception along with hip and core stability, but my gait pattern, especially when fatigued, is less than ideal.

“I could see them being a potential middle ground between traditional running shoes and minimal shoes for someone who would be willing to experiment.”

Here is the thing, though – yes, running is a skill that can be developed to a certain point, but our ability to run well is predominately dictated by the structure of our bodies. Strength coach Mike Boyle mentions in Advances in Functional Training: “You can’t run to get a runner’s body. You have to have a runner’s body to survive running.” I am not built to run well, and honestly – I don’t. I just do it because I love it.

This is why I encourage you to look at any claim of “faster running” with a giant glass of incredulity. Are these “bad” shoes? No. Despite my teasing, there are some people out there who might really enjoy wearing the Ones. They are wide, the interior features a comfortable Ortho-lite sole, and they are much lighter than any other shoes I have tried (240 grams for a US men’s size nine). I could see them being a potential middle ground between traditional running shoes and minimal shoes for someone who would be willing to experiment. 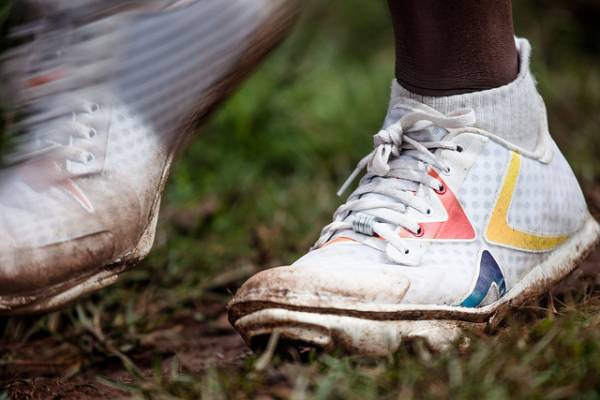 But for me, and for any other person who has flat feet, or for any woman (or man) who has wider-than-average hips and naturally pronounced knee valgus, I strongly encourage you to steer away from these shoes. In general, shoes remove a major proprioceptive information center from our body. For many people, the wrong shoes can make everything worse (which is why I am vehemently anti-orthotics and pro-barefoot strength development).

“Ultimately, what Airia sought to design was a performance-enhancing shoe that exists outside of the traditional running shoe paradigm, and they certainly accomplished the latter.”

The inward-sloping design of the sole caused my ankles, tibias, and knees to collapse and rotate even more so than usual. I felt unstable and uncomfortable, especially when running on the varied terrain of the Baltimore harbor – bricks, docks, and cobblestones. I often had to stop out of fear that I might turn an ankle. A research aside: the product study by Airia using 100 runners was conducted on an indoor track.

My results? The Airia ones caused me to run slower. I wear a Fitbit Surge when I run. I generally aim for a total of two to four miles, and my average one-mile pace is between 9:00-10:00 per mile. Very average. With the Ones? During about nine total miles of running, my time dropped to a barely-jogging 12:00. After my fourth “run” in the Ones, I actually turned off my Taylor Swift playlist, walked back to my house (it wasn’t as hard as I thought it would be) and put on my old shoes to finish my workout.

A Shoe Is Just a Shoe

Just like my Shaq Instapumps during the 1990s didn’t get me any closer to the NBA than my 5’3” female frame would allow, there is no shoe on the market that will make you a faster or more efficient runner. “Good” running is a combination of great genetics, core strength, hip stability, well-coordinated contralateral patterning, and, of course, excellent conditioning. Shoes don’t do that. Training does that (along with your parents).

“In general, shoes remove a major proprioceptive information center from our body. For many people, the wrong shoes can make everything worse (which is why I am vehemently anti-orthotics and pro-barefoot strength development).”

In the end, if you find yourself looking to equipment as a way to increase performance, I will encourage you to re-orient your mentality towards strength training and improving your posture, stability, and motor control. Spend some time barefoot to create a stronger foundation.

As far as the Airia Ones, all I can do is give them ye olde sideways thumb. I can neither approve nor disapprove, because you are the only one who can ultimately dictate what is comfortable. If you have an ideal runner’s body, if your feet already have a lot of miles on them – by all means, try the Ones. You might love how light they are.

Other than that, all I can do is advise you of this: a shoe is only a shoe. It takes a person to make an athlete.

Airia Ones are available on AiraRunning.com for $99.00.