Moderating the Knees In Versus Knees Out Squat Debate

Do you push your knees out when squatting or do you let them come in a little at the very bottom? Is either of these a bad idea? Or is one a better idea?

The debate of knees in versus knees out is one we all benefit from thanks to a few very intelligent people wanting to split some hairs.

The debate of knees in versus knees out is one we all benefit from thanks to a few very intelligent people wanting to split some hairs. The buzz on this topic began this past summer with Dan Green’s article about allowing his knees to come inward while squatting and Teo Kirksman of LiftHard posting Why We Do Not Believe in Knees Pushed Out When Squatting.

Shortly after, renowned Olympic weightlifting coach Bob Takano posted a series of email exchanges and comments between some notable individuals. This was prompted by an email from Dr. Brendan Murray to Takano regarding an increase in injuries in CrossFitters due to pushing the knees out to overcome flexibility problems and achieve a lower position in the squat.

I’m not advocating for one side or the other, but trying to dissolve what appears to be a communication barrier so we can all gain from the conversation. It seems to me this conversation has perpetuated because the two sides have exaggerated the other side’s cueing.

A great pearl from Diane Fu comes to mind: “A cue is a relationship between a coach and an athlete, specific to that moment for something that is going on – trying to solve a specific problem.”

Who Are the Two Sides?

Although we shouldn’t label either party as one side or the other, as it is simplistic to do so, for the sake of this debate, we will put a few faces to the sides:

Knees Out (or the Kelly Starrett side)

Dr. Kelly Starrett essentially single-handedly represents this side, not because there aren’t other supporters, but because he has the greatest name recognition, influence, and respect. Starrett lists several well-known coaches who at least at times cue “knees out,” so he is in no way alone on this side. Louie Simmons of Westside Barbell also gets brought up on this side frequently.

This side could also be perhaps labeled the “not knees in’ side. Kelly Starrett recently responded to critics in a video series on his website titled The Knees-In Squat, which I would highly recommend watching.

Dr. Murray indicated he was seeing athletes with hip and knee injuries due to the knees out cue. Keep in mind this side is advocating for a slight knees-in moment at the initiation of coming out of the very bottom of a squat – not performing the entire squat with knees inside the feet (valgus knee).

You only need to watch a short amount to get the idea. Here is a clip of Long Qingquan:

Dan Green wrote an article this past summer indicating that bringing his knees in slightly when coming out of the bottom of the squat allowed him to improve his already massive squat.

Why Coach Knees Out?

This was never really about the knees. The knees end up going “out” when you create strong external rotation torque from your hip and apply into down into the ground through your feet, which further creates an active and stable arch.

The real purpose is to activate muscles to set the pelvis and lumbar spine in a neutral and stable position. This allows for better position for injury prevention as well as utilizing your body as a system to generate maximum power.

Knees out is not about finding a way to compensate for poor mobility and flexibility to achieve depth in the squat – at least not in relation to Starrett’s instruction.

Why Coach Knees In?

This is a brief coaching cue, utilizing a slight active knee pull-in while coming out of the very bottom of a squat for the performance benefits it creates while training for and performing squatting patterns. This is used to generate more leg drive and speed coming out of the bottom, according to Dan Green.

Keep in mind the knees don’t stay in. They fairly quickly swing back to neutral, as the goal is to drive upwards, not to expend energy laterally. To my knowledge, no one is advocating this as a technique that should be specifically taught to or utilized by relative beginners.

I have yet to see the knees-in side explain much on the biomechanical benefits to performance, dispel that this technique is riskier, or address the hip impingement issue. It comes across largely as experiential at this point.

I would like to hear more from this side on hip and pelvis biomechanics and possibly the role of the adductor magnus and quadriceps muscles. (The posterior chain gets all the love these days.)

“Knees out” never meant turn your foot out externally as far as it can go to get your hip into maximum external rotation and then squat all the way down and back up that way – as Starrett points out in his video (see the screenshot below).

“Knees in” never meant point your toes out 45 degrees, and buckle your knees inward until they’re touching, and then squat all the way down and back up like that. 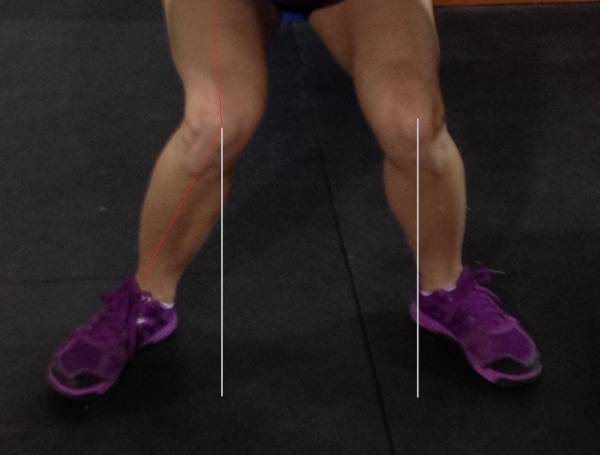 Starrett wins on biomechanical perfectionism across broad movement by utilizing principles that take into consideration both performance and injury prevention. If you understand the principles Starrett advocates, you don’t need to memorize individual exercises or movements.

You can understand a safe and effective way to move in all circumstances. The knees-in side wins on maximizing performance for at least some people on this specific issue. Merge the two intelligently and everyone wins.

Personally, I feel like I’ve come out a winner from the conversation since it has increased my understanding of both biomechanics and performance.

Define the Conversation to Communicate

It’s hard to communicate when we don’t define the goals of the conversation. Some of the things being talked about, but not necessarily declared or defined, are injury prevention, maximum performance, longevity, different clients, different goals, and biomechanics.

Starrett seems to acknowledge that a brief knee valgus in the bottom position of the squat may be a necessary component in that it may be unavoidable when lifting maximally – this nuance is a performance piece.

When the goal is maximum performance, then momentarily allowing the knees to come in or actively pulling the knees in a small amount can be beneficial. You also may have no choice in the matter, and the takeaway would simply be to not overly worry about your knees coming in a little bit for a brief moment. 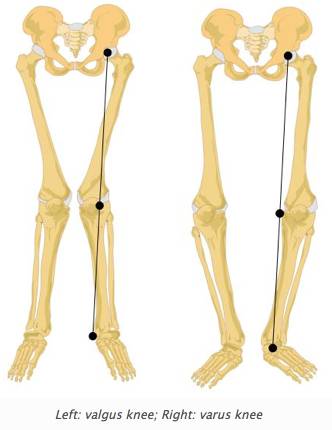 An important concern of Starrett’s is the slippery slope argument. When is it too much knee valgus, and is it going to create habits that bleed into other movements and create harm? Harm being defined as either injury or decreased performance. It also seems he is concerned with universal principles that can be coached on a large scale, from children to soccer moms and weekend warriors to Olympic caliber weightlifters.

To me, this is where the conversation becomes too broad and Starrett takes his case too far. We need to intelligently take into consideration potential differences in the population. It’s more than feasible that top-level athletes have some differences when compared to beginners or even amateur athletes.

The knees-in side misrepresented Starrett by overly associating his name with the knees-out cue. The knees were never of primary concern. The whole purpose was to create a situation to set and stabilize the pelvis and lumbar spine in a stable and neutral position with a somewhat secondary benefit of also creating a stable arch in the foot. The knees happen to be the visual we all see and can guide us as to what is going on in the hips.

As Starrett pointed out in his video, with your feet fairly straight forward (zero to fifteen degrees), there’s no way you’re going into hip external rotation end-range and creating associated injuries nor will the knees bow into a varus position.

Those on the knees-in side that credit Starrett with influencing people to put themselves at risk for these injuries appear irresponsible and ridiculous. Starrett is not accountable for people misunderstanding or incorrectly performing what he teaches.

I think we can intelligently apply a principle that Starrett has at times directly spoken about and other times alluded to. That is, if you take care of your mobility and your tissues as well as move correctly, you have a larger functional range to mitigate injury. If you’re missing all kinds of mobility, then your capacity for error is reduced and your chance of injury increases.

I say, let’s apply that intelligent notion to this issue. If you can squat with your pelvis and lumbar spine in a stable, neutral position and maintain this throughout your squat, then you have earned the right to utilize an active and intentional moment of performance-purposed knee-in action – if you find that it’s even beneficial to you and does not begin to create problems or injure you.

There are some complexities to the knees-in issue that don’t make it suitable to everyone, but it can be beneficial in the right circumstances. Personally, I am quite a stickler for form and previously abhorred the notion of letting my knees come inward at all while squatting.

Then, I tried the active knees-in move (quickly followed by bringing my knees back to neutral) and really liked it. I was able to maintain pelvic and spine control and my knees didn’t explode. For me, it’s a little too early to tell, but I plan to continue experimenting with it. If you’re fairly experienced, perhaps try it for yourself.

Ultimately, there is no definitive answer that we can wrap into a two-word cue such as “knees in” or “knees out.” This an issue that needs to be understood by principle and perhaps worked out between intelligent coach and client or intelligent doctor and patient.