Since water consumption is so important for good health and athletic performance, it makes sense that athletes would try to improve their water intake with man-made products. However, according to a recent study in the Journal of the International Society of Sports Nutrition, nature might have a better answer.

In the study, the researchers examined deep mineral water’s effects on athletic recovery.

Deep mineral water is like the normal mineral water you may be familiar with, but it is derived from sources in sandstone, dolomite, and gypsum rock over 2,000 feet underground. According to the researchers, the water used in the study has been there for over 10,000 years.

As you can see in the table below, the water contained numerous minerals, most notably magnesium, calcium, and sulfate. The deep mineral water was compared to purified tap water (listed as placebo on the chart below), which still had some mineralization, but much less so than the mineral water. 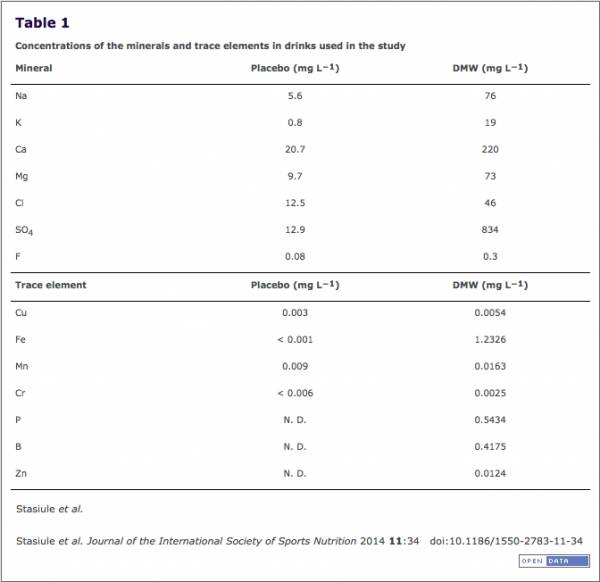 Because of the increased nutritional value of the deep mineral water, it’s possible that it might assist the body in recovery after exercise. The participants in the study ran on a treadmill for an hour and a half at about five miles per hour. After running, the researchers measured how much water the subjects had lost. The participants then drank 1.5 times more water than they had lost. They drank either the mineral water or the tap water, in a random order. Then they went in a week later and repeated the process, but with the other water.

Once they were done, the subjects had blood drawn to test for muscle damage. The researchers also performed aerobic tests and measured power output of the subjects’ legs four hours after exercise, a day after, and then again two days later. A faster return to baseline values would indicate a faster recovery.

Leg power declined about the same in both groups, but recovered faster in the mineral water condition, reaching statistical significance by 48 hours. The muscle damage markers, on the other hand, remained the same in both conditions. So while performance returned to normal at a faster rate with the mineral water, the water’s recovery effects did not translate over to faster repair of muscle fibers.