For as long as I can remember, CrossFit, Inc. has posted non-CrossFit related content on both their website and social media. Before there was such a thing as Facebook, Instagram, and Twitter, there was CrossFit.com. Rest days on the main site have always featured random, decidedly un-CrossFit links.

For as long as I can remember, CrossFit, Inc. has posted non-CrossFit related content on both their website and social media. Before there was such a thing as Facebook, Instagram, and Twitter, there was CrossFit.com. Rest days on the main site have always featured random, decidedly un-CrossFit links.

CrossFit.com – How It Used to Be

For example, on April 3, 2008, under a rather innocuous image of two women overhead squatting some surfboards on a beach, are two links. No explanation, no preface, just links.

One was a link to a Wikipedia article about a film called Fitna and the other was a link to an article about the filmmaker. The film is a short documentary made by Dutch filmmaker Geert Wilders that attempts to show how the Qur’an motivates its followers to hate all who violate Islamic teachings. That’s right – CrossFit.com linking you to a questionable piece of anti-Islamic propaganda.

What ensues in the rather lengthy comment thread that followed the post is a serious, but seemingly extremely civil discussion about Islam, atheism, and religion. It’s generally cordial and calm.

“Back then, the community was small and everyone had a common purpose – the love of this new thing called CrossFit.”

In those days, both the comments on CrossFit.com and the associated message board were moderated. On the daily WOD, posts did not go live until they went through a moderator for approval. On the message boards, the mods were hovering like vultures over a dying wildebeest. One wrong move and you were banned.

Back then, the community was small and everyone had a common purpose – the love of this new thing called CrossFit. For the most part everything was civil. Sort of like what you might see now if you visited the Opex Fitness blog or the CrossFit Invictus competition blog. Results, commentary, community, encouragement, and so on.

CrossFit has always posted non-CrossFit related content. I don’t now, nor have I ever had an issue with that. If they want to post a link to a Vivaldi flute concerto, that’s cool. If they want to post links to an article about prostate health, great. The non-CrossFit-related posts simply amounted to items that CFHQ, specifically HQ’s media department, found interesting.

At some point though, someone uttered the words, “What the hell does this have to do with CrossFit?” Once that question was asked, dissonance entered the conversation and from that moment there was no turning back. You almost get the sense that the publishers of the website started doing what they now seem almost notorious for: “You don’t like that? Well, then, get a load of this!”

The CrossFit “Community” Is Turning on Itself

And the civility and decorum that once pervaded online discussion has evaporated. So, you may ask, “What the hell does this have to do with CrossFit?” This: 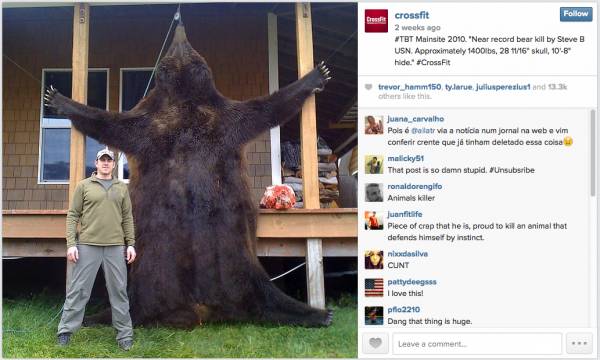 In theory, this image of a recent bear kill is no different than Vivaldi’s concerto or a link to Fitna. It’s a post to an image CFHQ thinks is interesting. Although, one might argue that based on CF’s social media history this skews more toward the “Wait till they get a load of this!” end of the spectrum.

“The problem lies in the audience reaction – not so much to CrossFit itself, but to each other,”

I am neither pro-hunting nor anti-hunting. That a 1,400lb bear, eviscerated and strung up by its jowls, is the subject of a social media post by CrossFit is not the central point. CrossFit has always posted controversial links without much fanfare.

That’s their right and if you scan the overall pictorial history of any of CrossFit’s social media outlets, you’ll see that 99.9% of the images and posts are CrossFit related. Therefore our distaste of a fitness company posting non-fitness-related content is misdirected. Most likely because that one non-CrossFit-related image or link is usually a whopper.

The problem lies in the audience reaction – not so much to CrossFit itself, but to each other. In the 2008 Fitna discussion, tempers were even and discussion was civil. But this where we are in 2015:

“You piece ofshit.Who said that animals are suposed to be hunt?? Your stupid god?”

I could go on, but you get the point. The community, or shall I say “community,” that holds itself out at times as a world-wide love-fest thinks nothing of turning on itself within the confines of an Instagram post, and often behind just enough of a pseudonym as to be anonymous. It’s much easier to attack someone who calls themselves “@evo344” than it is “Karyn Sykes.” Although sadly, that happens as well.

You can go on any right-leaning or left-leaning website and read the comments of any given story and watch the monsters devour each other. That’s almost commonplace and expected now, even when a site’s disclaimer implores the reader to “Keep comments civil.”

“One thing CrossFit social media folks are not is stupid. They are fully aware of the potential reaction that some of their posts might elicit. “

But you would hope and expect that CrossFit – with its “the loudest cheers are for the one who finishes last” mottos and “what I love most is the community” claims – would step back and consider that rich premise before choosing to skull-fuck a fellow CrossFitter on the CrossFit social media sites.

Or, maybe, just maybe, consider that you’re being trolled.

One thing CrossFit social media folks are not is stupid. They are fully aware of the potential reaction that some of their posts might elicit. In fact, in response to outrage over some CrossFitter overhead squatting a dead alligator, they posted several more CrossFitting-with-alligators images. (“Get a load of this!”) 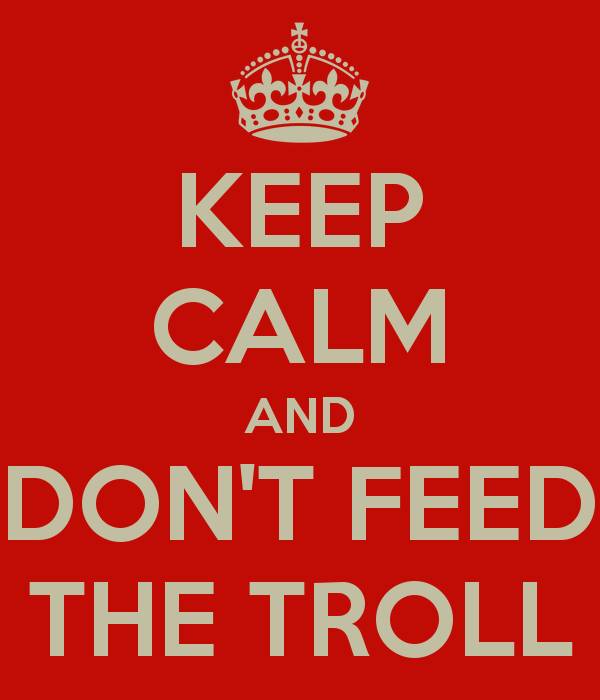 Like any successful online troll, the reaction they get feeds the beast and the din of outrage only serves to energize them more. So with the image of the dead bear, consider that CrossFit’s social media team has succeeded in not only bringing forth a reaction against them, but they’ve pitted us against each other.

And they simply don’t care. The disconnect between the social media team’s understanding that affiliates need to grow a business and their “fuck PR” stance is palpable. You’re on your own affiliates – CrossFit does what they want.

Speak Out But Remain United

But as for us, the commenting world, we have but one choice – to fight back against the trolling attempts. Remain civil. It’s always good to speak out, but remain united. Even when there is a bear hanging from a pulley or a dead alligator being push pressed, you have two choices:

One of those responses causes the CrossFit social media team to squeal with delight. The other disappoints them.