Protein Requirements for the Ageing Athlete

You may be surprised to learn exactly how much protein you need as you get older.

I was asked to pick a subject matter that would be of interest to the athletic population that read Breaking Muscle Australia and thought what better than the actual subject of breaking muscle.

I was asked to pick a subject matter that would be of interest to the athletic population that read Breaking Muscle Australia and thought what better than the actual subject of breaking muscle.

The information in this article is directed towards the slightly older population, so if retirement and old age are still decades away, you could be forgiven for thinking it isn’t relevant to you. But you’d be wrong. One day you’ll fall within that age bracket. And unless you came from a test tube, your parents and grandparents are likely to be there already. If you care about your future health and theirs, read on.

The importance of protein becomes even more important as you age. [Photo courtesy of Pixabay]

During my training to become a nutritionist I had the privilege of learning from several of the world’s leading professors in Sports and Performance Nutrition. Dr. Leigh Breen and Dr. Stuart Phillips are lecturers in Exercise Physiology and Metabolism, with a special interest in the aged (>60 years of age), muscle, and exercise. I found their lectures fascinating in that while outlining the process and negative effects of ageing, they simultaneously focused on the methods and means to reduce and even reverse these outcomes. This was an eye opener to me and made me question the traditional approach to training and nutrition that is often taken with older clients.

Ageing is associated with sarcopenia, a syndrome characterized by a decline in skeletal muscle mass and associated declines in strength.1 This has the effect of reducing the capacity to perform functional task and sport, and can therefore reduce quality of life. This syndrome is not just for the “elderly.” By definition, “elderly” are people who are over 60 years old. People of this age may not feel old, but the physiological effects occurring in their bodies are ever-present and ongoing. Despite their best efforts the process is still likely to occur. The following advice is of particular importance to anyone over age 50.

Estimates put the number of people in the world with sarcopenia by 2050 at a massive 200 million.2

Sarcopenia is attributed to several factors, including reduced physical activity, inadequate protein intake, and reduced ability to synthesize protein in comparison to younger people. Think of this as “anabolic resistance” – anabolic meaning building up, catabolic meaning breaking down. This resistance is attributed to reduced sensitivity to insulin and its ability to reduce body protein loss. Several other factors are noted in the scientific literature including altered protein absorption, reduced blood flow, and perfusion and altered cellular signaling pathways.3 The process or progression of sarcopenia is characterized by chronic alterations in skeletal muscle protein turnover, where rates of breakdown (catabolism) exceed rates of protein synthesis (anabolism). Unfortunately, as you age, you simply don’t function the same way as you used to – even if you are exercising hard.

I was chatting to my father the other day about the diet of the sailors on the America’s Cup team, ORACLE TEAM USA that I currently work for, and what they have to eat to ensure they perform at their peak.

My dad is 70 years old, about to turn 71. He asked about the exact amounts of macros (protein/fat/carbohydrates) they consume on a daily basis, so I outlined the approach the guys take with food and drink and the targets they are all supposed to achieve. He then asked, “Is this what I should be doing?” My answer was “No.”

If you’re thinking, “Obviously he doesn’t need as much as professional athletes,” you might be surprised to learn what the older population really needs in terms of protein and muscle protein synthesis (MPS). Below are nutritional strategies for someone who is involved in sport and is approaching the magical age of 50 or above.

A Day in the Life

Think of an average day’s meals. Breakfast consists of a bowl of cereal, maybe a couple of bits of toast, even a green juice. Lunch is a sandwich or wrap at your desk. You grab an apple for a mid-afternoon snack. Finally, dinner is a meal of steak and steamed vegetables. Sound familiar? This routine very typical of what I continually find in my older clients’ feeding behaviors.

Below are charts from one of my sporty 62-year-old female client’s food diary. She displays a moderate- to high-carbohydrate consumption, with low protein ingestion. Even when the client was instructed on the amount of protein to eat, she found it difficult to achieve the volume required. Before we learn how to improve protein intake, it is important to understand how much protein you should be aiming to get on a daily basis. 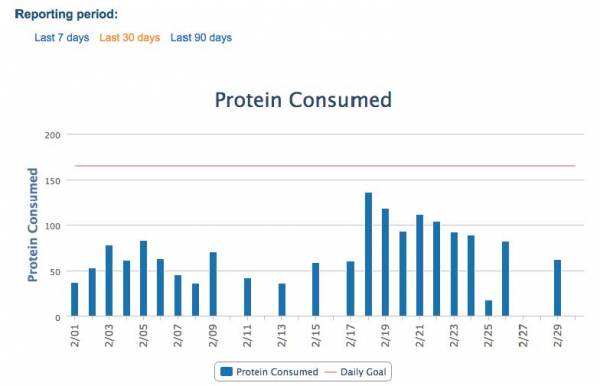 Note the distinct increase from 2/18 where an intervention was applied. [Chart courtesy of Scott Tindal] 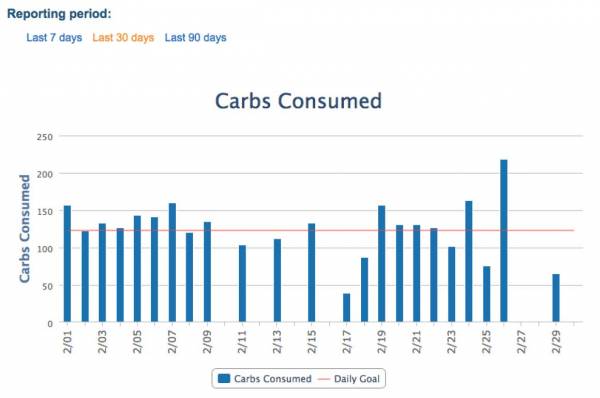 You will note a distinct increase from 2/18 where an intervention was applied. [Chart courtesy of Scott Tindal]

From the available scientific literature we know that people approaching age 60 should be consuming at least 40g protein per meal.4 This is significantly more than the 20-25g of protein that a younger adult would require per feed to stimulate MPS.5,6 If you fall into the 50+ age bracket you should aim to consume around 2-2.5g/kg/bodyweight per day. If you weigh 60kg you should eat at least 120g-150g of protein per day in combination with a quality resistance-training program. If you eat three meals per day, that equates to 40-45g of protein per feed.

What does that mean in real food terms? 100g of chicken contains roughly 20-25g of protein, so you should aim to eat around 200g of chicken per feed. Red meat, pork, and fish are similar in terms of their protein content. This can sometimes be a chore for smaller people, especially women who may struggle with eating a high volume of food. If that is case, have as much whole food on your plate as you can comfortably eat and top up with a protein supplement.

I often get asked what type of protein supplements are best. Your taste buds, moral preferences, and digestive system will all determine what supplement you choose. I recommend whey protein isolate as first choice. Whey protein isolate is the most researched form of protein powder on the market and has the most evidence to support its use over other forms. It has the highest rate of PDCAAS (Protein Digestibility Corrected Amino Acid Score), a fancy system that rates the quality of protein based on its ability to deliver essential amino acids to the person consuming it.6

Whey isolate also has the highest amounts of leucine. Leucine is one of the three branched chain amino acids (BCAAs) that are considered essential for increasing MPS. If you are struggling with eating the necessary volume of food, even when supplemented with a protein shake, then adding just 3g of leucine to a glass of water should be advantageous to helping maintain lean muscle mass. Breen and Phillips speculated that whey stimulates MPS more effectively than casein or soy protein because whey contains more leucine and induces a more rapid hyperaminoacidemia/hyperleucinemia environment.7

Protein Is Powerful as You Age

So, back to Dad. After a lengthy discussion, he came to the realization that he was certainly not eating enough protein throughout the day. Since then he has made a conscious effort to increase his daily amounts in each feed. As a result, he has felt energetic, with a definite improvement in body composition and a reported improvement in strength. Here are my recommendations:

As always, if you have any health issues, especially renal dysfunction, consult your doctor before increasing your protein intake. To be sure you are on the right track, utilize the services of a certified nutritionist or dietician as first port of call.