Last year I went to SEALFit’s famous Kokoro Camp, and I didn’t complete the event. I had been arrogant in my preparation and believed I could simultaneously train for a Half Ironman race only three weeks later. In my mind the fitness I gained from the race training would have direct carryover to Kokoro.

As it turns out I was wrong. You can hear about exactly what went wrong for me on my recent Breaking Muscle podcast.

The day after Christmas, after going home and licking my wounds for two months, I signed up again for August this year. This proves that the worst thing you can do is leave an idiot alone with too much time on his hands and a credit card.

For Kokoro 2.0 I came up with a new plan based on my failings from last year. This type of needs analysis is the sort of thing I wish more trainers would do with their clients, yet I hardly ever see it. Here’s my report card from last year’s event in my own eyes:

Overall my goal was to get better leg strength, develop more strength endurance to cope with Murph (particularly as it is done under fatigue), and keep building overhead strength and mobility for Log PT.

A Typical Week of Training

I would do 10 x 5 pull ups/10 push ups/15 squats as the main body of the workout. My cardio for the day would be all done on the ski erg to give my legs a break.

At the start, I just picked two full body exercises, but quickly found the two that felt best were power cleans and front squats. I did 10 x 3 of each, alternating between them every set. As I got closer I changed this to an EMOM format to give me some incidental conditioning. I’d cool down with an easy 5km run.

Later in the day I’d do a real run that focused on speed and endurance. This is the Accordion workout found in Run Strong. (And if you’ve read it you’ll also notice the doubling up of runs to minimize possible injuries while maximizing volume).

Wednesday – Full Murph Minus the Running

After Murph I would normally do a 5k row/5k run with a goal time of under 45 minutes. I’d then do another run later in the day that is the treadmill hill workout also found in Run Strong.

After a few hard days of training, this was the day to work on injury prevention. I would do a lot of shoulder prehab, get ups, and extra core work.

I’d do around 200 reps of ab work daily, but on Thursdays it would end up about 400 reps, plus around 15 minutes of holds.

I did a single easy 5km run in the sand in the afternoon.

This time I’d do 15 x 5 pull ups/10 push ups/15 squats. But I’d finish with 3 rounds of IWT (Interval Weight Training is typically 10 reps of a full body exercise followed by a two minute cardio burst). Normally this was 10 x double kettlebell front squats followed by 2 minutes on the Airdyne.

In the afternoon I’d run up to ninety minutes at steady pace.

We have a two-hour class at RPT every Saturday that was the start of my weekend. It’s non-stop strength endurance work for two hours.

In the afternoon, I would go and run ninety minutes in the sand.

With 20kg on the hilliest terrain I could find, for four to six hours.

Later in the day I’d do an easy 8km run.

What’s above was not my final plan. There was more. This was solely to build my strength and endurance base. From six weeks out, all I focused on was conditioning and being able to hold a high heart rate for extended periods. Every workout had at least one three-round IWT in it, if not two. I was doing planks and push ups in a grease-the-groove style all day long. I would often end up with over 400 push ups each day. My goal each week was to perform over 2,000 push ups, a goal I missed only once in the last six weeks.

How I Performed This Time

This time I hit a one-minute lifetime PR for the workout (after already having been working for over eight hours), beating the SEALFit standard by seventeen minutes. That night we walked up a mountain for the entire night carrying packs and stretchers. On the way down we did some bonus stretcher carries and then my crew ran the entire rest of the way down – an 18 mile trip in the middle of the night – and it was no problem.

“If you want to be successful at Kokoro then you need to put in the work. I didn’t speak to anyone who had trained less than six months specifically for this. And the older they were, the more training time they’d put in.”

However, the instructors played an old school BUDS trick on us and turned the heaters way up in the van on the way back. We all promptly fell asleep, which got us burpees for punishment. 350 of them to be exact. And to clarify, these weren’t Spartan race burpees where people just fall on the floor. These were proper military burpees all done to a count, with an exact standard for every portion of the rep. Four people quit at this point, but my fitness base kept me in the game.

Later that day we ran around two miles, rotating on and off a stretcher every few seconds so we could keep the pace up. This run was one of the harder evolutions, done in stinking heat. When we got to the pool we commenced about ninety minutes of non-stop swimming races, then got out and did 450 push ups. Then we ran the two miles back to camp, thankfully without the stretcher. And still my fitness base kept me in it. 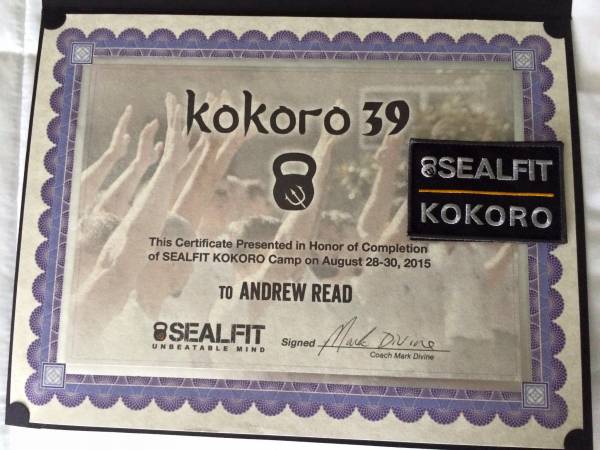 Put in the Work

If you want to be successful at Kokoro then you need to put in the work. I didn’t speak to anyone who had trained less than six months specifically for this. And the older they were, the more training time they’d put in. If you count my preparation both last year and this year, I trained for about twelve months with Kokoro as a priority (roughly six months each time). But this year’s training was far more focused.

I am well aware that the amount of training I was doing borders the ridiculous. I am also well aware that most people don’t have the time. If this is you, Kokoro isn’t for you.

“If you count my preparation both last year and this year, I trained for about twelve months with Kokoro as a priority (roughly six months each time).”

That’s not a judgment – I can tell you from experience that leaving part way through the course is the kind of thing that can keep you awake at night for months. Perhaps attempt a smaller challenge like the 20X events, or an Ironman.

However, for those that do have the time, that outline above was enough to see a moderately physically talented 44-year-old guy make when half the group couldn’t. In the hands of a more talented individual, it’s a plan that will see you crush anything in your sight.