Of all the lessons I’ve learned, there is one that stands far above the rest as the most important: If you don’t aim big, you may as well not bother.

Back when I was finishing high school there was a Saturday afternoon sports show called Wide World of Sports. As an Australian show, it was filled for the most part with stuff I had no interest in like cricket, Aussie Rules, and horse racing. But every now and then something I liked would come on, like World’s Strongest Man and I would sit and watched, transfixed as these behemoths did things I couldn’t even begin to understand.

But nothing affected me like watching Mark Allen and Dave Scott run the Hawaii Ironman. Over the course of a few years I watched as they battled it out on the boiling hot roads of Kona, with Mark Allen seemingly never going to beat the Man. I mean, when your opponent’s nickname is “the Man” what chance do you have?

Step #1: Set Goals That Are Bigger Than Life

But that was in 1989, and it took me until 2013 to complete an Ironman myself, what I now understand was a lifelong dream. Along the way I’ve done all sorts of things I shouldn’t have. Things my body was ill suited to do, and that ultimately left me injured in long-term ways. I pushed my body when my mind wasn’t in it, fuelled by nothing other than spite. One time I pushed myself so hard that my breakdown after the event led to three weeks off work and a loss of 8kg in a single week. Not to mention the twice-a-day doctor visits for shots to keep me out of the hospital. I was so ill that when an ex-girlfriend came to visit me I was so sickly looking she burst into tears at the sight of me.

While I do regret the injuries and the future difficulties I’ve created for myself, I don’t regret for one second what I’ve learned as a result. Of all the lessons I’ve learned, there is one that stands head and shoulders above the rest as the most important:

If you don’t aim big, you may as well not bother.

I’m not one for hyped-up, overly enthusiastic cheering and goal setting. In fact, my clients will tell you that even getting a “well done” from me is like blood from a stone. But if you don’t set big goals for yourself, then you may as well just retire now and wrap yourself in cotton wool.

The rationale is simple. Aim high. Aim so high that failure is a likely result. I believe this teaches you to deal with adversity. I believe it teaches you humility. The reason to aim sky high is that even if you miss, you are still likely to achieve more than you had originally planned.

This creates an interesting problem for many. Firstly, the epic nature of their goal may scare the crap out of them. That’s perfectly fine. When my girlfriend and I set her the goal of a half Ironman a few years ago she had never swum in open water, let alone swum 1.2 miles (1.9 kilometers) and then had to ride or run afterwards. To begin with, she was timid and reluctant to swim. But once she came to grips with how she could improve, which was as simple as looking at the training plan and seeing how far she would be swimming by race day, she started attacking training with gusto.

To get to that bigger goal, we needed some smaller goals, though. These smaller goals helped her wrap her head around the bigger goal even better. She entered a smaller triathlon that had a swim of only 800m in length – less than half what she would need to swim later. She was a bit freaked out by having other swimmers around her, by how dark the water was, and by not being able to see the bottom, which are all common issues for first time competitors. But once she got through it, she realized what she needed to work on, and this made her ability to easily visualize accomplishing the bigger goal.

One of the things that I believe has allowed me to accomplish a lot has always been my acceptance of failure. Don’t get me wrong – I hate to fail. It’s a family thing. I can remember my parents turning up to watch the final of one BJJ tournament, after I’d won seven other matches for the day, only to lose by one point in the final. My mother’s words were, “You should take up golf.” I’m pretty sure she meant I should stop letting people beat me up for fun, but the way it came out sounded like she meant, “You suck. Given you’re so weak perhaps a sissy game like golf is more your speed.”

But if you don’t accept failure as an often-inevitable consequence of big goals, then you’ll always be scared to aim for something truly remarkable. That’s where the humility comes into it. I’m convinced the purpose of social media is so people can brag about various aspects of their lives and make themselves out to be better than they really are or feel. But social media is a double-edged blade. The same technology that allows you to share content with friends instantly allows them to see that you took a long time to get out of the swim in a triathlon or fell back through half the field on the run.

And when those moments happen – and they will, because everyone has a bad day – be man enough to admit you had a bad day. I can’t remember ever being so humbled as I was in the third section of the Ironman run last year. On anything with even the slightest incline I was forced to walk, as I had nothing left to give uphill. My pace nearly doubled and I lost over an hour, blowing my marathon time out to five hours. But thanks to Ironman Tracker everyone in the world could see that, leaving me with only one option – being honest about how hard it was, how underprepared I was, and how stupid it was to try to do an Ironman as your second triathlon. But man did I learn a lot and I had a great day out.

I had a great day because I knew I was doing something I had dreamed about for years. I had a great day because I took a gamble and it paid off. Throughout training, I battled injuries, getting knocked off my bike by an errant granny, and fatigue so bad I literally wished I would get knocked off my bike so it would be all over. But once I was on that Ironman starting line, every single second of misery and doubt leading up to it was worthwhile. 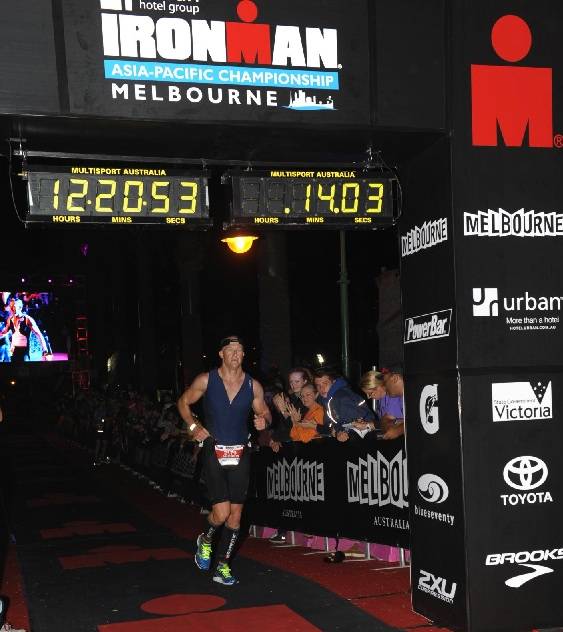 Are You Challenging Yourself?

The year is already nearly a quarter done. Have you made any inroads at all into achieving something amazing this year? Because it’s not too late. Pick something that scares the hell out of you. From RKC or SFG, to a Spartan Beast (or Ultra Beast, if you’re insane), to an Ironman, to SEALFit Kokoro Camp, to ascending mountains. There are hundreds of amazing, scary, worthy challenges out there. Don’t just turn up to the gym each day and tick off another workout. Go use that fitness to do something epic. Even if you fail you’ll have an amazing story to tell for it.