As a Rolfing practitioner (a form of manual therapy), I sometimes feel like the cardiac surgeon who wishes she could instead become a nutritionist and then travel back in time to see her patients twenty years earlier – before they needed the bypass surgery. Although in my case, having a practice where I work mainly with people who are dealing with chronic pain, I wish I could go back in time to teach my clients smart movement interventions to help them avoid suffering down the road. (Though, clearly, I do teach movement interventions with them. All hope is not lost.) It’s staggering just how much of our chronic pain stems from poor movement patterning.

Since movement is a passion of mine, I was delighted to get the fantastic resource Exploring Functional Movement, which is a three-disc set (or download) created in partnership between Erwan Le Corre and Gray Cook. Erwan Le Corre, founder of MovNat, is one of the main people who I believe is a visionary leading the charge back to natural human movement. Gray Cook, founder of Functional Movement Systems and author of Movement, is one of the main people who is taking fitness out of the realm of beating one’s body into submission, and instead is using it to restore mechanically sound movement patterns via screening and correctives. So seeing that they did this project together was basically a chocolate-meets-peanut-butter moment for me. 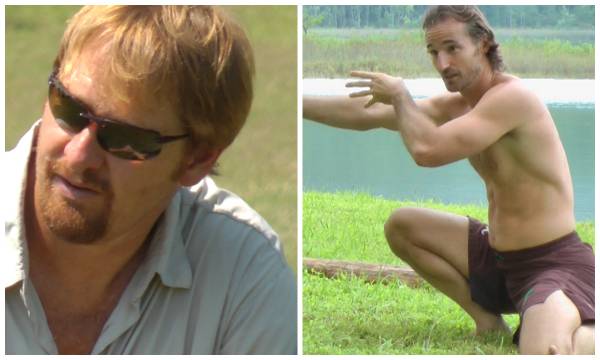 Let’s take a look at what it the series covers. Each of the three discs takes a slightly different approach:

In Disc One, Cook and Le Corre work together as Le Corre takes Cook through some of the MovNat movements. Le Corre points out that humans have a hierarchy of movement skills: locomotive, manipulative, and combative. And he says that in MovNat they always start with locomotive because we need to be able to stand up, run, walk, climb, and perform other basic movements before we progress.

Le Corre and Cook begin their locomotive warm ups on the ground rolling and transferring weight in a number of planes. They do this by rolling onto their side and shifting weight sideways for example, or by crawling on their backs to move backwards, or rolling backwards completely (my new favorite movement from this is rolling backwards on one shoulder until you wind up lying flat in a prone position – it’s an amazing spinal mobilization). They then progress to kneeling, lunging, and transferring weight in more gradually upright positions. 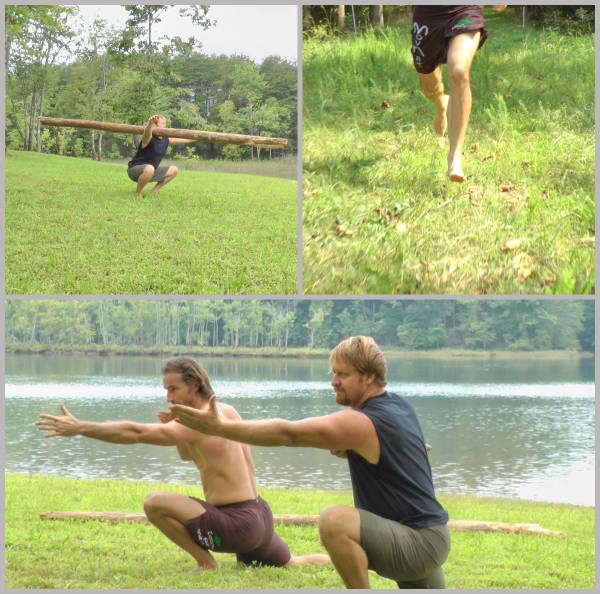 I made the humbling mistake of only watching this first section of Disc One a day before I re-watched it and actually went through the movements. As I watched it initially I found it really interesting, but assumed that I wouldn’t find anything in these movements that would prove challenging or expose a blind spot in my movement abilities. Ba-ha-ha-ha! Not so! While some of the movements came easily, others surprised me with fresh challenges and illuminated discrepancies side-to-side. If you get these DVDs, do be sure not to treat it like watching television. Clear some space and go through the movements. You’re sure to find some surprising insights into your movement patterns.

In the second part of Disc One, Le Corre and Cook progress to some manipulative skills, by using first a stick, and then a log balanced on one shoulder while squatting (and eventually Le Corre kicks it up a notch by walking and running with the balanced log). As Le Corre says, “Manipulating objects does not rely on brute force. We look at postural integrity and good efficient movement patterning… Manipulating objects can be very helpful for feedback.” 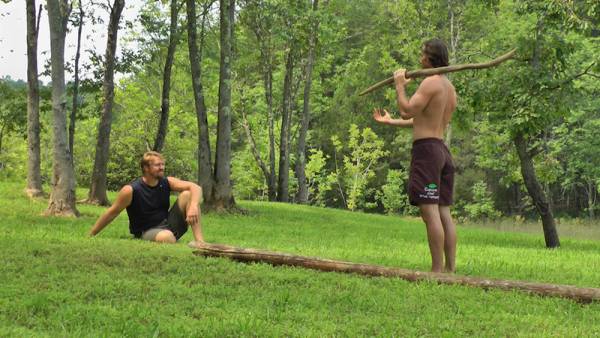 Helpful, indeed. It is clear that this balanced log is the best squatting teacher anyone could hope for. As soon as you lose spinal integrity, whoops! – there goes the log falling forward or backward. Cook summed it up well when he said, “You’re setting up movement opportunities that intensify sensory awareness so much.” So instead of using things like gym weight machines, which profoundly shut down sensory awareness, these movements add a profound mental component. You have to be totally engaged in what you are doing.

Disc Two is an opportunity to watch a thorough coaching session by Le Corre as he takes two people who hadn’t met him before through several of the movements from Disc One, as well as plenty of new ones. You get the benefit of both watching other people go through MovNat and hearing Cook’s commentary on how the movements function as screens and simultaneously as correctives. For example, when Le Corre is having the two students rock back and forth onto their spine with knees bent and no help from their extremities, Cook points out how this movement demonstrates limits of thoracic flexibility. He also explains how, when they are rolling this way, the grass becomes like nature’s foam roller (my words) and gives them some tissue mobilization.

Watching Le Corre and Cook take two people through movement progressions will steep you in their philosophy of quality first. Once quality has been attained, you do not increase volume or intensity, but complexity. As Cook put it, MovNat sets up a circumstance where you just plain “can’t do more than you can do correctly.”

Disc Three basically functions as an encyclopedia of all of the MovNat movements that were covered, with Le Corre demonstrating each. This disc looks at each movement independently and deconstructs their relevance. The MovNat exercises are broken down by type: rolling, crawling, creeping, transitions, and biped. For those of you who utilize the Functional Movement Screen with your clients, this disc also lists the relevant FMS tests that correspond each movement, thereby correlating them directly to the screen.

If I’m pressed to come up with some down side of this educational resource, really all I can come up with is that it was filmed in Virginia in the summertime. The sheer lush, green, sunny, humming insects, summery-ness of the whole thing was a torment as I watched it in the heart of one of New England’s coldest winters. Okay, I kid – I have nothing negative to say. 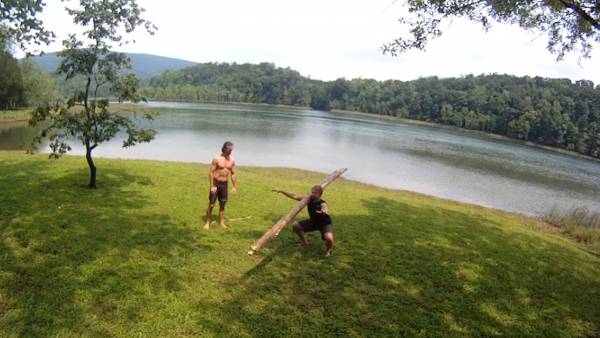 In the words of Le Corre, “What most of us need… is a good healthy dose, if possible a daily dose, of natural human movement to thrive.” For anyone who has an interest natural movement, or who wants to learn how to prevent or treat pain, dysfunction, or injury, Exploring Functional Movement is an invaluable resource.

“Exploring Functional Movement” is available for $49.95 at FunctionalMovement.com.