Rowing Is Here and It’s For Everyone

Rowing has now made it’s way to the forefront of fitness and trust me, it is worth the hype.

“Rowing is here!” exclaimed former world-champion rower Josh Crosby at a workshop I recently attended. For years, Crosby has touted the merits of rowing, predicting, “Rowing is coming.”

Now, Crosby feels rowing has arrived and he’s certainly not alone in this sentiment. From CrossFit to rowing-only classes to HIIT training studios, rowing has made its triumphant entrance to the forefront of sport and fitness.

Rowing is efficient, available to most everyone, and currently enjoying a wave of popularity. Even the hit show House of Cards featured the rowing machine as a frequent guest star. But rowing is hardly a new concept, so why all of the recent hype?

Well, if ever something needed such a boost of confidence and attention, it’s rowing. In an age where technology tends to gain the public’s attention, rowing is an exception to the rule. Rowing is old school. It isn’t easy, glamorous, or even necessarily fun. In fact, it can be flat out tedious, monotonous, and grueling.

“From CrossFit to rowing-only classes to HIIT training studios, rowing has made its triumphant entrance to the forefront of sport and fitness.”

But Crosby is right – rowing is here. Perhaps historically the least popular piece of equipment in the gym has now become the homecoming queen of the fitness club. This is great for those of us who like to get our rowing on, but the question remains, why is rowing all the rage? And what can that tell you about why you might try it?

Because the Sport of Rowing Has Grown

Rowing was once considered an exclusive and elite sport. For the most part, rowing was a male-dominated and upper-class sport. Now, rowing is a booming sport at universities and rowing clubs nationwide. Thanks to title IX, women’s rowing has also exploded. In the 1981-82 season, only 43 NCAA women’s programs offered rowing. Now, 142 do. Boathouses are also now widely available in most major metropolitan areas. 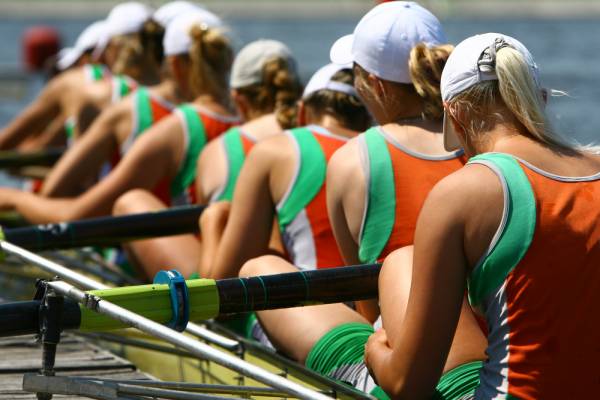 Because Rowing Is for Everyone

Power cleans, hills sprints, and cage fighting are great workouts, but aren’t for the everybody. But rowing is. Rowing is low-impact and fluid, and it isn’t limited by age, gender, or even athleticism. Not many people in their seventies are doing CrossFit or playing football, but many still have the capacity to row.

Because Rowing for Fitness Is as Efficient as It Gets

When performed properly, rowing looks smooth and almost effortless. Don’t be fooled – rowing is hard. Rowing uses 84% of your body’s musculature, far more than most other aerobic exercise modalities.

In addition to using a lot of muscle power, rowing is an efficient calorie burn as well. According to a Harvard study, vigorous rowing burns up to 12.5 calories per minute. In this day and age where time-starved people are increasingly looking for the most efficient means of exercise, rowing is a great option.

“Rowing uses 84% of your body’s musculature, far more than most other aerobic exercise modalities.”

How You Can Get Started and What to Expect

Rowing is likely already available at gyms and fitness studios near you. For the most part, you just need to show up and get started. Unlike rowing on the water, indoor rowing doesn’t require special gear or much physical preparation. Just find a class or a rower at your gym, and give it a whirl.

That said, I highly recommend getting proper instruction – your body, back, and ego will thank you. Here’s how you can get started:

Here’s a tip: Take a video of yourself rowing and compare that with Crosby’s instructional video and see where you need fine tuning.

Yes, Rowing Is For You

Yes, rowing is here. Time will tell if rowing belongs in the fad or trend category, but given its rich history, rowing isn’t going anywhere any time soon. If you’re in the need for an efficient, low impact, monster calorie-crushing workout, look no further than rowing – get your row on today!