What’s up with female endurance athletes getting “skinny fat”? I couldn’t find a single case of a man getting ready for an Ironman who gained weight.

A while ago, on another popular fitness website, Rachel Cosgrove wrote two articles that basically said “steady state cardio training is dumb.” You can read them here and here. But the problem with us humans is that we tend to only look at things in black and white, and never see the shades of grey where the truth really is.

Things We Need to Agree Upon First

Before I get into the meat of this, we need to agree on some things first. Namely, if you’re looking to lose body fat the number one exercise you should be doing is five sets daily of “quit eating crap.”

While it may seem counterintuitive there is ample research to show that exercise can actually make you gain weight. As the body is pushed to expend more calories, it has a built-in control that seeks to maintain homeostasis and tries to convince you to eat more food so that your body remains the same. Burn more calories, eat more calories. The difference in how you look is largely determined by self-control and your ability to withstand being hungry while trying to drop fat.

Second, we need to agree that fitness of any kind is specific. If you want to become better at long distance endurance, then you will definitely need to do longer sessions (such as when preparing for an Ironman or marathon). Conversely, if your goal is something more like a Brazilian jiu jitsu competition, then shorter, higher intensity intervals will be more beneficial to you. The SAID (specific adaptation to imposed demand) principle can’t be beat when it comes to sporting success.

But the thing that really grabs my attention when reading Rachel’s articles is gender based. I spent a lot of time researching for writing this article and couldn’t find a single case of a man getting ready for an Ironman who gained weight. I’ve got plenty of friends who have done one (or more) and we all agree that if you want to get skinny, and you’re a guy, then not much can beat Ironman training.

So what is it about women and distance training that makes them susceptible to gaining weight?

1. Excess cortisol: During ultra-endurance training there are sessions piled on top of one another. During my Ironman preparation, I trained twice a day, every day, for months straight. All that training leads to stress, which triggers the release of cortisol. Add to this that many athletes will use electrolyte solutions to prevent cramping and you’ve got a one-two punch of both hormones and minerals in your body to cause fluid retention.

2. Progesterone depletion: With the high training load, the body uses pregnenolone to create cortisol, instead of using it to produce progesterone. Since progesterone helps in the use of stored fat for energy, this decrease in progesterone production also decreases the body’s ability to tap into its own fat as fuel.

3. Estrogen dominance: Estrogen gets a bad rap from many in the bodybuilding world, as it seemingly opposes testosterone as a primary sex hormone and is largely blamed for formation of fatty tissue. Estrogen is responsible for some good stuff, too, like promoting cell division and growth. But high levels of estrogen can be created by stress, poor sleep, and diet imbalances. And given that cortisol and testosterone operate on a see-saw effect – when one is high the other is low – when testosterone is low and cortisol high, it has a double whammy effect where estrogen becomes relatively greater in relation to testosterone, too. Huge amounts of training, as are common for endurance athletes, magnify all of these factors. 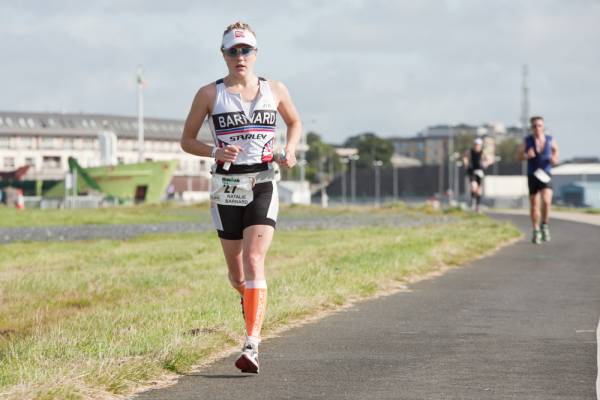 One of the telltale signs of an athlete in the throes of overtraining, which causes this hormonal nosedive, is a constant desire to eat sugary foods. The problem is not helped by simple body chemistry either. Women are simply not designed to perform high-intensity endurance work day after day. But they are superior when it comes to their fat-burning ability. In fact, as distances become longer, the gap between men and women becomes smaller – far smaller than the corresponding gap over shorter distances like 100m.

Women are less able to handle high-intensity work in their training. Couple this with incorrect fuelling and it is easy to see where the main cause is. Training too frequently at too high an intensity causes the release of large amounts of stress hormones, which can lead to weight gain. Training at too high an intensity also makes the body crave sugary foods and it becomes easy to overeat when massively fatigued, and this also leads to weight gain.

There’s also this idea, spawned by Gatorade, that we all need sugar all the time when we train. People easily grab a sugary snack or drink pre-training, often again during training, and then again post-training. The intake of sugary foods is interesting because it also causes us to stay in sugar-burning mode, not fat-burning mode, which is where we should be for endurance activities.

Thus, the combination of high stress, hormone depletion, incorrect fueling, and training at too high an intensity are all equal culprits in this situation.

What to Do If You’re in This Situation

The first step is to control and moderate the amount of intensity in your training. If you understand energy pathways, then you know we essentially have three speeds – high speed/short duration like a sprint, low speed/long duration like a marathon, and the ugly middle ground.

Modern fitness pushes us towards that ugly middle ground far too often. The result is training sessions that burn a large amount of carbohydrates and an underdevelopment of the aerobic system. This focus on only middle intensity training (neither being explosive enough to test our highest intensity abilities, nor low enough to stress our endurance capacities) often leads to the early stages of overtraining and the hormonal difficulties that can occur from high volume training.

To overcome the grip of overtraining, the first step is to reduce training volume by as much as 70% and to completely cease all anaerobic training and competition. These sessions are typified by CrossFit workouts, long track sprint intervals, or other tough, high-intensity type training. This is to be followed by the retraining of the aerobic base, a period which should last three to six months.

Along with ceasing the type of sessions that are continuing to drive you into the ground, you can decrease risk of becoming skinny-fat by increasing the amount of dietary fat you consume. Fat is responsible for steroid and hormone production and can help recover your system after training.

You should also limit how many estrogen-rich foods are in your diet. These include excessive coffee (no more than two cups a day), unfermented sources of soy such as tofu and soymilk, non-organic meats (where estrogen is used to help quickly fatten cattle for slaughter), commercial dairy products, sugar, and starches. This can be helped along by a detoxification process involving two to three cups of green tea daily, a diet high in cruciferous vegetables (broccoli, cauliflower, and cabbage), and getting adequate fiber daily.

If not addressed quickly, the eventual onset of loss of bone density, loss of menstruation, and severe hormonal depletion are accompanied by the eventual complete adrenal fatigue as the body can no longer produce enough cortisol to cope with the stress of training, and the use of stimulants such as caffeine to keep you going.

A better idea for women looking to add a spring to their step is to work on low-rep strength and power through traditional strength training (one to five reps) or the use of plyometrics. Neither of these should end with you collapsed on the floor afterwards, but instead have you feeling fresh and energized. Minimize the use of higher intensity training (WODs and track work) to only once or twice per week, and use the rest of your time to significantly developing the fat-burning aerobic system.

Anaerobic workouts performed for weeks can temporarily build the aerobic system, but at a cost. For a workout to be truly aerobic, you should be able to exercise the same way for many weeks and months with continued benefits. And, when you’re finished each workout, you should feel great – not tired or sore, and certainly not ready to collapse on your couch. Nor should you have cravings for sugar or other carbohydrates – your workout should program your body to burn more fat, not sugar. Burning too much sugar during a workout means it’s anaerobic, using up stored sugar (glycogen). It can even lower blood sugar. The result is that you crave sweets.

Use this as the litmus test for whether you’re in danger of heading down the road to skinny-fat, and the eventual hormone crash of overtraining. Maximize use of aerobic work and low-rep strength work, and minimize the amount of time spent on anaerobic work.