Today, we will dive into the breaststroke and discuss how to master it as quickly as possible. Several aspects of the stroke stand out from the crowd, but as always, establishing the correct body position is paramount to success.

What stands out about the breaststroke is how straightforward it is, and I mean that literally. Where the breaststroke differs from freestyle and backstroke is the utter lack of rotation. The body remains in a flat position throughout the whole movement. This saves newcomers a lot of frustration and allows for a much easier time mastering the core body position.

The primary position for breaststroke is the streamline position: face down, hands extended above the head, and legs extended in a straight line behind. Point the toes as much as possible at the wall behind, and point the fingertips to the wall ahead. The length of the body should ride high in the water to reduce as much drag as possible. You will consistently return to this position, making it the bedrock of the stroke.

“Several aspects of the stroke stand out from the crowd, but as always, establishing the correct body position is paramount to success.”

To practice this position, simply push off the wall and allow yourself to float in the streamline position for several seconds. If necessary, use a pull buoy to help shore up sinky legs. Repeat this several times until you feel confident. Once you have a good feel for balance in the streamline position you can move right on into the kick, which also stands out when compared to other strokes.

There is a good chance that whoever first invented the breaststroke was playing around in the water near some frogs at the time. If I had to guess, I’d say the breaststroke is a direct result of someone mimicking how a frog swims – with wider, sweeping leg motions to power the frog along. In breaststroke, the kick plays a large role in propulsion, requiring more attention to its unique technique.

Unlike the other three strokes where plantar flexion reigns supreme, the breaststroke provides an excuse to let those toes creep up toward the knees. This is great news for those of us who don’t have ankle mobility like Michael Phelps.

“In the breaststroke, the breath is taken with every stroke.”

To begin the kick cycle, the swimmer explodes out of the streamline position by bringing the heels straight up to their butt, allowing the feet to dorsiflex along the way. It is key to remain as narrow as possible as this keeps the legs out of the propulsive stream of water and more to the outside of the body.

Once the heels reach the glutes, the swimmer then extends the legs out and to the side, keeping the feet dorsiflexed until the end of the extension, as if flicking the water with the feet. This allows the feet to act like paddles, pushing the water straight back, much akin to how you use your hands through the pull phase of freestyle.

To develop this unique style of kicking, you can practice with dry land drills that mimic the motion. Alternatively, you can grab a kickboard and focus solely on the kick until you have it perfected. Once you have a good grasp on everything, you can move on to the catch and pull portions of the stroke.

The Catch and Pull

The arm portion of the breaststroke also starts in the streamline position. The arms are extended parallel to the surface of the water with the thumbs touching, little fingers tilted up, and the back of your hands forming the inside edges of a letter V.

From here, the arms sweep to the outside without bending the elbows. Think of lat pull downs where the arms are out in a nice, wide, and powerful position. Sweeping the arms out sets you up for a strong catch and pull. 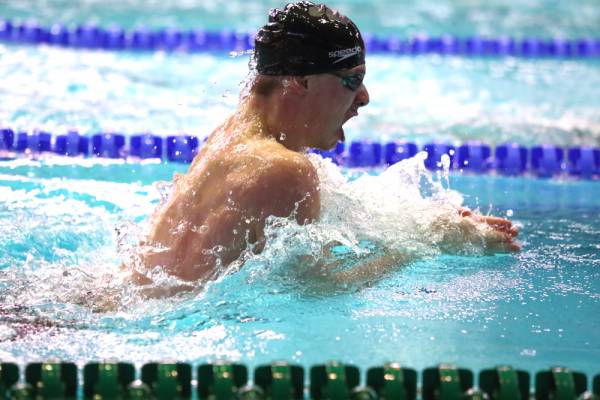 Then, much like in a freestyle catch, the fingertips drop and the elbows bend, powerfully grabbing on to the water. When you begin to pull from this position, pretend you are scooping the water in toward your mouth. This will prevent the hands from traveling too far under the chest, which can disrupt timing and balance. Once your hands reach your mouth it’s time to explosively extend back out into the streamline position. Told you we’d keep coming back to it!

To practice the front half of the breaststroke, you can bring in a pull buoy to provide buoyancy and isolate the arms. This is nice as it also allows you to focus on the mechanics of breathing during the stroke.

The last piece of the puzzle is the breathing. Thankfully, it is pretty simple. In the breaststroke, the breath is taken with every stroke. Just like any other stroke, it is imperative that you exhale while the mouth is underwater.

“When breathing, subtly minimize how much the head comes out of the water.”

To maintain the body position you’ve worked so hard to perfect, focus on keeping your eyes on the bottom of the pool while in the streamline position. When breathing, subtly minimize how much the head comes out of the water. This will allow you to stay as sleek as possible and get the most out of all that propulsion you create.

This may seem overly simple, but practicing the four main aspects of the stroke independently helps greatly when putting it all back together. Start with the body position, work on both aspects of the propulsion (starting with the kick), and then add in the breath – and voila! You’re swimming the breaststroke.

If you read the first part of the series, you now have two more strokes in your arsenal. No excuses! Now, go mix it up in your next swim workout.

Shawn is a coach, endurance athlete, and writer with a (slight) obsession for testing the limits. Initially from a cycling background, Shawn moved into triathlon where the sport and people captured his heart, and lit a fire that eventually kickstarted his fitness career.

Shawn specializes in coaching endurance athletes and works with triathletes, runners, cyclists, and swimmers across the globe through his company Rare Air Fitness.

Helping people transform their lives with fitness and nutrition is Shawn’s other love. He is passionate about helping the everyday person become the best version of themselves. Shawn works with people who want to look, feel, and move better, and offers one-on-one and small group training sessions through his other brand, Shawn Gerber Fitness.

He lives in Wooster, Ohio (which is a great basecamp for all kinds of adventures) and believes the right number of bikes to own is n+1. He has way too many running shoes, is a strong believer in bacon and chocolate and, believe it or not, has never drank coffee.