Take Your Strength to the Next Level With Ipsilateral Crawling

Fascial knots are a common performance inhibitor, but this crawl might be what you need to rediscover your movement potential.

When people are training for optimal power output, they push themselves harder, faster, stronger, and longer. The mission is to kick your ass to be a badass.

But what most often happens is the brain and body hit a breaking point in their ability to recover – leading to a constant state of exhaustion. Instead of optimal power, you get overtraining, fatigue, decreased durability, and most likely injury. Is this sounding familiar at all?

The secret sauce you need is the concept of regress to progress. Back off the training throttle and allow the nervous system to work for you instead of against you. The brilliant strength-training programmer Paul Mcllroy said, “Strength isn’t built. It’s granted by your nervous system.” Take a moment to let that one sink into your brain.

Crawling has many neurological and muscular benefits that can help you rediscover lost movement.

If your nervous system perceives a threat, it will back off the power switch. So, the goal is to expand the comfort zone in training, and your power will naturally increase without extra effort. And what better way to feel more comfortable than to get back down on the ground where we all started moving?

Let’s revisit some fundamental movement patterns. Creeping and crawling are fundamental motions that prime the nervous system to pattern force for the goal of walking. Let’s discover specifically how the crawl relates to one of the most important fascial lines in force production – the ipsilateral functional line.

The Role of Stress in Strength

Stress is actually a good thing in training because it prepares us for high-output response, but too much stress does the exact opposite. The concept of general adaptation syndrome, coined by famed endocrinologist Dr. Hans Seyle, discovered there are three phases to adaptation.1

Taking time to regress movement patterns and expand the training comfort zone is critical for recovery and performance. We can do this with ipsilateral crawling, which will take advantage of the fascial force transmission system of the body allowing for efficient power output in a safe environment, the ground. 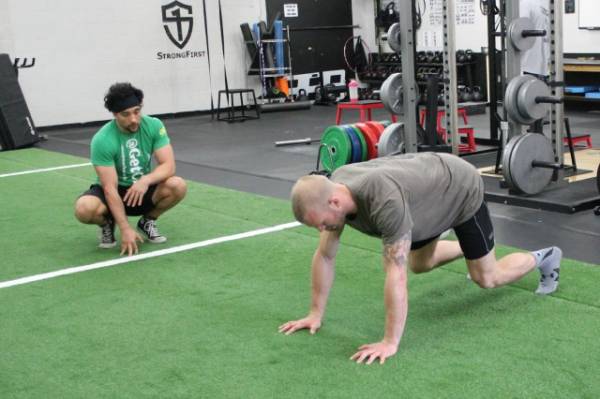 The Ipsilateral Functional Fascial Line and Why It Matters

Taken from the work of Thomas Myers and his groundbreaking book Anatomy Trains, the ipsilateral functional line includes the fascial connection of the ipsilateral latissimus dorso, external oblique, and sartorius muscle:

This line can be felt when supporting the body on the latissimus as on the rings, or on swimming when pulling the hand down through the water in a crawl stroke. Hanging from a chinning bar or a tree branch and twisting the pelvis and legs will also bring this line into awareness.2

You feel this line when standing and bringing the same side knee and elbow together in flexion by your side in the frontal plane. It’s the exact motion of the unilateral creeping position you see baby and kids do while learning to move.

When muscles contract, not only do they move bones, but due to these fascial expansions, they also stretch the deep fascia. Myofascial expansions permit reciprocal feedback between fascia and muscle producing force and tension over a distance. The crawl movement takes advantage of this tensional network.

“Your nervous system with thank you and your competition will be wondering what went wrong with their training. Now go crawl and be a badass.”

To optimize function of this line we want to do a RAIL reset of the muscle pattern. RAIL is the acronym for a system of correction I developed for my workshops. It stands for release, activate, integrate, locomotion.

We are going to release facilitated and overworking muscle and/or fascia, activate the inhibited underworked muscles, and integrate them into a fundamental pattern. Then, we stand and open up full throttle. This system takes advantage of the nervous system comfort zone by increasing movement demand via stages.

Release the latissimus, external oblique, and sartorius (muscle that goes from the anterior superior iliac spine of the pelvis diagonally across the thigh to the inner knee) with foam roller. Be careful with pressure into the sides near the external oblique. You may have to use your hand instead of the roller to release the oblique if they are too tender. Release both sides.

Activate and integrate with the unilateral crawl:

The key is to go slow in the beginning. Do one set chunking style. This means in sections, moving the arm first and then the leg. This is easier for the brain to pattern. Do one set like that on each side.

“Taking time to regress movement patterns and expand the training comfort zone is critical for recovery and performance.”

Locomotion happens when we stand up and bring the same-side knee and elbow together on each side at normal speed for four times total. Then, perform ten skips forward.

Do this reset as a warm-up exercise every time you want to train. Take the time to slow down and visit primal patterns that are inherent to our body’s ability to control motion.

Your nervous system will thank you and your competition will be wondering what went wrong with their training. Now go crawl and be a badass.