The 4 Best Things About Losing a Fight

I don’t claim to have a perfect record in muay Thai. So here’s what I think there is to take from a fight, even if you walk away with a loss.

Dealing with your first loss, it’s thought of as the inevitable (unless you’re Floyd Mayweather Jr., but that is a different story). Whether you believe losing is a possibility for yourself or not, it’s still a good idea to be prepared for overcoming this obstacle in your fighting or athletic career.

I don’t claim to have a perfect record in muay Thai, but I’ve taken fights on short notice against much higher ranked fighters than myself and I still gotten what I wanted out of it. Here’s what I think there is to take from a fight, even if you walk away with a loss.

Ring experience is invaluable, something all fighters strive for, and until recently hard to come by here in the United States unless you were an amateur boxer. I’m particularly lucky as California is a hotbed for muay Thai and kickboxing competitions, but it’s getting better overall here in North America.

The most critical thing you should be asking yourself after your first loss is, “Did I learn something new?” I’ve learned the most in fights where I came away with a draw or loss. Sure, I felt like crud after losing, even suffering bouts of depression because I didn’t know how to cope. But as a result, I’ve gone as far as to take techniques that were used effectively against me and worked them into my own training and class curriculum to better myself as a fighter. You’ll either win – or you’ll learn.

Living to Fight Another Day

Realize that you lost. Even if it’s a bad decision from the judges, you should still treat this the same as if you were knocked out. The bottom line is that at the end of the day, all people will hear is that you lost. But don’t let this bother you. It really won’t matter to you in the long run.

Only you (and perhaps your coaches) know what led up to this point in your career. Not everyone sees the whole picture. Your real friends won’t like you less for having lost, and if they do, it speaks a lot about how you should view those relationships. You will get back to training and you will live to fight another day.

A Review of Your Fight

Having a recording of your fight is essential, as you won’t always remember your whole experience. When you are ready to sit down and watch the fight, try to be as unbiased as possible. Think of yourself as your coach. What would you fix about your fighting style? 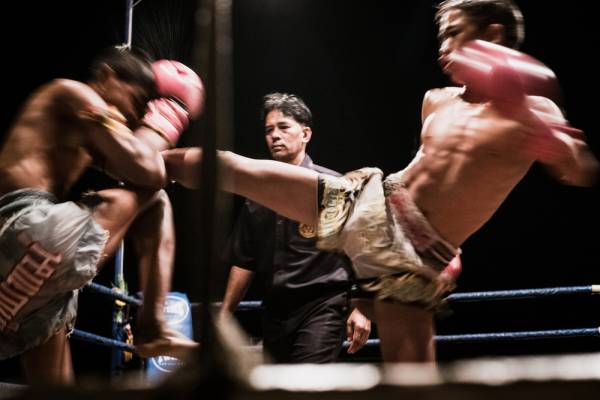 I always try to look for how my balance is at all times, how I’m returning and counter striking. I look at my defense and my position in the ring or cage. These factors will all play into how you fight. Maybe you don’t have access to a boxing ring during training and you found yourself with your back to the ropes too many times during the actual fight. There are many ways to fix that, but footwork would be a good place to start.

Find the holes in your game and ask your coach about what to change. It would be even better if you could sit down with your coach and review the fight together, as he or she will most likely see things that you don’t and vice versa. Reviewing your fight is a vital part of your experience in the ring.

Getting Back on the Train

If you’re not injured in a manner that prevents you from training, then get back to it as soon as possible. Be honest with yourself here. If you have another fight coming up and your knee is a little sore, just work around it. Communicate with your coach about how you are feeling – mentally and physically – as he or she should be able to give you some advice on how to deal with most issues you might encounter.

Worse case scenario, you show up to training and watch everyone train. The habit I see fighters break most after a fight is simply showing up in the gym. I’ve had people who completely disappeared from the gym after their first fight, even if they won!

Don’t let this be you, stay the course and keep that habit going, even if you just stop by to say hello. It makes it easier when you are ready to return and get back on the train.