While strength endurance training is a requirement for strongman competitors, does it have value to Olympic lifters and powerlifters? I would say “yes,” but not for the reason you might consider.

My previous two articles discussed the characteristics of absolute strength and speed strength, or if you prefer the basic characteristics of powerlifting and Olympic weightlifting respectively. In closing out this series, we will now discuss strength endurance. This is the type of strength most commonly used in strongman competitions.

The Strength vs. Endurance Continuum

When speaking of endurance, we are often led to think about cardiovascular endurance. This concerns the ability of the respiratory system to continue operating at an efficient level over long distances or periods of time. We don’t generally think about strength in this situation. Marathon runners have well-developed cardiovascular systems, but they simply do not need a great deal of limit strength. At the extremes of competitive ability, the demands of cardiovascular endurance and limit strength, whether that be absolute or speed strength, are indeed at the opposite poles of the fitness continuum. At championship levels, you must possess all or mostly all one or the other, but not both.

So when we think of strength we’re not generally thinking of any kind of endurance apart from the ability to endure a multi-set workout. Competitive lifters, whether power- or Olympic, are concerned with doing one all-out expenditure of effort. They need a little bit of endurance to get themselves through long workouts, but not an extraordinary amount.

However, when we look at the relatively new sport of strongman we see an entirely different situation.These men are even larger and more muscular than powerlifters and definitely are experts at absolute strength. When you see one of these behemoths you certainly don’t think of the word “endurance.” Your 150-pound marathon runner would literally leave any of these strongmen in the dust. If you asked these two athletes to have a contest to see who could run up and down flights of stairs, the marathon runner would win easily, while surprising no one.

The Reality of Strength Endurance

But let’s alter our contest a little bit. The marathon runner and strongman will still race up and down the flight of stairs, but this time we are going to ask them to carry 150-pound beer kegs up the staircase to store them at the top. Now who has endurance? Sit and think about that and you will easily grasp the concept of strength endurance – the ability to repeatedly exert force on an object over time. There certainly is a strength component present now. The marathon runner has to pick up the keg that weighs about the same as he does, and then he’s got to go up a staircase with it. And after he does that, he has to go back to the bottom and get another one and start all over again. His cardiovascular system may do fine, but his muscular system is going to protest. 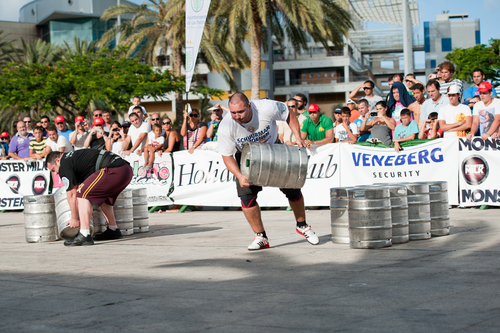 Meanwhile our strongman is still going up and down the stairs. As before, he’s going to get a little bit winded, but the difference is that 150-pound barrel of suds is not going to be that challenging to him. What will probably be more challenging is simply gaining purchase of the keg. No, not footing the bill for nearly twenty gallons of cold amber colored refreshment, but just trying to get a decent hold on the round keg. It certainly easier now that there are handles built in, but a few years ago kegs had no such thing, so it would’ve been even more difficult back then.

After a few trips up the stairs even our strongman is going to be winded a little, but at least he will probably be able to keep going albeit at an ever-slower rate, while our marathon runner will probably have had to give up at a fairly early point. By now you should have the concept of strength endurance down.

It is this concept of strength endurance that leads many to laud this type of training as being an excellent source of “functional” strength. This is because many heavy-lifting jobs in the real world do not require one single all-out effort or even three attempts at the same, but this movement needs to be repeated over the course of an eight-hour workday. (There are those who will say that the ability to fetch heavy beer kegs is a very functional use of strength as far as they are concerned. Try not to be one of those people. You will lose interest in your training!). I will try to stay away from further discussion of the definition of functional strength as that is now somewhat provocative to many but I think my point is well taken.

Look at many of the events in the strongman area. You have to handle inconvenient shaped objects not only once, but over and over again and often at progressively higher weights with each attempt. In those cases often even the first rep is challenging enough. The resistance is often then increased each round and all the while your grip is protesting heavily. If you’ve never experienced this type of activity before, it gives a whole new meaning to the word endurance. 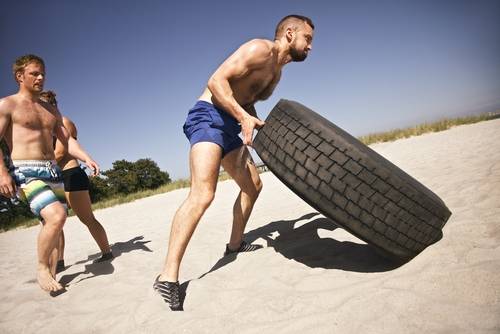 While strength endurance training is certainly a requirement for strongman competitors, does it have any value to Olympic lifters and powerlifters? To that I would venture to say “yes,” but not for the reason you might consider. No, that sort of extreme endurance training is probably not necessary for either of the more traditional weight disciplines, other than the endurance that you would need just to get through heavy workouts every day. But how about using it as an off-season training modality?

Let’s play devil’s advocate a bit here. Let’s say you decide to do some heavy-duty strength endurance work in the off-season, for only a four-week cycle. You may find that such endurance training has a positive effect on your nervous system and your infrastructure, namely your tendons and ligaments. These body parts will have to toughen up in that sort of training regime, and that will have some positive carryover to the more traditional weight sports. It has to.

Naturally, all the usual safety precautions have to be taken before you undertake any strength endurance training. Joint support will be needed, as will sufficient warming up and just good, old-fashioned common sense when dealing with difficult leverages and heavy resistance. If not you can easily have a career-ending injury. This will all probably have a positive effect on your lifting, but I think that this toughening is still not actually the most beneficial result that you can look forward to.

What I think is an even more important reason to do some of this kind of training is for psychological purposes, not primarily physical ones. I suspect that heavy endurance training will be excellent for training your volitional ability. I have to wonder what an endurance cycle will do for you once you resume your regular low-rep training. I would think that after strongman events, your Olympic or even powerlifting attempts would not seem anywhere near so formidable. And as your workout continues, each rep will be completed with much more energy and enthusiasm than before. After all, this feels very light compared to what you were doing in the off-season. In short, strongman-style strength endurance training will toughen you up mentally.

Despite my speculations I have not heard of many Olympic weightlifters who have tried this type of training as an adjunct to their regular quick lifts. It will be interesting to see if somebody ever does try this and finds out what effect it ultimately has. Any takers?

If you missed parts one and two, be sure to read about the characteristics of absolute strength and speed strength.