After watching the 2014 World Weightlifting Championships, I noticed two of the biggest stars of that competition were fit candidates for a compare-and-contrast treatment: Ilya Alexandrovich Ilyin (Gold, men’s 105kg) and Tatiana Yuryevna Kashirina (Gold, women’s 75+kg).

All too often all we in the Anglosphere get are cold facts and not many details or background are provided due to language barriers. Even though I operate under the same handicap, I will attempt to compare these two outstanding athletes.

These two concepts are often confused by the general public. Your nationality is the country of which you are a citizen. On a more practical basis, it consists of the name of the country stamped on your passport. That is fairly straightforward.

Ethnicity is more complex. It can be divided into cultural and racial/genetic components. The latter is easier to identify. More difficult is the concept of cultural ethnicity. An athlete’s cultural identification is often tied up with his or her genetic ethnicity, but with the movement of peoples over the world in recent generations, it is not always so.

Take myself as an example. I am of Scottish ethnic background, but apart from my addiction to oatmeal for breakfast, my too-infrequent attendance at a Presbyterian church, and being a bit close with a dollar, I doubt if many people in Scotland would recognize me as one of them. I’m probably just too Canadian, as my genes have been parked here for a century and a half.

“An athlete’s cultural identification is often tied up with his or her genetic ethnicity, but with the movement of peoples over the world in recent generations, it is not always so.”

This example becomes relevant when looking at the nationality of the lifters I am comparing. Ethnically, they both are Great Russians, the most populous people comprising the European population. But the history of the Russian Empire (whether run by czars or commissars) complicates things. 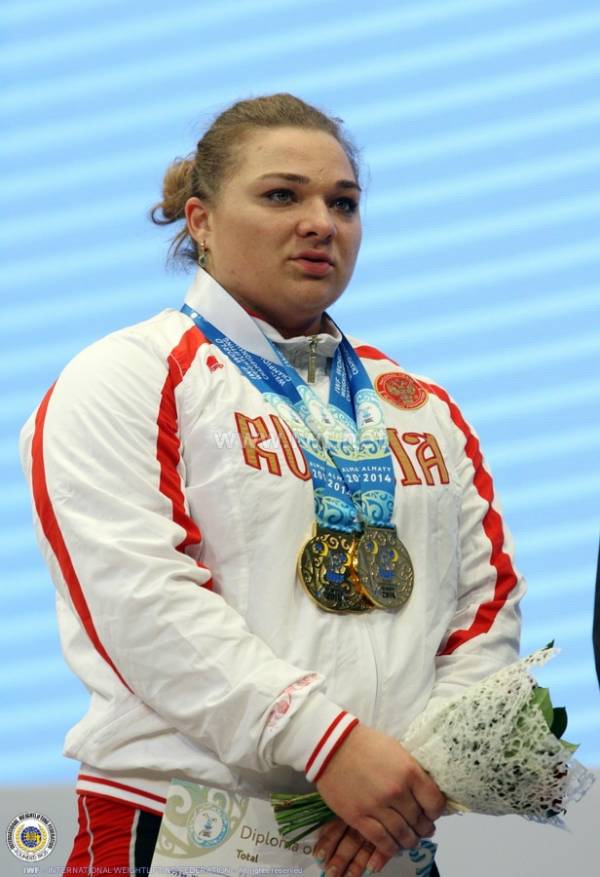 Both are Russian, but from different countries – or at least the countries are different now. Kashirina is a Russian born in Noginsk, a small city just east of Moscow. Ilyin was born and raised in what is now Kazakhstan. This large country was formerly part of the USSR but is now independent. About 25% of its population are ethnic Russians who started moving into this area two centuries ago. When Ilyin’s people moved there is unknown. Although he was a minority in his country, he does belong to the culturally dominant ethnic group at political and technical levels. Whether he feels he is primarily a Russian or if he embraces his Kazakh nationality is unknown.

Looking at their ages, Ilyn was born in 1988, Kashirina in 1991. For those of us who have been around for decades, it is hard to believe these two were toddlers at the start of Bill Clinton’s administration. That seems like yesterday to we old-timers and here are two athletes who have managed to climb to enormous weightlifting heights while we wonder where all that time went.

As for marital status, Ilyin is married to Natalya Kulakova who is also an elite athlete. She is a handball player for the Kazakhstan national team. By handball, we mean the Olympic version not the court sport more familiar in North America. Kashirina is still single, although she is involved in an open relationship (whatever that is).

Their heights are also similar. He is 175cm (5’9″). She is 177 (5’10”). The bodyweights of the two athletes are more or less equal, both hovering around the 105kg level. Both have grown into this level fairly recently and both seem to have prospered there. Despite the basic similarities, their physiques are considerably different. Ilyin is considerably leaner, while Kashirina is a bit softer. This is due to several factors.

Ilyin is now at the top of his weight category and cannot afford to have any greater body fat content. If that happened, he would have to move up to a weight category where the competitors are all much larger. Kashirina, by contrast, is already in her super heavyweight category and will face few penalties for putting on more body weight, at least for now. If she wants to gain muscle, she can, but she will have to put up with a bit of fat, as well. The choice is up to her.

In addition, Kashirina is female and it is well known that women naturally have higher body fat levels. It would be difficult for her to get down to the 75kg category and still lift any decent poundages. It is for this reason that the IWF is considering adding another weight category for women. She is also probably someone who would be naturally bulkier than the trimmer Ilyin. Even so, she is very muscular for any human, women especially.

I have already noted that Ilyin achieved the Triple Crown. In total, he has won four Worlds and two Olympics at three different weight categories. Kashirina has one three Worlds and no Olympics. Both have set junior world records.

READ MORE: An Analysis of Interesting Weightlifting Records and Trends

Both had days that lifters can only dream about. The worst part about making such a performance is that you may never do something like that again. At least normal mortals might never do it again. But I would not bet that with these lifters.

On a percentage level, they are snatching around 80% of what they clean and jerk, pretty much standard for this era. That same figure also shows up when you compare the performances of the two athletes. Her total is about 80% of his. This is fantastic lifting when you consider that the average women’s world records nowadays are about 75% of those for men.

“Both had days that lifters can only dream about. The worst part about making such a performance is that you may never do something like that again. At least normal mortals might never do it again. But I would not bet that with these lifters.”

These two athletes do differ in the amount of competition they face. Ilyin has any number of athletes barking at his heels. He cannot slack if he wants to win more world titles, which he may well do as he is still young and has lots of potential. If he continues to compete, he will have to lift near world-record performances to be assured of stepping on that middle podium.

Kashirina is in a different situation. She had an easier time of things this year due to the fact her archrival Lulu Zhou of China did not compete for whatever reason. A healthy Zhou will give Kashirina problems, as she is much heavier than Kashirina and even stronger. Kashirina is capable of matching Zhou, but she will have to set world records in order to do so. Apart from Zhou, Kashirina does not have a lot of other competition at present. The women’s superheavy category drops off considerably when we get to the bronze medal level.

RELATED: 10 Myths About Olympic Weightlifting That Need to Stop

When I look back in history, the level of Kashirina’s performance really stands out. Back in the mid-1950s, Paul Anderson and Norbert Schemansky were winning world titles with roughly the same weights that Kashirina is now lifting. No one back then would’ve dreamed that any woman could match these weights. Hell, they never dreamed that many other men might match them.

Each athlete appears to have the potential for a great future in the sport. Both are young enough to continue to improve. They have the similarities and they have the differences. This only goes to show that weightlifting champions can be developed in a variety of backgrounds.

All photos courtesy of the IWF.