High-intensity training provides the foundation for many modern training programs, but often what is done in research is not translated to practice. For example, the original research on Tabata workouts, a common form of high-intensity training, is often bastardized. A true Tabata session is only 4 minutes of work, but often I see 10-30 minute versions. More is not more in this case. You do not get the same effects from going longer. After a true, 4-minute Tabata session, you should have nothing left in the tank.

Your coach may feel that four minutes is not enough work. But science does not care about your coach’s feelings, nor do I. I care about results.

Understanding how this program works will keep you from being tempted to change it based on how you feel, and that is imperative for success. The goal of the program is to avoid the burn, which many have come to crave and is often associated with hard work. This program allows you to work efficiently without going deep into the pain cave to achieve even greater results.

The three main energy systems described below are divided based on how they create fuel. You engage all three during training, but you use more or less of specific systems through different activities. Read this primer on the energy systems for additional information.

This is your turbo system that supplies quick, intense bursts of energy. It also runs out quickly. You primarily tap into this system during sprints or heavy lifting. It is also referred to as the anaerobic (without oxygen) system. Without getting too heavy into the mechanics of this system, it relies on your storage of creatine phosphate. Mitochondria turns the creatine into fuel. Taking creatine as a supplement helps this system, but your body can only store so much. The program below will make this system as efficient as possible so you can lift heavier weights.

This is the in-between system; both anaerobic and aerobic. It turns on if you try to sprint for as long as possible, do more than 15 reps of an exercise, or complete a 20-minute high-intensity workout. This is where you feel that addictive burn and that makes you feel like you have “worked out.”

Our goal with this program is to train the body, not to “work it out.”

New athletes often see impressive fat-loss results when starting a program that relies on the glycolytic system. Eventually, the stress response causes the body to break down. The neuroendocrine system kicks in during stress and utilizes our resources, a response that comes at a cost your body. Over time, this stress can cause damage to mitochondria. This is a bad thing, since you want more mitochondria to facilitate the development of fuel.

Additionally, this system relies on glucose to create creatine phosphate molecules. You want your body to learn to burn fat for fuel. High intensity programs can lead to cycles where you crave sugar as your body is using so much of it for energy. For this reason, the glycolytic system will be avoided in the program outlined below.

Elite athletes seem to spend a lot of time doing glycolytic training, but at their level, the work is mostly aerobic. They utilize glycolytic work sparingly.

For the rest of us, it can be hard to move away from glycolytic training. First, people become addicted to the feeling of satisfaction after completing a hard workout. Second, the initial success in fat loss often leads people to want to do more glycolytic work. This is why it’s important to understand the science behind the program. You cannot listen to the post-workout high or the initial fat loss because over time, too much glycolytic work will break down your body.

This is the long-term system that relies primarily on fat sources for fuel. It is highly efficient, but low in power. The program below will utilize this system to burn fat, build peak endurance, and rely less on the glycolytic system during competition.

Phil Maffetone has trained many elite athletes by building a strong aerobic system. The off-season is the time to build an aerobic base where no training in the glycolytic zone is allowed. The key here is to avoid going into the glycolytic zone as it triggers a stress response. Peter Park trained Lance Armstrong in this manner during his peak years.

The simplest method to know if you’ve entered the glycolytic system is to use the “talk test.” If you can keep a conversation during a workout, then you are probably in the aerobic zone. If not, you’re probably in your glycolytic zone. Maffetone’s “180 Rule” is a simple method to use to know if you’re training in the right zone. The maximum heart rate you want to achieve to stay in the aerobic zone is 180 minus your age. 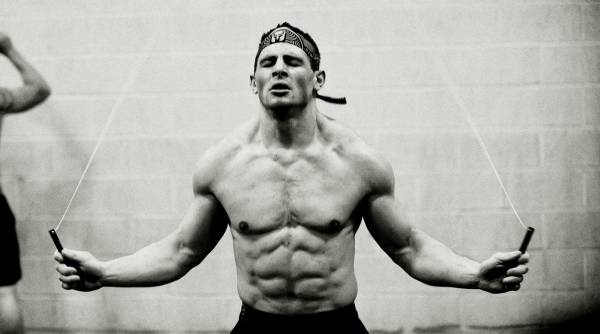 The goal of conditioning is to increase your body’s efficiency to the point where work that was glycolytic becomes aerobic.

Pavel Tsatsouline and I have conducted research using these types of conditioning programs. Our pilot study improved strength, endurance, and body composition among CrossFit athletes.

Al Ciampa, working with Pavel Tsatsouline, has called this program the A+A (Alactic + Aerobic). It uses the two outside energy systems and avoids the middle glycolytic system. The goal is to harness the fat burning aerobic system to replenish the quick alactic system. This program does not rely on hour-long treadmill sessions. Rather, you will train your body to use the alactic system, back off before you get too glycolytic, and then let the aerobic system replenish your creatine phosphate stores. Basically, you push to the edge of discomfort and then retreat to fight again later.

Conditioning will require only one exercise: the kettlebell swing. If you don’t have a kettlebell, you can adapt this program to running stairs, sprinting, or jumping rope. I like the kettlebell swing as it builds explosive lower-body power. The basic concept is to do rounds of 15 seconds of work followed by 45 seconds of rest. If you are sprinting, you would sprint at 85% effort for 15 seconds and then rest for 45 seconds.

You repeat a round every minute on the minute. When you begin the program you will do ten rounds (ten minutes). It should feel easy. Don’t be tempted to do more. You want to allow the alactic system to go at full speed and then let the aerobic system refill your creatine phosphate stores. You will not feel the burn and you will not collapse to the ground after this type of training. If you do, then you did it incorrectly.

Here is the format for the program: 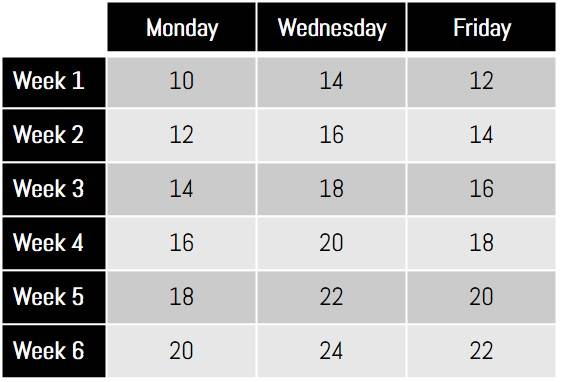 Tips for the Swing

Hinge, don’t squat: The swing is a simple exercise that is done wrong in so many popular media sources. It is not a squat movement, rather it is a hip-hinge movement. That means that the hips go back (hinge), and the knees only bend slightly (they bend fully in a squat). Think about this position as a jump. If you try to jump as high as you can, the bottom position is the same position that you use at the bottom of the kettlebell swing.

Be explosive with the hips, not the arms: The swing is a ballistic movement. If you think of a bullet fired out of a gun, it receives all of its power initially and then relies on momentum to get to its destination. The same goes for the swing. The hips provide the explosive power throwing the kettlebell up in the air and the arms are there just for the ride. Do not worry about how high the kettlebell goes. Your goal is to let it float up once the hips have used up their power.

Protect the back: Do not let the kettlebell pull the lower back into a bad position at the bottom of the swing. Pull your shoulders back and down to engage your lats. I like to approach the kettlebell like a gorilla with my arms out. By keeping my upper back tight, I provide more protection to my lower back.

Also, ensure the kettlebell passes between your legs on your upper thighs. As Dave Whitley says, it is like playing chicken with your man or lady parts. Wait until the last second to hinge back and let the kettlebell go between your upper thighs. If you find your forearms hitting your lower thighs, you are putting too much strain on the lower back.

Use the Right Weight: If you are proficient with your swing, a heavier weight will use up more of your alactic system. 24kg (53lb) for men and 16kg (35lb) for women will work fine for most people. Extremely strong men can use a 32kg bell (70lb) and extremely strong women can use a 20kg bell (44lb). Adjust the weight according to your experience and proficiency with the kettlebell and your heart rate. If you do not feel comfortable with swings, short sprints and stair climbing might be a better alternative.

Fat Loss and Endurance With No Treadmills

Follow this program for at least six weeks, and you will lose fat and increase your endurance. Test yourself after 6 weeks by doing a high-intensity style workout or endurance event. Do not do any high-intensity training during the program as it will reduce your results. It is important to continue strength training in this cycle, but do not go into the glycolytic zone.

Resist the urge to push a bit more. The program may not feel challenging, but it is optimizing your energy systems for maximum fat loss and muscle gain. If you feel like you are bored or this program is too easy, then you are probably doing it correctly. Give it a few weeks for greater fat loss, endurance, and strength.

More on Conditioning and Kettlebells: