People get sloppy when they get tired. Across a wide variety of sports, past studies have shown that fatigue degrades balance and body awareness. Yet fatigue is a necessary part of athletic training. Almost all training programs depend on some form of overload, pushing the athlete to do more, lift heavier weights, move faster. Coaches therefore face a challenge: providing a heavy enough workload to drive improved performance, but not allowing fatigue to reach a point where injury risks become unacceptable.

The increasing popularity of high-intensity exercise protocols among recreational athletes exacerbates the situation. On one hand, high-intensity protocols are appealing because they promise substantial benefits with relatively short workouts. On the other hand, recreational athletes unfamiliar with high intensity training may not be prepared to accept the risks of injury or severe soreness that such protocols can bring. It’s up to the coach to find an intelligent balance.

Against this background, the study discussed in this article seeks to evaluate the impact of fatigue induced by resistance exercise. In many resistance exercises, poor form can lead directly to serious injury. There is some evidence that fatigue causes form to degrade to a degree that might be dangerous. For example, in a box lifting test, fatigued subjects reverted to a stooped, rounded-back lifting technique, instead of the preferred squat-style technique.2 In the present study, researchers at the University of Connecticut’s Human Performance Laboratory sought to further quantify the effects of fatigue induced by three standard, whole-body exercises: the squat, bench press, and deadlift.

The test subjects – college-age males with previous resistance training experience – were first asked to determine their one rep max for each of the three exercises. The squat and deadlift tests were performed in separate sessions, two days apart. At least three days after the deadlift test, the subjects were asked to perform a fatigue-inducing workout consisting of descending sets of 10, 9, 8, … 3, 2, and 1 repetitions of each of the three exercises. For each exercise, weight was set at 75% of the subject’s one rep max. The workouts were not timed, but subjects were asked to perform the workout as quickly as possible. If the subject was unable to continue at the assigned weight, weight was reduced by 5% of one rep max and the workout continued. (CrossFitters may notice a resemblance between this workout and the beloved “Linda” benchmark, which consists of descending sets of deadlifts, bench presses, and cleans and is colloquially known as “Three Bars of Death.”) 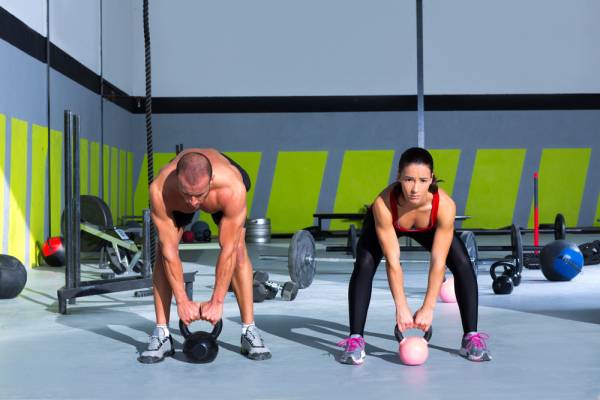 The subjects reported a mean rate of perceived exertion (RPE) for this workout of 7.61 on a 10-point scale. Blood tests showed that they developed mean lactic acid concentrations of 14.21 mmol per liter. Other studies have shown that trained athletes can tolerate even higher lactic acid concentrations. Coaches therefore need to remember that trained athletes can tolerate very high levels of discomfort; the athlete may not be the best judge of whether it is safe to continue.

Finally, the athletes performed five unweighted “air” squats both before and after the fatigue workout. Electromagnetic sensors were used to determine the amount and rate of knee flexion, hip flexion, trunk flexion, hip rotation, and hip adduction. Even though participants were asked to maintain the same form throughout, the post-fatigue test found measurably less knee and hip flexion and hip adduction, as well as lower rates of flexion and adduction. Trunk movement was unchanged, although the authors noted that unweighted squats place relatively few demands on the trunk stabilizer muscles. Overall, fatigued movements were more abbreviated and less efficient. In particular, as the hamstrings and glutes tired, fatigued subjects became more reliant on the hip adductors to pull them out of the squat position.

The authors noted that poor proprioception and movement efficiency when fatigued would be especially likely to contribute to injury in explosive, complex movements. Many common exercises fall into this category, but those – like the Olympic lifts – that require a high degree of coordination while also controlling substantial weights would seem to require particular care. Coaches, the authors advised, should pay close attention to technique and quality of movement as athletes tire.