As a runner and a coach I’ve found there are a few key components that are crucial to being a successful runner. Running is very simple, is as natural as breathing, and everyone is capable of doing it. But when you look at running from a competitive aspect or in terms of optimal performance the first thing we must address is pace. The longer you intend to go the more important it is to know your pace. Running the correct pace can be the difference between running a personal record or falling short of your goal every time.

Often I speak to athletes about their races and their goal times they wished to achieve, but when I ask them about their pace strategy they have none. Having a time goal with no pacing strategy will almost always set you up for failure. That’s not to say that with no pace plan you won’t get lucky; even a blind squirrel finds a nut every once in a while. But why take the risk of putting in all that effort training and then on race day go out and wing it? Think about this, almost all distance national and world records are set by athletes running even pace or negative split (running faster at the end then in the beginning) pace for their race.

Let’s take the 5K distance, for example. If your goal is to break 19:00 for the first time, what should your pace be? To run 18:59 you would need to average 6:07 per mile. Unfortunately in a race setting most inexperienced runners will let the race dictate their pace and inevitably run their opening mile substantially faster then their desired goal pace. By allowing the race to dictate your pace you will run at a much faster pace. Our competitiveness gets the best of us and we run at a pace that exceeds what we are capable of sustaining. Although we can sustain that fast early pace for a short time, the effort quickly becomes a grueling death march and by the time we get to the finish line our pace has slowed far beyond that of our goal time.

Once you have set your time goal, figure out the average pace per mile needed to reach your goal. If your goal pace is to average 6:07 miles for 5km, there is no need to run your first mile in 5:52. Fifteen seconds when you’re fresh might not seem like much, but it can have a huge detrimental impact on your race. It would be more beneficial to run a 6:15 opening mile and close at 5:52, rather then vice versa. Even though running 5:52, 6:07, and 6:22 will generate the same time as 6:22, 6:07, and 5:52, the negative split athlete will have a much more positive experience and will have a greater sense of satisfaction and accomplishment from the performance.

In order to achieve success as a runner and reach your full potential we must pay close to our pace goals and have a plan on how you are going to reach your goals long before you toe the starting line. Pacing is something that can and should be practiced in training. Every interval session and tempo run should have a specific pacing plan for you to stick to.

I recently worked with an athlete who had a goal of breaking three hours in the marathon. He had previously tried to do this seven times, only to come up short in each attempt. When I examined his training logs it was evident that he wasn’t paying attention to his pace when he trained or raced. He was obviously fit enough, but he always started out much faster than needed. Each interval in training and every mile racing would be slower then the previous. After seeing this I told him he would have no trouble breaking three hours. From that point, every training session I programmed for him I gave him specific time goals to hit for each interval. I had him focus on running negative splits when he did his interval training and tempo runs finishing much faster than the pace he started at. 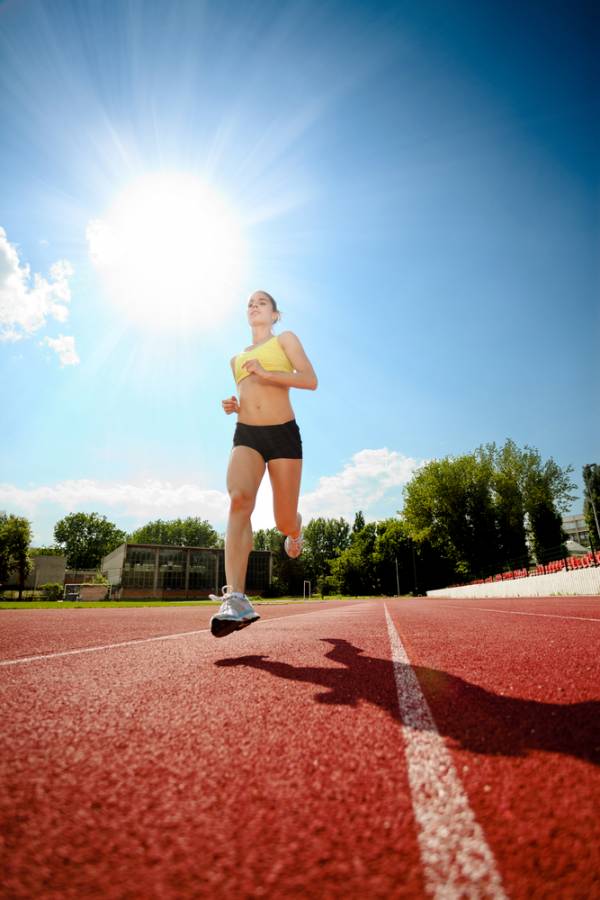 During his build-up in the months leading up to his marathon he raced a 5K, 10K, and a half-marathon. For each race I gave him specific times to run for each mile. Before his 5K he doubted the strategy because the early split times were slower than what he was used to running in previous races. I convinced him to trust the plan and to give it a try, and sure enough he ran his fastest 5K ever. By controlling his pace early on he was able to finish faster and ended up with a one minute PR.

When it came time to race the 10K and the half-marathon, I gave him similar strategies with similar results. Over the 10km distance he set a new personal record by two minutes and in the half-marathon he bested his previous PR by six minutes. By the time the full marathon rolled around he had practiced proper pacing and was ready to roll. When he bested his personal record by eight minutes and broke three hours it was no surprise at all.

Over the years I have found that the track is the best place to practice pacing. It’s on the track where you can pace your splits every 100 meters and every 400 meters. As you get better at pacing on the track you can begin to extend the length of your intervals and even venture away from the track.

Proper pacing takes practice. It requires patience and self-control, especially in race settings. It’s very easy to get caught up in the excitement and let the race dictate your pace. Know your pace heading into the race and stick to it, regardless of how fast the race leaders take out the pace. Remember there’s no prize for who gets to the first mile in the lead, just the finish line.

Rich Airey is a running and strength coach hailing from the Point Pleasant, New Jersey. Rich got his start as a runner at the age of five, running his first five-mile race. As a junior college All-American, Rich earned a scholarship to Monmouth University, where he was the school record holder in the 10,000m and the Northeast Conference Steeplechase Champion. Upon graduation Rich continued to compete in races of all distances from one mile to 24-hour ultra marathons.

Since 1998 Rich has been coaching runners of all levels. He has coached and worked with over thirty high school All-Americans, NCAA qualifiers, and Olympic Trials qualifiers. As a running coach Rich has always incorporated strength training with his athletes.

Rich is a CrossFit Level 1 coach and has coached at several gyms around the United States. Rich is also a USAW Level 1 Coach. In addition, Rich travels the country teaching running seminars, lecturing on mechanics and the importance of strength training for healthy running and longevity.