The killer app is that one application you can get from a piece of equipment that you can’t get anywhere else. Don’t waste your time doing things that for which that tool is not designed.

One of the things that annoys me the most is watching people use tools poorly. We’ve all got friends who seem to be all thumbs and will suddenly just start trying to hit a nail into place with a screwdriver. Growing up, that sort of behavior didn’t go down well at my house. Every tool had a purpose, and we had all the tools you could ever need for any purpose imaginable.

Recently I was working out with a friend, a guy called Dan John, you may have heard of him? And we were speaking about this exact thing – people using the wrong tool for the job – and he came out with a great expression for it. The killer app.

Dan’s story started with a brief history of Excel. A guy made a spreadsheet program, basically just fooling around, and showed it to an accountant, asking if he may have any interest in it. The accountant explained he had an entire building full of people employed to do what that one little program could do in seconds.

In exercise, the killer app is that one application you can get from a piece of equipment that you can’t get anywhere else. For instance, kettlebells are best for the HKC movements of swing (and other repetitive ballistics such as snatches, cleans, and jerks), get up, and squat. The barbell is great for maximal strength exercises such as deadlift, bench press, and squat. TRX is great for upper back work such as rows and other Y and T variations for shoulder health.

If there’s a piece of equipment that doesn’t have a killer app then you don’t need it. It’s that simple. I speak to many people about outfitting gyms – whether it be their home gym or a massive commercial facility. A lot of people still operate on what I call the Noah’s Ark Principle – just get two of everything and pray that it’ll be all right. But for those of us who have a limited budget it makes purchasing choices much easier if you begin to realize that a majority of the equipment sold in the fitness industry has no killer app. I’m going to infuriate some people but the BOSU, for example, has no killer app. Every single thing you can do on a BOSU can be done an another piece of equipment. So save your cash and don’t buy it. (Besides, those things are ridiculous).

One of the most popular, yet inane questions I seem to get is when people ask me which exercise I would pick if I could only do one. Because apparently, in this scenario, somehow all the equipment has been sucked out of my gym and I’ve lost my memory too. But instead of imagining that I’ve lost most of the contents of my gym and my mind, we should try flipping this around a little. Instead, imagine we can only use equipment for its killer app and see what kind of program we get.

In my gym I have bars, kettlebells, pull up bars, rowers, Airdynes, and a lot of open space. 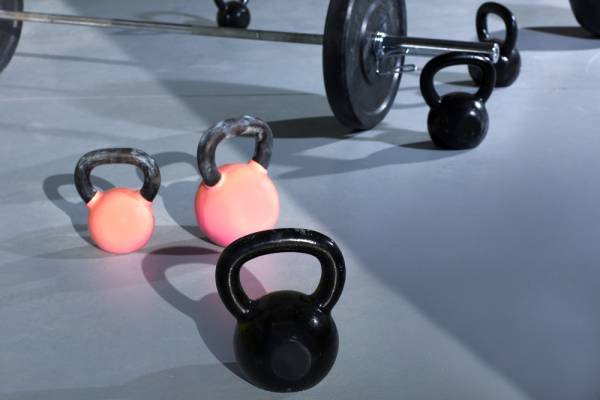 Because we have space, and the best thing about space is moving around in it, the warm up is going to be get ups combined with overhead carries using the kettlebells. I’ll start from the ground as usual, but at the top of each rep walk to the other end of the room with the bell locked out overhead before finishing the rep. I’d pair these up with pull ups. A get up/walk on each arm followed by a set of as many pull ups as I could do. Doing this for five rounds would get my body well and truly warmed up.

I’d move on from there to some barbell work. And because I like to work in non-opposing supersets (a pair of exercises that don’t conflict with each other), I’d go for deadlifts and overhead pressing. I would choose bench press but we don’t own the equipment for that, because other than bench press there’s nothing you need a bench for that can’t be done from the floor or standing. So, five sets of five of both deadlift and overhead press and I’d be done.

One of the things I’ve noticed most about kettlebell swings is that when I do them after I deadlift my body feels much better later on. So, I’d round out the strength work with five sets of swings. 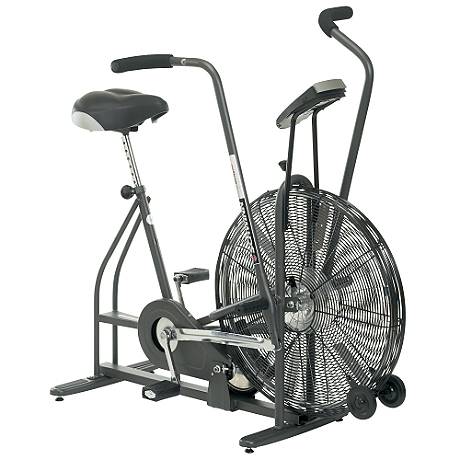 To finish, I’d have to go with my least favorite toy – the Airdyne. If you’ve not used one don’t be fooled by their ungainly appearance. Just like the ugly duckling that turns into a swan that can nip you somewhere tender, these things can bite. Because of the way they’re made, the only way to use these things in the way their killer app is satisfied is by using them for all out sprints. A simple interval session would suffice – maybe four rounds of thirty seconds all out followed by thirty seconds recovery.

And I’d be done at this point. To summarize, we can double check that I am using my equipment for the right purposes. Can I do get ups with a barbell? Yes, but they never feel as balanced as they do as with a kettlebell. Could I swing a barbell? Probably, but most likely only the one time. So, my kettlebell choices are good. Can I deadlift kettlebells? Well, yes, but just like trying to do get ups with a barbell they never really feel right. Overhead pressing is contentious as both barbells and kettlebells work well here; however, if I’m looking for max strength training my concern is how much weight can I use, and when it comes to load the barbell is king. Finally, the Airdyne is ill-suited to longer efforts, its strength comes in destroying you quickly.

One of the secrets to training is to stick to the Killer Apps for each tool. There’s no need to limit yourself to a single tool, but don’t waste your time doing things that for which that tool is not designed. Like long-distance riding on the Airdyne or trying to do repetitive lifts with a barbell, these things just don’t work. Use the tool for the right purpose and you’ll get far better return from your training.