Did you know that humans are the only ones who land on their heels when they run? While most animals (felines, canines) move around primarily on the balls of their feet, we humans land on our heels and transition forward to push off the balls of our feet. According to a doctoral student from the University of Arizona’s School of Anthropology, we do this because it gives us longer virtual legs.

Moving around on the balls of your feet tends to make your legs longer, and dropping the heels to the ground shortens the legs. However, we move the way we do (heel first) because of the pendulum effect. Our feet are the stationary pivot, and our bodies swing up and over. Imagine an inverted pendulum, and you have an idea of the way the human body moves when we run.

As we step—transitioning from heel to mid-foot to the ball of our feet—our bodies are swinging forward. By the time we push off from the ball of our feet, we’re six-ten inches farther forward than we were when we placed our heel. This virtual leg extension makes us move faster than we would if we simply ran on the balls of our feet. With every step forward, you get a few additional inches of ground space. Mechanically speaking, it’s the same as having a longer leg.

To prove the point, a pair of University of Arizona researchers compared the pace of toe-first walkers with normal walkers. People who stepped toe-first ended up moving more slowly and had to work up to 10% harder than those who stepped normally (heel-first). The conventional walkers moved as if their legs were 15 centimeters longer than they really were.

When put on a treadmill, those who ran toe-first also ran at lower speeds than those who ran using the conventional technique. For the human body, the heel-first stride is the most effective way to run. 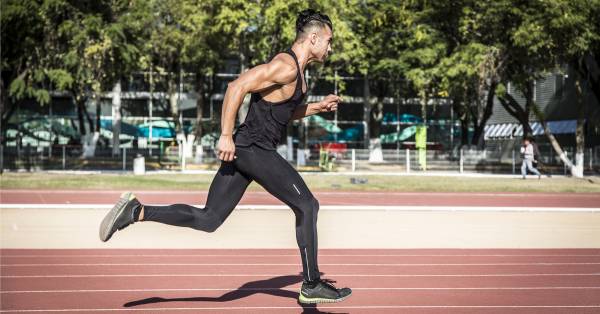 Barefoot runners often emphasize the natural stride that comes from running with little or no cushioning between the foot and ground. However, they tend to be toe-first runners, which means they have to work harder and tend to run slower. The modern human has adapted to move heel-first in order to extend the virtual length of their limbs and move more quickly with less effort. Accepting this and running in shoes that cushion the impact on the heel may lead to more efficient running.