Whether you’re protecting the streets of Compton or an affluent community in Beverly Hills, as a police officer one thing is certain: shit can hit the fan. While the frequency and the severity of crimes from district to district is undoubtedly different, when the “oh shit” meter reaches full effect, you better be ready. The physical requirements for police officers are different in each state, but every one of them will assess if you have what it takes to do this job.

Here’s a video from one police department as an example:

The Physical Qualification Test (PQT) or Physical Ability Test (PAT) consists of various tests and is meant to weed out the weak out. Here are some of the more common tests you’ll run into:

This test will mimic the demands of a foot pursuit. You could be presented with some punk kid who just stole a woman’s purse or a perp who fled his vehicle after being cornered. Either way, you better be fast, agile, and ready to do an all out sprint, which is exactly what this test evaluates.

The pursuit run starts once the proctor yells, “Go!” You will then run straight ahead, weave around a cone, sprint to the next cone, and weave again until you complete the 75-yard run. There will be four or five barriers throughout the course that you have to step over and not hit during your pursuit.

This push up test is used to assess muscular endurance and strength in your upper body. Good upper body strength is a must for wrestling perpetrators down to the ground once you finally catch them after your foot pursuit.

The test is started in standard pushup position with your hands shoulder-width apart and your feet eight to twelve inches apart. While keeping your core tight and maintaining straight alignment from the back of your head to the heels of your feet, lower yourself down to the floor then push back up to the starting position.

You have two minutes to complete as many pushups as possible, and only proper ones are counted. 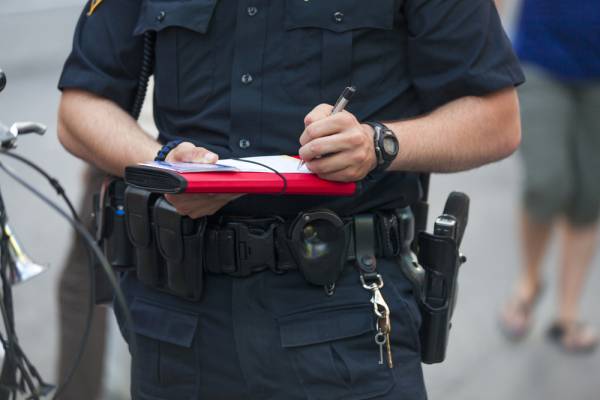 This test is used to evaluate your core strength. While there are obvious physical demands of become a police officer, there is also a lot of downtime spent sitting. Your hamstrings and hip flexors will tighten up from sitting, and then be challenged by long bouts of standing around with your heavy duty-belt on. All of these issues multiplied by 25 years on the job equals guaranteed back issues to accompany your pension. While this test is not assessing long-term back health on the job, it does adequately assess your baseline core endurance.

The test starts off with you lying on your back with your knees flexed at a 45- to sixty-degree angle, feet together, and fingers interlocked behind your head. On the “go” command, you perform a sit up where your elbows touch your thighs. After making contact with your thighs lower yourself down until your back touches the ground.

You have two minutes to complete as many sit ups as possible, and only proper ones are counted.

While it will be rare that you run a mile and a half during your shift, this test will serve to assess your aerobic capacity. At first glance the test does not seem too difficult, but remember that this is a minimum requirement to become a police officer. As I mentioned, the weak will be quickly be weeded out with these tests and the strong will move onto the next phase.

An applicant must obtain one point on each of these four tests. If a person obtains a zero on any of the four tests, he or she will fail the test regardless of the scores on the other tests. If you are training for the police department in your area, make sure you look up the specific tests and the required scores you will need to accomplish.

After completing these tests, see where you rank and share your results with us. In my next part of this series I will outline how to prepare for this test and the academy to ensure that you will be prepared whenever shit hits the fan.

Here’s another test example from Nevada:

John Annillo has worked everywhere from the corporate gym in NYC to the Strength and Conditioning Department at Ohio State University. He's been featured in all of the major fitness publications, developed a couple of iOS Applications, and currently serves as a consultant for various fitness companies. John serves as an advisor on Top Fitness Apps, and for more of his work, visit his website, John Annillo.