The Right Way to Use Yoga for Neck Pain

Varied movement and calm exploration of range of motion could be the key to solving your chronic issue.

Once upon a time, there was a woman named Emma who had chronic neck pain. She tried exercise, pool therapy, stretching, ice, massage, all to no avail. One day, an acquaintance said to her, “I am going to a yoga class. Want to come? It might help your neck pain.”

After a moment’s pause, she said, “sure. What do I have to lose?”

It was a level I class, filled with slow, thoughtful movements. At the end of the class, as they laid back to take rest, she found herself in a calm, reflective state. “Wow,” she thought to herself. “I didn’t think about my neck once during class!”

After four weeks of regular yoga, her neck pain was gone. She sang it from the rooftops, “Yoga cured my neck pain! You should do it too!” She even enrolled in a yoga teacher training program, because yoga had made such a profound difference in her life.

What role does the practice of yoga have in helping individuals with neck pain? How do you know if it’s the right choice for your particular problem? And what modifications or postures should be utilized for those struggling with pains in the neck?

The Science of Yoga and Neck Pain

Chronic neck pain is considered an important global public health problem.1 A review of three randomly controlled trials concluded that yoga appears to be more effective at reducing neck pain and functional disability than not doing anything. However, these studies were considered low quality, leading the researchers to encourage more high quality research get done before any sort of definitive conclusion is announced.

Okay, but what about those people who swear by it, like Emma? There must be something to yoga, right? To answer this question, I enlisted the help of Jules Mitchell, a science-based yoga teacher and educator with a master’s in biomechanics.

“Yoga offers a lot of unique joint positions,” Jules says, “so I do think yoga benefits [neck pain] in that realm. It provides positions that you don’t necessarily get in other activities. You get time to kind of adjust and explore, and be in these positions.”

Yoga Is a Break From the Norm

In a typical, gentle yoga class, chances are pretty good that some point you’ll be on the floor, both on your stomach and on your back. You will probably find yourself on your hands and knees, and hanging forward. There will be side movement, and maybe balancing movements. These are all positions we don’t often find ourselves in during regular life, especially if our life primarily consists of a desk chair and a traditional gym environment (whatever that means anymore). Whenever you introduce a novel position to the body, the body self-organizes in order to figure out how to deal with the load that is acting upon it.2 All of these positions offer a unique load on the neck muscles as they try to figure out how to hold the head stable.

Because you are moving slowly, you have a chance to find a comfortable position; if there isn’t a comfortable position, since yoga is considered an internal practice, teachers will often say, “please feel free to lie down on your back while we perform this Asana if it’s uncomfortable. See if you can imagine yourself doing it in a pain free way.”

One of the things that happens with chronic pain is we lose the ability to imagine how the painful area works.3 Slowing down, moving thoughtfully, and even imagining how the neck moves in concert with the rest of the body are all ways to begin creating a more accurate body map of the neck and its relationship to movement.

Joint Independence and the Eyes

The idea that joints should be able to move independently from each other isn’t new. A joint that can move by itself, through a full range of position, can contribute more fully to quality of movement because it gives the body more options. This concept, called degrees of freedom, was popularized by Nikolai Bernstein in the 1960s.4

The eyes, while not a joint, are critical for maintaining balance. Their movement is often coupled with the direction the neck is moving. By separating eye movement from neck movement, the entire neuromuscular system is given more options. Suddenly, it is possible to move the neck one direction and the eyes another which may reduce tension in the neck area. Postures such as Warrior II offer opportunities for this type of exploration.

Some yoga classes offer suggestions for where to look during the practice or posture. When I asked Jules about this, she said, “I would definitely allow the gaze to alter to whatever is most comfortable for the person. I would also play around with letting the head move in one direction and the eyes in the other. I would definitely encourage turning the head different ways, perhaps, and maybe turning the eyes different ways.”

How Not to Use Yoga

There is a tendency to stretch things that hurt in an effort to make the area feel better. It sometimes provides temporary relief, only to have the area feel like it’s tightening up again, perhaps even more than before.

Finding a way to explore movement in an area without causing additional pain can lessen the nervous system’s alarm response. When there is pain in an area, the nervous system sometimes overreacts. Before you begin to consciously turn your head, for instance, the brain might say, “WARNING: potentially dangerous movement! Don’t do that.” The muscles respond by tightening up and restricting the amount the head turns, limiting the risk of injury. However, if the same person keeps his head still, and rotates his body to the right, the neck might not hurt. Why? The head is still turning, even though the body rotates around it, but because you aren’t consciously saying to yourself, “turn your head,” your brain doesn’t perceive it as a threat; as a result, muscle tightening or guarding tends to be reduced.

Jules advises against stretching into pain: “Most people will have an easier time turning their head over one hand than the other [in Warrior II]. So on the side that doesn’t move as well, trying to stretch it into that position will generally cause more guarding. I would definitely encourage more playful movement; more repeated movement to coax a little more trust and range into the position. A lot of the neck stretches we do tend make things a little more angry.”

The ancient yogic texts say that each posture or Asana should be composed of sthira and sukha, steadiness and ease.5 We often lose the ease part, especially when pain is present. When we let go of being too rigid and allow ourselves to move in a more playful, organic manner, the entire system lightens up a bit. Pushing ourselves into discomfort tends to make the situation worse.

It is empowering to realize you have the control to change your position and possibly alter the experience of pain. Because many types of yoga are slow and thoughtful, the student has time to assess her experience, and within the assessment, change things that don’t feel right. Despite what you may have heard, there is no yoga guru demanding postures be performed exactly the same way, by every person, every time. The same is true of any physical class. Variation is important. If something doesn’t feel right, change it.

Twists, Jules says, are especially good. Even a basic twist, like Bharadvajasana, which can be done seated, can be useful to emphasize shoulder girdle and upper thoracic rotation. “They inform the shoulders and T-spine really well, and that could contribute to a little bit of change in cervical spine movement and habits.”

The neck connects to the upper ribs. In fact, if you turn your head and notice what happens in the neck vertebrae as you turn your head, you will feel movement down into the upper back region. This helps disperse the load of the twist. Postures that encourage that connection tend to be beneficial. 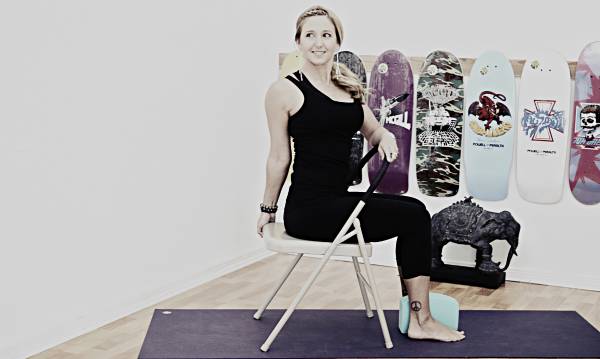 Not All Yoga Is Right for You

There are many different yoga styles, which can be very confusing. Say you go to the doctor about your neck pain. The doctor says, “you have neck pain? You should try yoga.” You march yourself to your computer as soon as you get home. “A level 2 Vinyasa class,” you think to yourself. “I have no idea what vinyasa means, but this should be perfect!”

You meekly place yourself in the back of the class while the instructor barks out orders with hip-hop music playing. You try to keep up with the up/down/back/forward movements, only to find yourself a bit lost. You spend most of your time watching, which is probably a good thing, since you’re not entirely sure this was what your doctor had in mind.

This doesn’t mean this form of yoga should be completely written off. Maybe if you didn’t have any pain, an intermediate Vinyasa class would be right up your ally. But not this exact moment.

So where should you go? “Trying to find what type of yoga is best for you is probably not the best thing to do while you are in a chronic pain situation,” Jules says. “You should reserve that experimental process while you are feeling good. Any sort of level one, gentle yoga. You have time to discover what you like and what you don’t like. You have time to make adjustments, and give you space for inquiry.”

If we think back to Emma, our yoga advocate from the beginning, it was a gentle, level I class that first enabled her to see she could move in a pain-free way. Moving slowly, thoughtfully, and changing positions as needed are the building blocks to moving without pain. Developing a sense of self, improving the ability to recognize where you are located in space, and beginning to tap into body awareness and how you do things is what allows you to explore what it might be like to move in a pain-free way.

The final aspect of yoga which can be beneficial for neck pain is pranayama. This simply means breathing, and when I asked Jules which type of breathing practice she recommended, she answered “supine pranayam” without hesitation. Keep it simple. Count the length of your inhale and the length of your exhale. Observe the breath.

Paying attention to your breath isn’t just for the yoga mat:

Connecting to Training and Life With Your Breath