The Scapula: How It Can Make or Break You

Some things just go together. Peanut butter and jelly. Jordan and Pippen. Cheech and Chong. In the body, the biggest power couple is the ball and socket. But what about the shoulder blade?

Some things just go together. Peanut butter and jelly. Jordan and Pippen. Cheech and Chong. You could have one without the other, but things just wouldn’t be the same. In the body, arguably the biggest power couple is the ball and socket – a term synonymous with the shoulder. But in the body we don’t just have great duos, we have amazing kinetic chains. PB&J would never have made it big without the bread (pre-paleo). Phil Jackson was the one who merged two megastar individual talents into the synergistic backbone of the Chicago Bull legacy. And Cheech and Chong? Well, we all know what their magic ingredient was.

My Shoulder Has a Complex

While the term “shoulder” most commonly refers to the ball and socket mechanism, the shoulder complex actually consists of multiple joints:

Together, this intricate cluster of joints creates the incredible shoulder – the cornerstone of movement through the upper extremity. But like any great team, many do the work while few get the credit. Ask Jordan or Pippen.

The Roles of the Joints in the Shoulder Complex

The glenohumeral joint is the MVP of our shoulder complex. It’s flashy, makes the big plays, and scores all the points. The GHJ joint is the single most mobile joint in the body. But, thanks to the laws of physics, mobility exists at the expense of stability. Picture a golf tee and a golf ball – this is the age-old analogy that best describes the dimensions of the GHJ joint. When the tee is set just right, the ball can sit perfectly centered in the shallow support of the tee. As long as the ball doesn’t keep falling off the tee, you can now step up to the box and drive the ball in just about any direction you want, with the exception of straight down. Works great for golf, but how can such an unstable joint work in our body? Simple. The glenohumeral joint can only be so amazing with the help of the scapulothoracic joint. 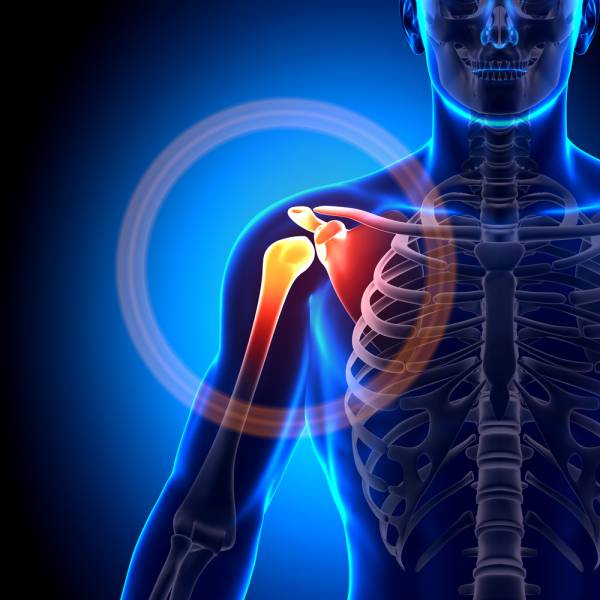 The scapulothoracic joint is the bread to our PB&J, our Phil Jackson to Jordan and Pippen, and the fuel to Cheech and Chong’s fire (or should I say smoke?). Without the scapulothoracic joint, the glenohumeral joint would be rendered useless. The relationship between these two joints is all too often overlooked when addressing the shoulder as focus is instead shifted to the ball and socket (alone) or the scapula (alone). The coupling of the GHJ and STJ effectively links the arm to the thoracic vertebrae meaning dysfunction of the spine can compromise the shoulder – and vice versa.

The Scapula and Stability

Here’s how the dots connect. Starting from midline, the thoracic spine forms a column from which twelve ribs attach. These ribs wrap around in a barrel-like fashion, creating the rib cage. Consider the thoracic vertebrae the foundation under a building and the ribs the floors sitting on top. The triangular-shaped scapula sits on top of the ribs, just as a rug would lay flat on a floor. 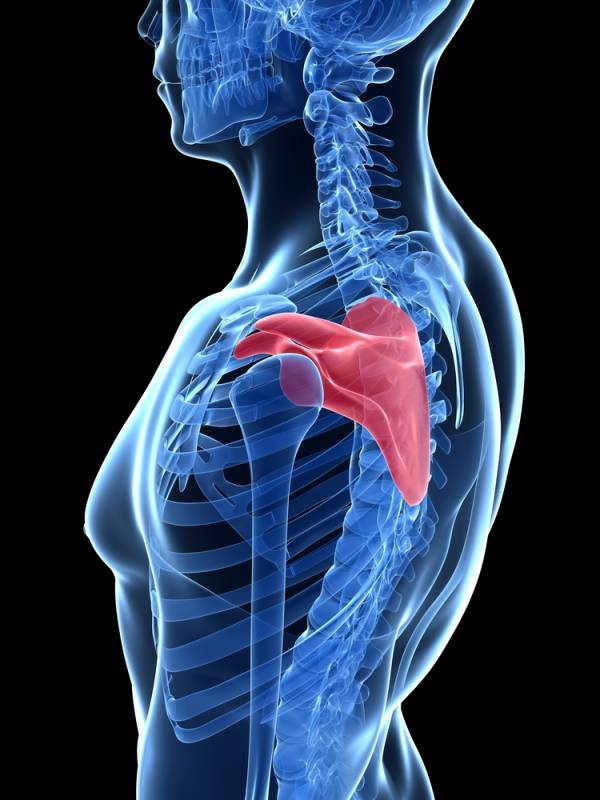 At rest, the superior border of the scapula runs horizontally from shoulder to spine and then turns down at a ninety-degree angle continuing parallel to the spine as the medial border of the scapula. A little more than midway down the spine the scapula turns up, becoming the lateral border as it heads up and out toward the armpit where it meets the superior border to complete the triangle. This junction of the superior and lateral border creates a projection called the glenoid fossa, which you know as the socket. The glenoid holds the ball, which is the rounded end of the humerus bone, to form the glenohumeral joint.

Say we are moving furniture into a building. We require that a solid foundation provide the base for our building. Then, flooring would need to be installed so that we can lay down a rug. Only after these steps are taken – in this order – furnishings can be brought in. Similarly, we must ensure a stable spine and ribcage for the scapula to sit on so that it can in turn be a reliable support for the arm. Stability at each and every link along this kinetic chain is necessary for function as a whole. Without Jordan bringing his A-game, Pippen performing to full potential, and Phil Jackson calling all the right plays there is no three-peat championship for the Chicago Bulls.

The Muscles Involved With the Shoulder Complex

The good news is that we are much more like the Bulls than a building. While we ideally have “good bones” like a building, that’s where the similarities end. We are more than a skeleton. We don’t sit idly. We don’t break and not bend. We are dynamic. We act and react. We can take our sturdy foundations and move them in all kinds of ways, producing amazing feats – like drilling the game winning three-pointer at the buzzer. But, as important as our bones are, we can only control what they do with our muscles. When it comes to operating the shoulder complex, the rotator cuff, scapular stabilizers, and core muscles are in charge. Without these muscles, we are just an idle structure. 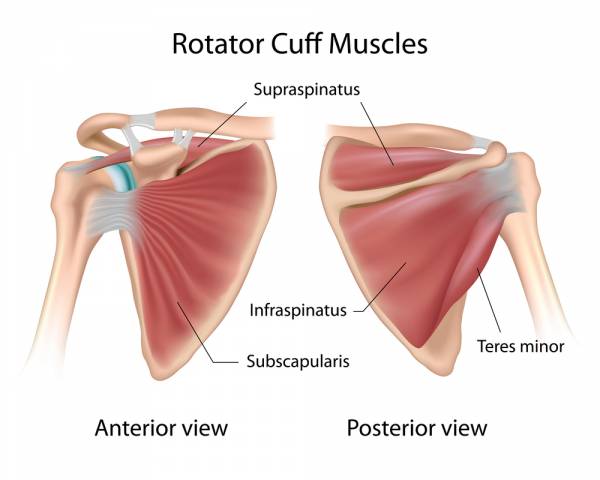 Stability of the glenohumeral and scapulothoracic joints occurs in a specific order. First, the thoracic spine moves (or doesn’t) thanks to our core muscles. Then, our scapula is anchored to the spine and ribcage via several different stabilizing muscles. Lastly, the rotator cuff travels from the surface of the scapula, crossing the glenohumeral joint to hold the ball into the socket. Centered around the scapula, these three groups of muscles work together as a kinetic chain connecting the core to our upper extremity. The scapulothoracic joint, as a result, is the key to the shoulder. Insufficient stability of the STJ is the main ingredient in the recipe for disaster – and not just at the shoulder. Inability to control the scapula can lead to neck pain and headaches. Weakness of the shoulder blade not only decreases the ability for the arm to function, but it can also bring us down, literally. A slouched posture and overextended spine can both result from weakness at the scapulothoracic joint.

Control your scapulothoracic joint, and you control your ability to make gains with strength and power, abolish or avoid pain and dysfunction, and most importantly, take a huge stride toward mastering the complexity of human performance. I’ll show you how controlling your STJ is easy.