The Secret Pact of the BJJ Fistbump

To me the fistbump or handslap that begins a sparring session in BJJ means more than just, “I’m ready to begin.” It signifies a pact between two teammates for a bigger goal.

Every now and then a reader will suggest a topic for me to write about. My usual response is to thank him/her and then suggest that s/he write about the topic him/herself. As often as not, the reader will write something, but sometimes s/he will persist in wanting me to write something, at which point I have been suggesting a jointly-written piece. In the case of today’s article, the collaboration went great. A reader wrote in with a great idea and agreed to co-author a piece. He wrote a draft and then it was my job to edit and modify as I saw fit.

The thing is, I don’t think it needs to be modified. (As I say, great collaboration.) So, since he asked, and since I think this is a compelling topic, below is the article this reader wrote about the fist bump/hand slap grapplers usually perform at the beginning of a training round. The reader’s name is John Nygaard, and he is a major in the United States Air Force, currently assigned to the Pentagon. In addition to running the Pentagon Combatives Club, John has been studying BJJ at Fifty/50 BJJ for eleven months.

Thanks for reading, commenting, and writing, John. Here goes:

It’s one of the most common moves in BJJ and submission grappling. Most of us do it every time we roll. And I’d argue it’s also the most overlooked move there is. I’m talking about the handslap/fistbump between two individuals that almost always kicks off a sparring session. I’ve always been curious to know how many of us who practice the art of BJJ and submission grappling have actually taken a few moments to ponder what it means.

My hunch tells me that many people have given it little thought, regarding the handslap/fistbump as nothing more than a universally accepted means of stating, “I’m ready to begin.” It establishes some level of synchronicity between sparring partners so that one does not begin prematurely and catch the other off guard (either by mistake or by intentionally being at least a little deceitful to gain an advantage). For others, it may at times simply mean, “Bring it on.”

But to me, its meaning is much deeper and much more serious than either of those.

I view the handslap/fistbump as a very similar pact between my partner and me. This pact is a statement to my sparring partner where I am conveying to him/her, “I agree to make your safety my top priority, and I also agree to do all I can to facilitate your learning.” First, I don’t think the safety aspect of this pact can be overstated. Whether you’re simply beginning a light flow roll or preparing to test your limitations to the fullest extent over the next few minutes, safety in this art takes on more significance perhaps than in any other unarmed martial art. After all, you and your partner are essentially fighting without strikes.

The physical feedback, as we all know, is immediate and often crushing. Letting your partner know that despite doing your best to break them down, subdue them, and force them to submit or face unconsciousness or injury, you intend on making this experience safe, positive, and productive can place them at ease, earn their trust, and facilitate a mutually beneficial experience. This is critically important to me because my mat time is quite limited. I strive to make the most of each session. And that includes conducting myself in a way that mitigates as much as possible both injury and injuring, which would otherwise translate to days and even weeks of begrudging absence from the mat. 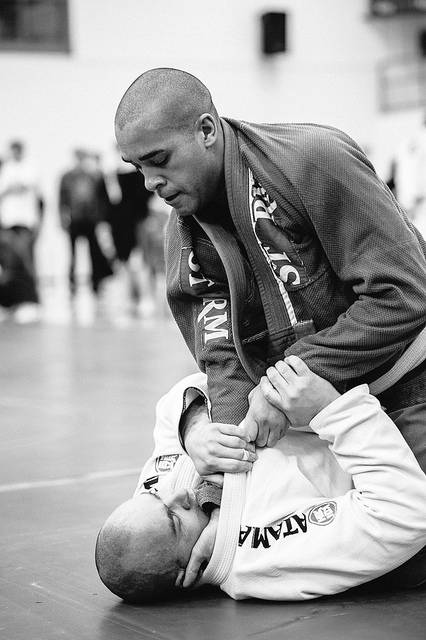 The other aspect of this pact is the learning. I am very eager to learn with each sparring session. And as I’ve already stated, mat time for me is at a premium. I can never seem to get as much as I want. So I’m always looking for ways to maximize the time I spend during each class. And the interesting paradox I have found is that by placing the needs of my partner ahead of my own, instead of taking a purely self-focused approach, I actually seem to improve my learning curve, which, as a white belt, is quite steep. But it’s difficult to remain in this mindset as the adrenaline begins to flood your system.

There are several things I try to recite in my head as I roll. It has to be a very deliberate recitation, too, because I forget them with embarrassing ease. The first is to remember to breathe, preferably in an even, controlled manner. The second is to remember not to go for the tap – the kill, the finish – but to focus on properly executing the technique I’m doing right that second. Whether it’s a guard pass, stripping my opponent’s hooks, or bumping out of side control, focusing intensely on execution rather than the end result of what I’m trying to achieve should be at the forefront. But if I also roll with the mindset of, “What is my partner trying to do? What are they trying to achieve?” then I’ve found I’m able to learn simultaneously with my partner, rather than individually with a singular stream of input and feedback.

The handslap/fistbump, with its implied agreement, helps me start off a sparring session correctly, enabling me to frame those things as readily accessible in my mind – even in the midst of excitement and, at times, panic.

Hopefully taking this quick little gesture a little more seriously, giving it more thought as to what it means to you and what it can bring to your game (and your partner’s game) will help you achieve what you’re after – efficiently and safely.