Anyone can make a workout hard. For instance, do some sprint work, and make it harder by super setting it with another full body, high intensity lift. Go try a set of three heavy, nearly all out reps in the clean – full squat cleans – and then run 200m flat out immediately after. That’s going to be awful and aside from teaching you how to run slowly or lift sub-maximally all it is going to do is make you suffer.

The problem is that people have taken their misguided notion of “go hard or go home” and made it the trump card for everything they are trying to achieve. Because let’s face it, personal trainers like making clients sweaty because then the client walks away feeling like the workout was beneficial. The only problem with that is in six months time that person is still going to be not much better physically than they are right now (and realize, I don’t care if they’ve improved “a bit” as I am only interested in achieving the best for people and getting them close to their absolute maximum potential). Personal trainers need to learn the key phrases in our watered down world of fitness are not “cardio,” nor “intensity,” nor even “conditioning.” The key words are “strength and conditioning” and you’ll notice that strength is first and foremost.

To train for strength – which also relates to power and speed – there is a right way and a wrong way to structure a session. Let’s cut to the chase and look at the way I structure my clients’ training sessions:

Let’s turn this into a sample training session where we are going to do jerks, presses, swings, some running drills, and some Primal Move. Here’s the smartest way to put this together to gain maximum benefit from each of the exercises:

In the workout above jerks are obviously our prime exercise for the session. Other work is being done, but jerks are the one we would really be chasing in this workout. But what if we wanted to keep the exercises the same, but were after an increase in pressing instead? We could use the same warm up as above, but instead use presses as our first exercise after the Primal Move and sprint drills. After finishing all of our presses, if this were me, I would choose to do heavier swings than in the option above – something like three to five sets of ten with heavy doubles. This would allow me to work at a much higher intensity than the previous option and use more weight – always a good thing.

But here’s where it gets interesting. What if I decided to use my jerks as conditioning, in the place of swings? There is plenty of research to show the long cycle clean and jerk to be a great conditioning tool, which also provides the infamous kettlebell WTH effect increasing multiple fitness qualities at the same time.

I actually have done this exact workout, in both forms, and benefited from both. If I were using the second protocol I would do shorter timed sets of long cycle clean and jerk. I am not into marathon efforts over three-plus minutes. I prefer to go for up to three minutes, using an equal work to rest ratio and train heavier. Typically I cycle between one, two, and three minutes of work using appropriate sized bells, resting the same as I lift for a total time goal of ten minutes of lifting (e.g. up to six by one minute, five by two minutes, or three by three minutes). This takes about twenty minutes because of the rest periods. But imagine how light I would have to go in my pressing if I kept the order the same as in the first option? Likely I would be lifting at about fifty percent of my capabilities and that isn’t going to help me gain strength at all. 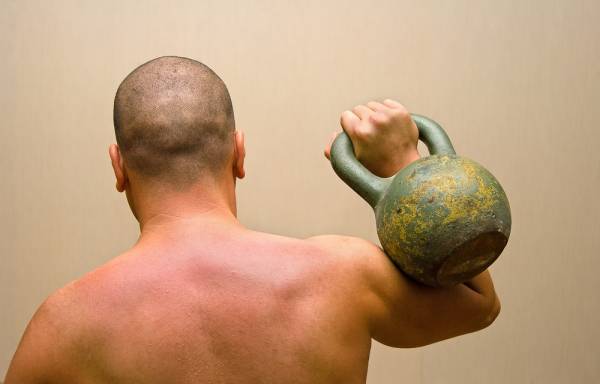 And that’s where most people fall down – for starters their sessions don’t have a real focus. The focus in the first option is to increase my jerk and all the requisite qualities that go with it. In the second option I am trying to increase my press and using the jerk as my conditioning tool. While there is some merit in placing your weakest link first to give it attention, what often happens is you end up trying to save energy for later in the workout, putting out less than your best effort.

There is no room in training for that – every exercise must be all out so that maximum effect is gained. No good doing sprints – something that is to supposed to make you faster – and running them slowly because you’re exhausted from a longer run previously (seriously, why does anyone finish a distance workout with sprints?), lack of adequate rest, or placing them at the wrong point in your workout.

The goal of training is not to make yourself tired or sore. The goal is to make you better tomorrow (or maybe the day after tomorrow) than you were today. Placing exercises in the correct order has a massive effect on the benefit you will get from training.