One of the most famous sports records of all time is the four-minute mile. In 1954, Sir Roger Bannister did what was until then the unthinkable, running a mile in 3:59.5. Just two months later, Australia’s John Lander joined Bannister to hit the mark. Now sixty years later, the sub four-minute mile pace is the norm for male professional milers.

What is the explanation for such rapid and dramatic improvement in human performance? Certainly technology has improved, as has the science and understanding of human genetics. Of course, the human body itself has evolved with innovation in how we train, what we eat, and where we reside. Even our mindset has expanded and changed. Many believe the only limit to the human body is what the mind imagines possible.

At the crux of modern accomplishment in sport lies a hotly contested and age-old debate – that of nurture versus nature. Are we born with a certain skill set or do we perfect skill through our attitudes and environment? Sports Illustrated senior writer David Epstein sought to tackle this question in his recent book, The Sports Gene.

Epstein presented both sides of the debate in his readable and balanced book. Though the narrative at times is heavy on data and a bit science based, for the most part, the book is enjoyable and reads like a story. The Sports Gene is full of page-turning anecdotes and scores of real life examples. Telling stories about everyone from Kenyan runners to Jamaican sprinters, David Epstein presents a thorough analysis into the question of whether certain people or cultures are born athletes.

Nothing exemplifies the American spirit more than a can-do attitude. If you can dream it, you can achieve it. Our culture teaches us from an early age that nothing is impossible. Of course, there are limitations no matter what your outlook, attitude, or drive. For instance, no matter how much you practice basketball, playing in the NBA is pretty tough if you’re 5’5.” Still, many of us like to think we can make anything of ourselves as long as we’re willing to work for it.

In agreement with that idea is another book on nurture versus nature, Malcolm Gladwell’s Outliers. Gladwell contended that 10,000 hours is the benchmark for mastery of any given craft. The book is based in part on a study done by K. Anders Ericsson. Ericsonn’s analysis concluded that the genes necessary to be a star athlete or any other star are “contained within all healthy individuals.” Therefore, the necessary element for stardom or mastery is to start early and surpass 10,000 hours of practice. In Ericcson’s conclusion, it isn’t being born with talent so much as the notion of practice makes perfect. When it comes to the world of sport though, I think that’s a hard argument to make.

Is There a Sports Gene?

In The Sports Gene, Epstein dives into many genetic factors, from prevalence of muscle fiber type to sport-specific body types. Epstein’s analysis considers a broad scope of individuals from child athletes up to top professionals. He also looks closely at the differences between ethnicities, cultures, and genders. Such topics are not always easy to tackle in this era of political correctness. Controversial or not, the book presents a factual analysis on what science says. To that end, the book offers some convincing facts when it comes to differences among us, genetically speaking.

There is plenty of data to suggest that your body type has a lot to do with the sport at which you are destined to excel. For instance, being tall has a lot to do with success at a high level of basketball. In fact if you happen to know a man 7’0″ tall (or taller) in the United States, there is a seventeen-percent chance he plays in the NBA.

Furthermore, not only does body type, muscle fiber, or even eyesight have much to do with athletic prowess, but your body proportions have even more to do with your sport proficiency. Consider that Michael Phelps, arguably the most dominant swimmer of the modern era, is seven inches taller than Ethiopia’s Hicham El Guerrouj who is the world record holder in the mile run. What is interesting to note is that despite the disparity in height between these two world-class athletes, they both have the exact same inseam measurement. Phelps is custom-made to slice effortlessly through the water with his incredibly long torso, while El Guerrouj is born to run with his long limbs. 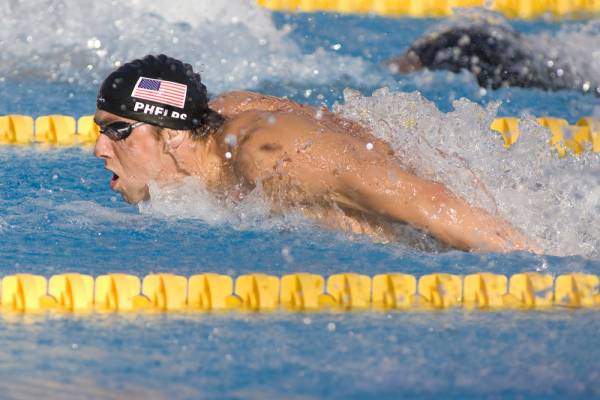 Body type has to do with a number of factors, but none more so than geography. Consider that seventeen men in U.S. history have run a marathon in faster than 2:10. But 32 men from the Kalenjin tribe in Kenya recently accomplished the feat – in the span of just one month. We see the same phenomenon with other groups, from Dominican baseball players to Samoan football players. The statistics strongly suggest that being born in a certain place with a certain body has a lot to do with which sport you can or will excel at.

Born to Run or Driven to the Top?

So what is the ultimate conclusion of The Sports Gene – nurture or nature? The answer lies somewhere in the middle, within the vast shades of gray. While everyone loves an underdog and the gritty player who makes the team despite a seeming lack of athleticism, the reality is those stories are rare in the world of competitive sport. Genes matter, as we see demonstrated in almost every sport from the hardwood to the running course.

The Sports Gene ultimately suggests that you need a strong dose of both nurture and nature to succeed as a high-level athlete. Yes, there are exceptions to the 10,000-hours rule, as there are exceptions to people playing in the NBA at less than six-feet tall – but not many. The analogy Epstein uses is that of computer hardware and software. You might have the best hardware in the world, but the best computer is utterly useless without the right software to run it. The opposite is also true.

The Sports Gene is available for $15.63 at Amazon.com.