Does the old adage “No pain, no gain” have any validity? The answer is that it depends. It really depends on the type of pain and the type of gain you are talking about. Let’s look at the pain first.

In weightlifting and in life in general there are two kinds of pain. One is the pain you get with an acute or chronic injury. This pain is not pleasant and serves as the body’s warning that there is something wrong and some action will be necessary. If you end up with sore joint ligaments and muscle tendons, then that is pain that must be avoided. If this occurs you will sooner or later have to suspend training. This will put a stop to progress. So forget about that kind of pain.

The other kind is the pain of effort or hyper-exertion. In turn there are two distinct kinds of pain encountered here. One is the day-after soreness experienced whenever you overdo things. Every human being has some familiarity with this, especially as you age, it seems. The other is the pain of effort during exertion.

Looking at the former first, this is merely the breaking down of muscle fibers that will quickly be rebuilt stronger than before. Unlike injuries, this pain is not as sharp but somewhat duller. The lactic acid builds up and the next day is greeted with soreness. It’s even worse the second day. But by the third day recovery is well on its way. Eventually the soreness is both less with each workout and also less noticeable when it does occur. You get used to it. This kind of pain is not usually as unpleasant as the acute kind. It may frighten newbie trainees, but even they soon learn that it is nothing to fear.

Now, the pain of effort – that is something else. A new trainee is often exercising muscles he or she has seldom used before. To those unaccustomed to heavy training it may seem rather daunting. Many are shocked and want to quit right then and there. If trainees persist, however, they will hopefully realize that what they feel is not even pain, but is really just the feel of unaccustomed effort. And that cannot only be gotten accustomed to, you can learn to enjoy it or at least welcome its challenge. Eventually the pain will not be noticed, and it will be taken for granted.

To that end I remember the words of Fred Lowe. Fred was one of the United States’ greatest middleweights back in the 1960s and 70s, and he still making life miserable for masters lifters today. In a conversation about why our sport is not as popular as it might be, considering the huge number of people now lifting weights for some form of physical training or fitness, Fred put it simply that, “Champion weightlifters are no different physically from others. They are just willing to train with weights that are beyond the comfort level of the average person.” Many like the macho aura that lifting weights gives them so they flock to the fitness centers. But few want to put in the sweat equity that will produce the results they want. 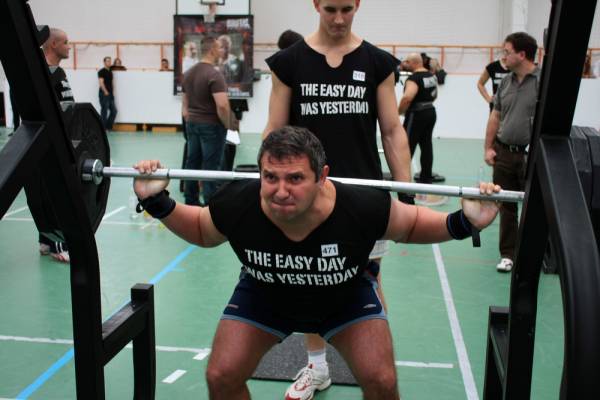 I agree with Fred. If you forgive me I will use myself as an example. In my youth I made a squat of 470 lb before giving up heavy lifting. Years went by and it started to bother me that I had never broken the 500 barrier, of which I had always dreamed. By then I was 45 years of age and decided that I wanted to do this quarter tone once and for all, before I got too old to even try. Friends said I would never do it. With that I grimly bought some knee bands and made my belated return to the gym.

I was always gifted at squats (and not much else). My training consisted solely of a couple warm-up sets and only one work set of eight reps with as heavy a weight as I could handle. With that strategy I started with 275 and added ten pounds each week. It felt a bit tough at first since I was only accustomed to doing that for fives in Olympic fashion. The next week I went to 285 and still made my eight reps and it still felt heavy. I went to 295 the next week and I still made my eight. It didn’t feel any lighter, but oddly enough it also didn’t feel any heavier either. I took note of that.

As the weeks went by the weight went up while I figured that I would have to slow down sooner or later. I had never squatted these kinds of reps with that kind of weight before, but they never seemed to approach my supposed limit. I was setting personal records of a sort by then and I was getting motivated to do more.

It was around this time I had the conversation with Fred and thought about his advice to ignore the pain of effort. I decided that pain or no I would keep at it. I finally did my 505 (I wanted to lift five big ones on the bar) when I got to 345. In only seven weeks, seven workouts I had finally done my 500. By then I was revelling in the effort and continued. I finally stopped at 520 for eight. I did 600 for five on my 46th birthday and made 660 for a PR three weeks later. I was now squatting what the power champs were doing in my youth. And no, I never “took anything.” 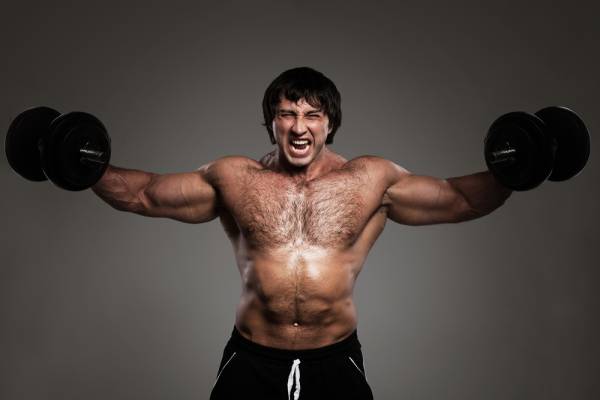 Naturally this was very elating. It all taught me something I wished I had learned thirty years earlier. That was that great success could be had if the fear of exertion could be overcome.

That said, what about the “no pain at all” admonition? This is where the gain part must be defined. Strength gains and the associated effort required for a general fitness trainee will not even be noticed by a competitive weightlifter. However, a top lifter’s light recuperation phase will lay out an average exerciser after only one workout. Your goals determine what level of gain and pain will be required.

On the one hand you can indeed train without getting to a point where any significant effort is felt. But progress, assuming any is made, will of necessity be very slow. The body is not stressed enough for any significant adaptation to occur. But that may suit some trainees just fine, if their ambitions are modest. A light routine that is done regularly is still better than no routine done at all.

On the other, if you are more ambitious, you will have to put in much more effort. You can call that pain or you can call it strenuous effort, but it will take some work. The rewards will also be much higher. Pain level and gain level, the choices are yours.