Paul Wade, the author of Convict Conditioning, has a lot to say about isometric training and exercises.

Isometrics is about easily accessible and yet outside of a dedicated group of practitioners, not something that gets much press. It’s a shame because isometrics has broad applicability for all populations of strength trainees including novices and seniors.

That’s because isometric exercises force you to stay in your lane. By that I mean that they are not like lifting a barbell or dumbbell in so far as you can’t overload, or under load, an isometric set and the risk of injury is, overall, much lower than more traditional exercises.

Isometric exercise is only as effective as the effort and the effort can only be felt if you are properly positioned to create the tension demanded. That doesn’t mean you can’t screw up an isometric exercise but you have to be pretty motivated to get it wrong.

What is Isometric Exercise?

Isometric exercise relies solely on the creation of tension with concentric contraction of the muscle against an immovable object. That object may be a device like the isochain, it may be a door jamb, and it may be your own body.

Invariably, any discussion of isometrics will refer to the seminal study done by Hettinger and Muller in 1953 (Muscle capacity and muscle training). The German researchers found that a single daily effort of two-thirds a person’s maximum effort for six seconds at a time for ten weeks increased strength by about five percent a week.

Melody Schoenfeld wrote on these pages that isometrics is working at standstill or the the act of using force against resistance without changing your muscle length. For example, holding a bicep curl at a 90-degree angle for 30 seconds.

Logan Christopher wrote about legendary strongman Alexander Zass who was a big proponent of isometric exercise who believed the secret of isometric training was that it stored energy instead of dissipating it, and that it allowed him to work against very strong resistance helping to build up his stamina.

Zass had little to no access to weightlifting equipment in his life. He was a strongman who bent bars and broke chains. Bruce Lee was also known for his isometric work, as noted in Bruce Lee’s 3-Minute Workout by Shane Trotter.

Unpacking The Mysteries of Static Training 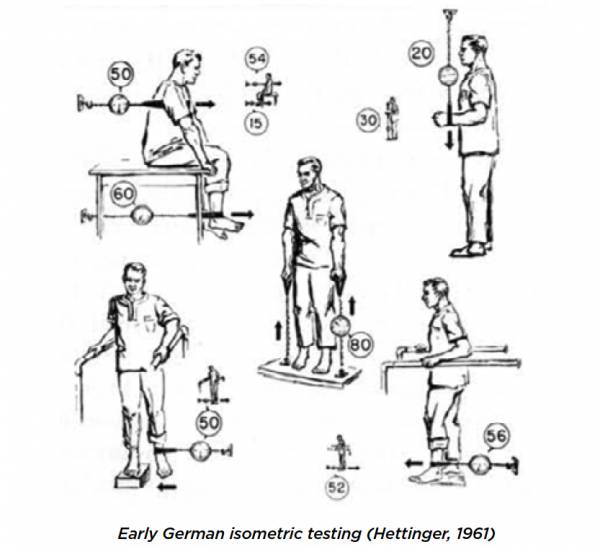 Let’s get the biggest criticism of this book out the way: it’s a little overwrought in promoting the Isochain, an expensive isometric training device that isn’t being reveiwed here and isn’t needed to enjoy this book or take advatange of it.

You’d think that Paul Wade, the guy behind no equipment workouts would be less inclined to push a piece of equipment, but to be honest, his publishers should have done a better job of addressing this one minor flaw of the book.

To put it in perspective, this ebook is just under ten dollars and has plenty of great information and exercises that don’t need the Isochain. I’ll be generous and give the Isochain infomercial about 50 pages of overexposure, which leaves about 400 pages of other stuff.

Otherwise, I stand by my nerding out statement. I have a reference for isometric training. I have enough information to make an intelligent decision about its efficacy, and I have plenty of examples of how to apply isometric exercises.

More importantly, there is enough information here to justify exploring how isometric training can help increase weight and reduce the chance of injury.

I asked an older friend of mine, someone who is quite sedentary, to try 10 minutes a day of a set of isometric exercises that I had improvised for him during the lockdown, while he was working from home. Based on my sample of one, the impact of phenomenal.

Whether it was the 10 minutes a day only part of the routine or the actual palpable increases in strength that he experienced, my friend was sold and actually go the book himself.

Like everything else in the fitness industry, there are cycles, fads, and fashions. Isometric exercise isn’t fashionable or faddish, but it may need to have a refresh cycle and demands some modern-day appreciation. Paul Wade’s book may be all you need to freshen up your isometrics.